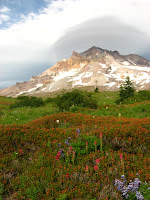 At the end of August, just before I left for a month in Europe, Mike and I hiked to Paradise Park, on the southwest flank of Mt. Hood. We started late and hit the trail at Timberline Lodge at about 1 pm. Right off the bat, we miscommunicated and followed what we thought was the correct path to the Timberline Trail. We missed the intersection and climbed instead to the Silcox Hut high above the ski slopes. The frustration at climbing 1000 extra feet over an extra mile and a half was more than compensated by the views - from the hut, at 7000' elevation, we could see all the way to the Three Sisters, and the Mt. Hood summit appeared so close it felt like we could reach up and touch it. A cold front was slowly moving in from the west, so we bounded down to the Timberline and headed west towards the Paradise meadows.
The trail gradually descended through sparse stands of time-worn trees and little meadows filled with flowers, and crossed a number of creeks. Many of the creek beds were still filled with snow, and the streams started flowing below us, further down the mountain. The fact that such large canyons are formed from what, in summer at least, appears to be a small amount of water is humbling, and kind of puts me in my place. I'm not so big, not so old, not so powerful and important - nature has been carving these canyons for centuries, water has been coursing through these channels for hundreds of winters, and the ancient hemlocks and firs have been sending out roots and breaking up stones into soil that supports plants and wildlife that, like me, flowers and breathes for only a brief time. 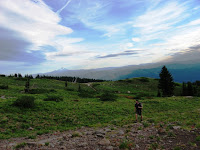 The mountain was truly majestic.
At Zig Zag overlook, I was again reminded of my relative size when I gazed down the massive chasm to the tiny creek flowing below. The trail dropped almost 1000' to a log crossing of the creek, then climbed back up another 1000'. Up top, the weather was cool and breezy, but as we descended through layers of changing forest it grew muggy from warm air rising up the moist valley. Parts of the trail reminded me of lush Gorge trails, quite different from what we'd been hiking through.
The ascent was a chore, but once out of the valley, we hiked around ridges, steadily climbing until we reached a beautiful creek with a clear shot of the mountain above the little valley. The water cut a cliff near the trail and there is a cool campsite right on the edge, with spectacular views and the sound of rushing water. No fires allowed, though! 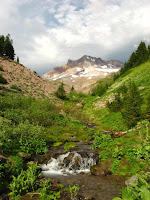 Just above that, we reached the foundations of an old stone shelter, another couple of campsites, and then we crossed into Paradise Park. As we rounded the last few ridges the meadows grew more vibrant with color: paintbrush and lupine in abundance, but also myriad bunches of white, pink, and yellow flowers, some beargrass, and one of the coolest looking plants ever, the western pasqueflower. It looks like a little Dr. Seuss plant, and it feels very soft, almost like moss.
The meadows opened up, the treeline fell away, and the views extended all the way from the summit to hundreds of miles south. I love hiking this high up over all the ridges and Cascades, but the mountain drew all of our attention with a massive storm front backed up behind it. Jagged spires of greenish tan and rust-colored volcanic rock thrust skyward between white glaciers and snowfields dusted with brown and ochre rockfall. Dark purple-gray clouds formed a backdrop against a massive lenticular cloud that swirled clockwise around the peak. The sun broke through the low clouds pushing in from the coast, and the evening light was magnificent as we approached a massive black and gray boulder, perhaps 20' high, that sat isolated in the meadows. 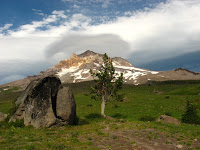 It was cracked like an egg into three jagged sections, and a lone tree (a la Caspar David Friedrich) stood in its lee. The meadows rolled on, broken with small outcrops of stone, and the absolute remoteness, the time of day, and our fatigue made me wish more than ever that we'd brought tents and overnight gear. We lingered for a while and finished our last IPAs until it grew so late we worried about getting back. Eventually the western storm front made the decision for us - the valley bottoms were slowly filling up with dark clouds. We hiked back down to the Zig Zag canyon, fought biting flies climbing out, and then hiked the last few miles in growing darkness before we reached the truck just minutes before we'd need to get out our headlamps. The microwave station popping out of the gloom looked like an Imperial base on Endor, the motionless ski-lifts were strange rips across the sky, and ethereal and ghostly lights and soft noises issued from Timberline Lodge. 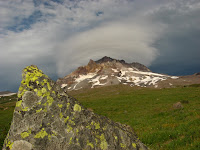 All in all, a great hiking trip. Paradise Park had been free of other people, and most of the people we say on the trail were heading opposite our direction - except for the long-gray-haired old man with leopard-print gaiters and an old external frame pack. We drove back in the rain and went straight to the Horsebrass and knocked back pints of Ninkasi Tricerahops Double IPA before retreating to the house to watch the Olympics’ closing ceremony. Which resembled Willie Wonka on a sheet of acid, but maybe that was the beer, and certainly it’s a story for another time.
Posted by Jason E. Weeks at 12:57 AM
Email ThisBlogThis!Share to TwitterShare to FacebookShare to Pinterest
Labels: Hiking, Outdoors