Strange things are afoot in the Columbia River Gorge this week.

The Multnomah Falls to Wahkeena Falls loop is a quick, short hike, perfect for spur-of-the-moment excursions and a fairly easy way to get your blood pumping and see some of the best scenery the Gorge has to offer. It starts off crowded, at Multnomah Falls, and climbs past the sightseers and day-trippers through a gorgeous canyon and a nice path through the forest before dropping into the Wahkeena drainage, with two beautiful falls and a great overlook above the Columbia. Add a few connections with other trails and it becomes a jumping-off point for even more exciting hikes. Apparently, the area around this loop attracts far more than just your average day-hiker.

I usually hike this trail in spring or fall, when the weather improves or when the vine and big-leaf maple change colors. It’s too crowded in summer, especially considering all the other hiking options summer offers. Last Monday, a day that was supposed to be cold, overcast, and rainy, a good friend called, woke me up to the nice weather, and put the idea in my head. I grabbed my pack and was on the road within thirty minutes. 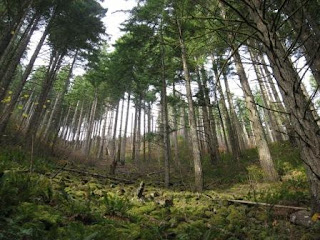 Past the top of Multnomah Falls, the trail climbs gradually up the creek, along a steep hillside covered in ferns and moss and cliffs. Sometimes the trail is right next to the creek, rushing past mossy boulders in cataracts and rapids that empty into quiet gravelly pools. Other times the trail is high above the tumbling stream, cut into the canyon wall with views down into the stream-bed and overlooking mossy maples and tall cedars. Snow covered many of these stretches of trail, an old icy snow packed hard by passing boots and covered in places by deadfall and twigs, needles and leaves. All the while the sound of water echoed from the creek and twisted up into the firs manning the slope like sentries guarding the secrets of the canyon, making the steep ascent from the crowds at Multnomah Falls well worth the effort.

I’d left my trekking poles in the truck, much to my chagrin – some of the snow banks were icy and a slip would’ve meant a slide down the hill. The trail was muddy and slick but otherwise passable, though some minor landslides made things interesting just below the intersection with the trail leading to Wahkeena. I waited for a while at the intersection to give two other hikers a little distance, then climbed up the ridge and hiked about half a mile towards the Wahkeena Falls trail. That’s when I saw the clumps of fur.

The fur lay in a small area that extended across the trail and down the slope. The fur was grayish, with darker roots, and I though that maybe a dog or two had gotten in a scuffle. But 20 feet later, as the trail curved around a small ridge leading up to a mossy basalt outcropping, I noticed more fur. Intrigued, I left the trail and followed the clumps up the hillside. The trail curved around about 180 degrees, and on the top of little hill between the curve I found more clumps of hair, clustered around a flat area where a strange green pile lay between deadfall. The green pile looked like horse manure, but horses aren’t allowed on this trail, and even if someone had taken horses up here, there was no other evidence of their presence. The hair lay over this strange green pile, and little depressions on the slope testified to the passing of some animal in the recent past.

What is this mystery? The only plausible solution I can come up with is this unbelievable scenario: the clumps of hair belong to a deer killed by a cougar, and the strange green pile was early-season bear scat, which, when dry, can resemble horse manure. But the odds of finding both a cougar kill-site and bear scat in the same place are astronomical… I continued on up the trail.

At the intersection with the two Wahkeena trails (they join up further down) and the trail to Devil’s Rest, I met the two hikers who’d been in front of me. They were smoking cigarettes and the young woman was trying to figure out where they were from a book that looked to be 20 years old. Since I usually use this intersection as a break-point, I asked if I could join them and I drew a map in the pine needles, recommending the left-hand trail that passes close to Wahkeena Spring. They left, and again I gave them some time before taking the same trail as it descended past the spring and down to Fairy Falls.

I never saw them again.

Just below Fairy Falls, I found an animal print in the muddy trail. Mixed among the many boot-prints were three paw-prints, one very distinct. At first I thought they were from a dog, until I noticed there were no claw marks. Dogs leave claw marks in clearly-defined tracks. Cats, with retractable claws, do not. And the only cat big enough to leave the prints I saw is a cougar: 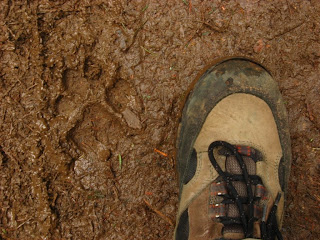 The weather had been rainy, and I’d heard from other hikers that the trail had been very muddy for two weeks. In the area where I found the prints, the trail was muddy and soft, with many clear boot-prints. Most had washed away, leaving only patterns and shallow depressions in the earth. But these prints were deep, clear, and placed directly over the other prints – clearly, very fresh. And there were no other similar prints along the entire trail – in other words, no obvious dog prints.

I took a few photographs and moved on. Cougars will stalk hikers, and in winter, when food might be a bit scarce, I didn’t want to hang out, especially without trekking poles. Wahkeena canyon is one of those narrow places where a cat might stalk a deer and pounce from above. I didn’t want to be mistaken for a meal.

But I descended without incident the steep switchbacks above the bridge past Wahkeena Falls, and walked through hail along the trail above the historic highway back to my truck.

That was Monday. On Wednesday, I posted a trip report on portlandhikers.org, asking for confirmation on the cougar track. Within a few hours, someone agreed that the print was a cougar, and then someone posted a reply about a body found on the same trail as I’d hiked. I freaked out a little – I never did see that couple again, and that print was fresh… News was scarce – apparently a young man had been found dead just off the Wahkeena trail. But by 11pm, the media reported that the man was dressed in underwear and nothing else. By Thursday, they reported he’d died of hypothermia.

Also on Thursday, someone posted to portlandhikers.org that the strange green pile could very well be bear scat, and someone else reported seeing a deer-kill on the same trail a week before. I also read a news report of a hiker on the Washington side of the Gorge who was beaten, carjacked, and left for dead. A second news report described an apparently delusional man who blocked a side road with his car and tried to elude sheriff’s deputies by climbing to the top of a 40 foot waterfall a few miles west of Multnomah Falls.

I think I’ll take cougars any day. And my trekking poles. No more leaving them in the truck. Snow, large predatory mammals, violent criminals and the mentally unstable – next time, I’ll be better prepared for the wild, wild world of the Columbia River Gorge.
Posted by Jason E. Weeks at 12:13 PM
Email ThisBlogThis!Share to TwitterShare to FacebookShare to Pinterest
Labels: Hiking, Outdoors