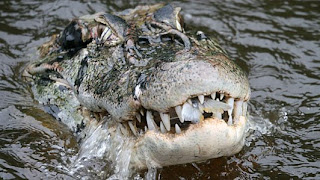 Ali Gator sat on his butt, looking at the other animals with beady little eyes cold and hard as glass. Jagged teeth lined his jaw, a powerful maw that could crush the life from even the toughest alpha predator. But as I watched him, I knew that his teeth were all show. I knew his jaws were stitched shut. I knew I could sleep through the night with nothing but a sheet between us, because Ali was a stuffed animal nine inches tall, and I was his seven year old owner.

Somehow my imagination turned the fiercest animal in my collection of stuffed animals into the one of the nicest of the lot. In the imagined hierarchy of animals that my brother and I shared, the alpha male was a floppy blue donkey named Blue Donkey, and the alpha female a one-eyed rabbit named Amy. They ruled by virtue of age, having lived with us longer than our memories. Ali was just another member of the pack.

I remembered Ali this morning while booking hostals in Peru. After Cusco and the Inka trail in the Andean highlands, I’ll fly to Iquitos, deep in the heart of the Peruvian jungle. Iquitos is accessible only by air or by boat, having reached the heights of glory in the days before someone discovered a process for synthesizing rubber. Now the town is a tourist hotbed, offering lodges and expeditions deep in the Amazon, and ayahuasca ceremonies deep into the mind. Ali Gator would fit in here – his eyes would glow and gather with the eyes of caimans during nocturnal wildlife hikes, and he’d acutely feel the diminishing presence of his brothers while observing the stuffed animals hanging on tour agency office walls, and watching tourists stuff themselves on his relations at river-front market stalls.

Ali sparked my imagination when I was a child. In character, he was one-dimensional, as I imagine most alligators and crocodiles are. Half a memory from the age of dinosaurs, and half a memory from Disneyland, Ali bore a primal spirit that only imagination could tame. Stuffed animals are our culture’s way of distancing ourselves from the wild through imagination – and it works, but only if you don’t spend your childhood entranced by woods and trees and animals, when the flight and call of a barn owl are cause for elation, and fear of a barking dog makes you cross the street on your way to school. You go home and all the animals behave.

That’s why they call it make-believe.

Children live in imagination, and I remember it as real as reality. I remember it through Ali, who came home with me from the concrete and asphalt jungles around Disneyland. The jungle boat ride at Disneyland was one of my favorite rides – palms and ferns lined a muddy river, and visitors crowded on a boat to glide through a humid tour of bathing elephants and crocodiles, vine-covered ruins and monkeys, stalking tigers and tongue-in-cheek guides. I begged for a vicious rubber snake to take home. Mom and Dad expanded the family instead. 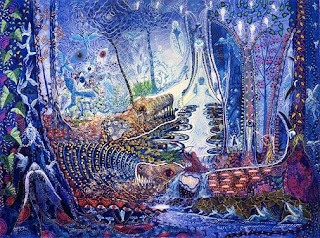 So now I’m about to go to the real jungle, where caimans are hunted to extinction, where forests are cleared instead of tapped, and where vision-vines lure new-age trippers to weeklong retreats. Not exactly the Disneyland ride I remember. But the excitement and anticipation and wonder are still the same, just wiser and more mature. Instead of going with my family, I’ll be going alone, just as I went alone into the fields and woods while growing up. My imagination runs wild.

Ali is probably boxed in my parent’s attic, though his spirit still lives in me, fodder for more imagination and motivation for adventure. Sometimes friends leave and years later you suddenly ache. Blue Donkey’s head eventually fell off, and Amy – the first woman I shared my bed with - stayed behind in a cheap hotel somewhere in the American southwest, in an air-conditioned room with a bed that vibrated if you poured enough quarters and loneliness into it. We all travel alone, I guess. It’s what we bring home that counts.
Posted by Jason E. Weeks at 1:05 PM
Email ThisBlogThis!Share to TwitterShare to FacebookShare to Pinterest
Labels: Peru