Condemned to Drift or Else be Kept From Drifting

I was up early and on the road by 8 am, driving up Highway 504 in rain and clouds and slightly bothered by the fact that the weather wasn’t supposed to clear until the afternoon, and my plan was to hike to Mt. Margaret and back along a high ridge overlooking Mt. St. Helens. The two-hour drive wasn’t worth wasting, though, so I pulled in at Johnson Observatory and asked a ranger for advice. He recommended the hike a hike out on the pumice plain, where the weather forecast called for higher cloud levels and no rain. I’m glad I took his advice – the ridges were cloud-covered the entire day, but out in the plain, in front of the crater, the sky opened up to billowing clouds ripping across the open crater, with acres and acres of wildflowers glowing brilliantly in the sun. 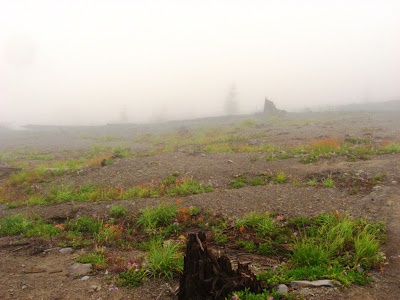 The first two miles along the cloud-covered ridge were ghostly, with a few trees looming out of the fog. More commonly, shattered stumps broke the smooth horizon and tree trunks crossed and recrossed the rocky ground. The last mile curved around along a high, rocky, barren ridge, with steep drops to the plain below. The cliffs on Coldwater Ridge fall precipitously to the valley floor, where a massive pyroclastic flow slammed into the ridge, and with nowhere to go, scoured upwards and over the 500ft ridge-top, leaving bare rock behind.

As the clouds raced through the hilly terrain, I descended the ridge through gullies cut by new streams, and passed through a landscape so destroyed by volcanic cataclysm that almost thirty years later, only a thin layer of soil exists to root flowers and grasses. I quickly dropped below the clouds and made my way down an undulating trail that crossed many types of terrain – wet, brushy stream channels, hard-packed sand-dunes, rocky hillocks, tumbled basalt slopes. Spirit Lake appeared to my left, and though I couldn’t see the mountain, the entire atmosphere of the place seemed menacing. An unseen, active volcano lurked somewhere ahead, and the tortured landscape reflected its power. Everything in front of me was rich forest several decades ago, a playground for hikers and campers. After the eruption, the land itself was changed – the topography consists of various materials cast from the mountain, studded with boulders as large as living rooms, and the rough and redefined slopes were black, brown, and gray, every earth-tone in nature’s box of crayons. Hardly anything grows taller than a hiker. Hardly anything grows taller than a foot. 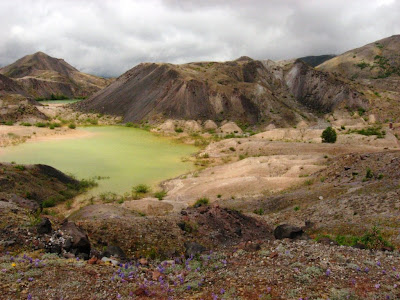 The trail leveled out across the plains, and I passed small ponds with no apparent inlet or water source. From above, it appears they drain into each other, with the eastern-most pond the highest. From here on, I passed multiple signs of scientific study, including a small shack and numerous PVC pipes I’m certain contain rain gauges or monitoring equipment. The trail crosses small streams where flowing water enables grass and reeds and shrubs to grow bright green against the drab landscape, and provide habitat for frogs and insects. 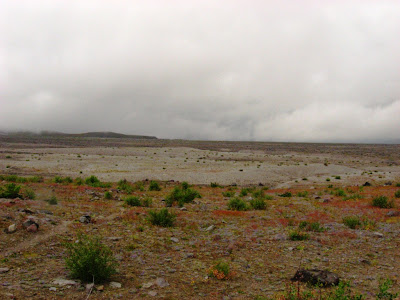 But parts of the pumice plain are so desolate even boots fail to make clear prints. Going off-trail is prohibited, but it happens frequently – sometimes the trail disappears in sand and rock, and only the depressions left by those who came before guided me to the next post marking the general path. Large stretches of open country glowed red with paintbrush, but other flowers were blooming, too, most notably penstemon and miniature lupine. These three species made up the bulk of the wildflowers present, but many other flowers bloomed alongside them, adding spots of yellow, white, and blue to the red and purple meadows. And in some of the stream channels, I found evidence I wasn’t alone. 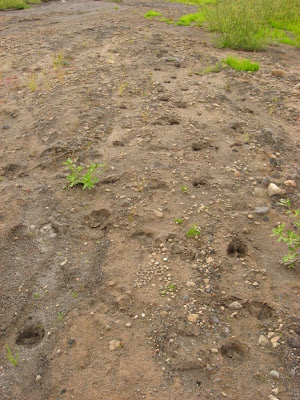 At several points along the trail I marveled at the tenacity of life to come back, and adopting my best nature-show-host voice, I spoke aloud… “But life returns to the blast zone… these small flowers have found a niche in the lee of a giant boulder cast aside by the mountain’s fury…”

I wandered south past Spirit Lake, whose waters flashed in the intermittent sun and whose far arms and shores still hold thousands of logs toppled by the blast, and thrown or carried into the once pristine waters. Something of Bob Dylan echoed in the mood, and it wasn’t until the iPod shuffle on the drive home that I made the connection, minus the lightning:

“Even though a cloud's white curtain in a far-off corner flashed
An' the hypnotic splattered mist was slowly lifting
Electric light still struck like arrows, fired but for the ones
Condemned to drift or else be kept from drifting
Tolling for the searching ones, on their speechless, seeking trail…” 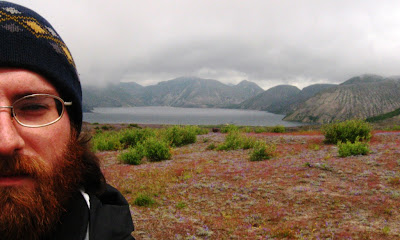 The clouds obscuring the mountain finally cleared, and as the sun poured down on the acres of paintbrush, the breach opened up, showing a jagged rim encircling the lava dome and snowfields and glaciers, and a broken and barren landscape tumbling down from the crater to the plain. I’d never been this close before – my only knowledge of the mountain was the view from Johnson Observatory. Up close - and I mean close - my mind couldn't fathom the scope and volume of the scene, or understand its power, or grasp its meaning. My photographs don’t capture the immensity or proximity of the crater, and they don’t capture the empty plain, or the harsh light competing with clouds, or the absence of any living thing other than short, twisted shrubs and flowers and an occasional hawk hunting unlucky chipmunks. 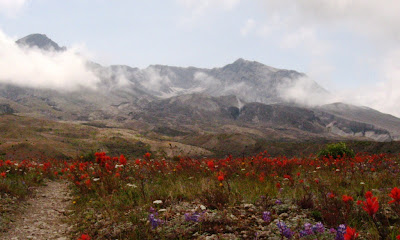 A cold wind blew from the west, up the Toutle River valley still filled with sediment and lahar deposits. I was just over a mile from the Loowit trail and Loowit Falls, whose ribbon of glacier melt I saw shining in the sun as it poured through a gap in the crater and fell towards the dusty, incised plain. Staring into the crater is like staring at a force so unfathomable I can only describe it as holy, and the skin on the back of my neck crawled, and I wasn’t sure if it was from the wind or from the feeling of impermanence and unimportance I suddenly felt.

I suppose I am an amateur and underequipped Buddhist, and a large part of why I hike solo is the testing of myself against the force of myself – the momentum of staying in bed, the mental focus of planning and preparing, the physical effort of hiking and the clarity, awareness, and bliss I arrive at while immersed in nature. Sometimes beauty triggers that arrival, like it did a few weeks ago, surrounded by blooming bear-grass in the ridge-top meadows on Silver Star. Other times it’s the physical exertion and the elements, like rainy-day hikes with no views. Standing out on the pumice plain, in full knowledge of the events that occurred here and so close to Mt. St. Helens’ crater, was a culmination of all those things that bring me to a state of Zen. Zen may be, as some have said, found in the quotidian – but my encounter with the mountain brought me into a place where being was vibrant, awareness was all encompassing, and bliss was simply pure. 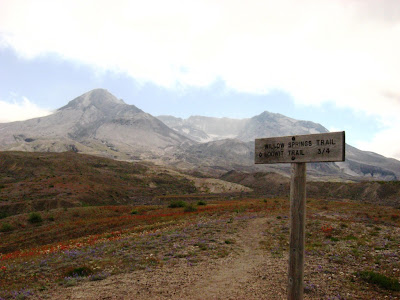 Heights like that are not so easily reached, and life returns with needs and desires.
I ate lunch in the shadow of the mountain, in a rocky stream-bed lined with shrubs and flowers, then made my way back up the ridge to the observatory. Clouds swallowed the mountain again, as though it had never existed, as though the forests and animals that once lived here had never existed, and the land had always been this way, new and fresh and full of potential, holding not just memory but hope, not just healing but opportunity. Just short of the observatory, I passed the ranger who’d recommended the hike. He was guiding a group of teenagers, telling them about the eruption and its effects.

I grinned and told him where I been, and I thanked him for the suggestion, and he looked back at me with sincere interest. I’m sure he saw Mt. St. Helens reflected, expansive, vital and wild. I’m sure he saw renewal.
Posted by Jason E. Weeks at 1:39 AM
Email ThisBlogThis!Share to TwitterShare to FacebookShare to Pinterest
Labels: Hiking