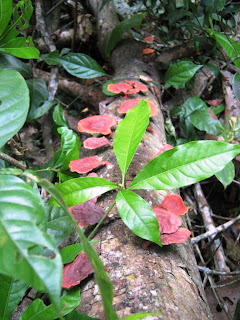 Late the other night I sat outside my apartment and smoked a cigarette after transcribing large parts of my journal onto my computer. The night was cold and leaves rattled in the wind. The courtyard was quiet; none of the neighbors had lights on, and my mind was elsewhere. During these late night smokes I often think about hiking – where to go on my weekend, what the weather will be like, what the trail conditions are in the forests and mountains just east of here. On this particular night, I sat outside and struggled with my memory of different forests. On a day to day basis, I don’t think about . I don’t think about the rainforest. I don’t think about what I saw and did and experienced. It’s not that my memory is bad. It’s that my normal life is active enough to preclude thinking about the jungle, and my immersion into a world so different from this that on my return to “this” world – Oregon, friends and family and coworkers, the reality of bills and rent and all the interests and activities I do to fill my time – on my return, I walked through my neighborhood looking into trees and expecting to see monkeys. Normal life has a way of appearing simultaneously more beautiful and more empty after an experience like . And my journal, out of chronological order and glaringly remiss in many aspects of recording events and feelings and observation, threw me back that night into a place that will forever be vivid and meaningful and remote. There are no monkeys in ’s trees. But there are words to summon them in my memory. If there are continuity problems in my journal entries, so be it. My journal is as jumbled as my reactions were to the Amazon. And I will continue to post excerpts here, in the spirit of telling the truth as true as I remember it. 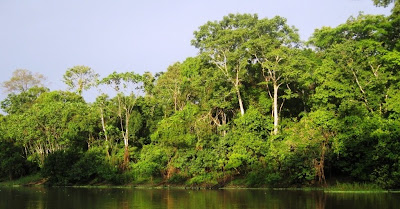 Woke this morning in the jungle. My cheap alarm purchased in woke me early and I sat on a couch in front of the main lodge, and smoked a cigarette while waiting for Hulber. The morning was already warm, and birdsong filled the air. The trees on the opposite bank of the Yanayacu glowed in the sun, and the river flowed lazy and brown past the floating docks where the canoes are tied. 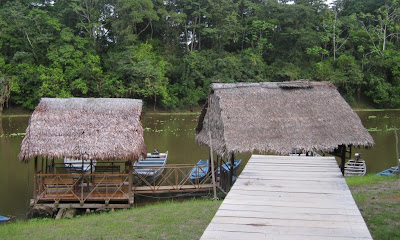 Hulber and I set out looking for wildlife at 6:30am and paddled downstream in a tippy blue canoe. With the river so low, it’s hard to imagine the jungle at flood. Now, in the dry season, the banks are high and muddy and the long roots of trees stand several meters back and above the water. Hanging vines and water-marks on tree trunks show the reach of the flooding, and the amount of land that will be covered in water in just a few months time is incredible. I decided this morning not to waste my time using my camera – the unbalanced canoe and lack of a telephoto lens make wildlife shots impossible: no colorful birds, endangered river dolphins, troops of monkeys, casual sloths, flirty butterflies. I’m going to focus on the experience, not on the camera. 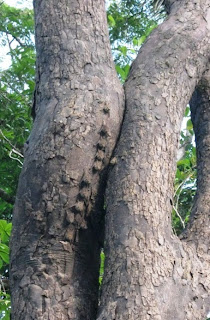 Hulber pointed out kingfishers, black-collared hawks, egrets, cocoi herons, fishing hawks, parakeets, long-nosed bats (Hulber pronounced it low-nosed bats), “Jesus” birds (wattled jacana, with long toes that allow then to walk on plants floating “on the water”), and squirrel monkeys moving in large troops in the morning branches. From the river, the jungle is a wall of green – brown river water covered in hyacinth and lily laps against steep banks tangled with roots supporting thick trees laden with vines and bromeliads. Finding animals is easy. You look for movement, and as you get used to seeing shapes within the dense forest, animals appear. I wear my little binoculars and scan the forest wherever I go.

As we paddled around the Yanayacu, we talked about the jungle, about the trees and plants the natives use for medicinal and material purposes; about the river, five meters deep and rising; about ourselves and the places we come from. Shoulders aching from early morning exertion and a stiff current, I thought of William Stafford on the way upstream – “In the canoe wilderness branches wait for winter; / every leaf concentrates; a drop from the paddle falls” – and Gary Snyder – “Gracias, xiexie, grace” (as I’ve recited so many times when things got tough). 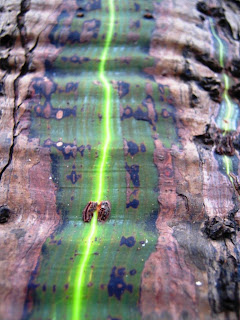 But it isn’t tough here, unless you consider the heat, humidity, and mosquitoes. The temperature is in the high eighties most of the time, if not higher, and it’s so humid that it feels sometimes like I’m swimming in thick, heavily scented air. I sweat constantly and profusely. To prevent insect bites I practically bathe in repellent, which, coupled with the sweat and the requisite pants and long sleeves, means that I’m slimy all day long. The funny thing is – you just ignore it. It’s so humid nothing dries quickly: not socks, not shirts, not pants legs after being tucked into rubber boots. Everyone is equally affected, especially the guests. I can see how some people might suffer miserably. I just take it for what it is. Then I take a cold shower, and that first blast of cold water jolts my heart then spreads like heaven over my skin. Following which, of course, I can’t dry off and I put on clothes damp with perspiration. Oh well. I’m just going to get muddy and bitten, anyway. There are enough joys to make me forget these minor hardships.

The air is full of noise – shifting birdsong, from the chatter of parakeets to the deep, gulping cry of the horned screamer and the impossible to describe and impossible to forget call of the oropendula, which sounds like a drop of water falling through a synthesizer with the reverb set on high. Insects click and buzz and hum, frogs bleat and moan, and the forest cries and calls out constantly, constantly, constantly. I want to come back when the water is high and the wildlife clusters around high points in the flooded Amazon; I want to come back with a tape-recorder and a nice camera and several weeks to look and listen. 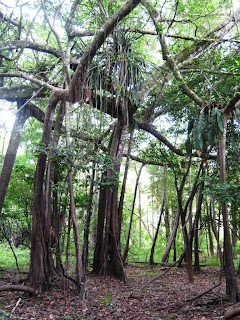 After the canoe trip and breakfast, two guides took four of us downstream (by motorized boat) and we hiked into the jungle to a lake. A path led over a creek, across a primitive bridge made from poles tied horizontally to other poles stuck vertically in the mud. It seemed rickety and unsafe, but it held, and no one fell or slipped into the swampy backwater that contained (or so it was claimed) piranhas. The trail led into a marsh filled with vines and tangled roots and the scent of decomposing leaves. Against a massive tree with wide, buttressed roots, the watermark from last year’s flooding stood another foot above my hand extended above my head. By the time we reached the lake, thick, sticky mud coated my rubber boots and my pant legs were damp with perspiration. The lake was almost entirely covered in floating plants, and one by one, we walked out on floating logs slick with slime and algae to get close to giant water lilies, amazonica, several feet wide and capable of supporting a small child. Two hoatzin perched in a grove of maquira trees on the opposite shore – through binoculars, it was easy to see how strange they are – large birds, almost prehistoric, with extra clawed digits on their wings that disappear as they mature. They barely fly, and one of their main food sources is a plant that contains alkaloids that make their flesh taste like a sewer. Even starving natives avoid hoatzins. 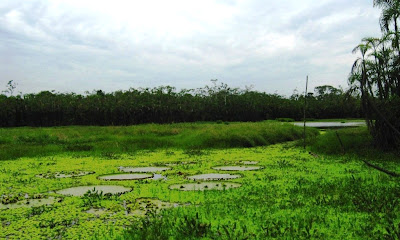 While making our way around the lake, we heard several loud booms, and looked up to see a big woodpecker high in a tree. The drumming was incredible – probably meant for communicating with other woodpeckers. I can’t believe how much I’m becoming interested in birds. I never gave them much thought before – but then, in , there aren’t as many large bird species, and the birds in general are dull in plumage and not as exotic as the toucans, macaws, hoatzin, and all the other birds I’ve been seeing here. 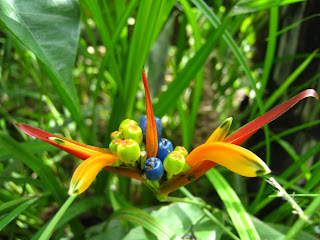 The boat returned us to the lodge and as we rode the river upstream I felt as if I were in a trance, as if a natural rhythm was coursing through my body and mind. The jungle passed by, thick with vines and full of birds. Floating plants bobbed in our wake. We slowed to pass locals fishing from canoes or steering peque-peques with twelve-foot long propeller shafts. Herons and egrets launched into flight as we approached and hawks watched us carefully as we passed. The breeze felt great; butterflies raced alongside the beam; and I removed my boots and leaned back and let the boat carry me further into the Amazon.

Posted by Jason E. Weeks at 12:42 AM
Email ThisBlogThis!Share to TwitterShare to FacebookShare to Pinterest
Labels: Peru, Travel