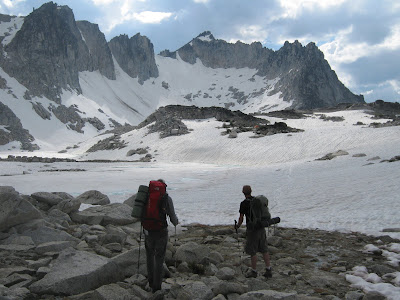 Just after six o’clock at the top of is a half-mile below. To the west, the sun shines rays behind dark clouds above , and to the north, lines of ridges and snowy mountains recede into the distance of the Cascades. The wind blows gently over the pass and despite the snow and an unsettled feeling, it is warm enough for t-shirts and shorts. The lake looks inviting – I wish I were there now – but I remember the words of the wilderness ranger yesterday: “The trail is rocky, sandy, and steep. Go slow. Cross the big snowfield at the bottom, not the top.”

Typical Aasgard – the route drops 2200’ in .9 miles, 5-10° past the typical angle of repose. Most people go up it, and the backpackers Mike, Derek and I encountered in the Enchantments almost universally expressed surprise that we intended to go down. The clouds grew darker, and after several false starts, we found the right trail and passed the first cairn on our descent. 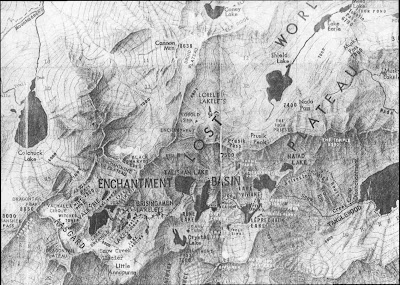 The Enchantments are a series of high alpine lakes tucked in a basin in ’s central Cascades. Surrounded by jagged peaks, the lakes necklace through two granite basins filled with waterfalls, pine, snow, and inquisitive mountain goats. It is epic country, difficult to get to, and harder still to forget. Permits are required, and requests must be submitted in February; only about a third are granted, and not all allow camping in the core zone. We drew permits to camp at , below and to the north of the core zone, and after a five hour drive from , we arrived in the faux-Bavarian town of . All the official campgrounds were full, but we stumbled across a hidden, “locals only” site and spent the night drinking bourbon and beer around a campfire. In retrospect, that might not have been the best idea.

The next day, we organized our packs and set up the shuttle – one truck at the trailhead, one at Colchuck. We’d decided to enter via ; the ascent was longer and gained more elevation, but once in the Enchantments proper, the scenery would get progressively better. From Colchuck, we’d have to climb just as far, and we’d arrive at the best part only to hike down a long haul. 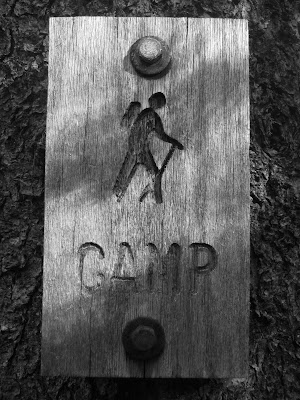 That long haul and the previous night’s partying caught up to us. The gains 4300’ in 6.5 miles. The weather was warm and sunny, and the steepest section of trail, the first few miles, shoots up through a fairly open hillside before entering the valley and thicker forest. Of course, we had heavy, “first day’ packs, and soon broke for snacks to lighten the loads. This was Derek’s first multi-night backpack, and he carried a new pack on broken-in combat boots; Mike also carried a new pack, an Osprey like mine but a smaller model; and I shuffled along with older, battle-tested gear and a few new toys.

The climb was uneventful and tiring, but we made good time and reached and our first look at The Temple at mid-afternoon. was a welcome sight – one little ridge to cross and we’d be at . We sprayed on DEET against the mosquitoes and continued on. The little ridge didn’t feel so little, but suddenly we arrived at the concrete dam between Upper and , and we knew we were almost there.

Like the trout swimming in ’s clear waters, the dam is a remnant from the time before this area became a designated wilderness. Somewhere about 50ft long, give or take, and perhaps 8ft deep on the upper lake with a 10-15ft drop on the lower lake side, the dam allows water to spill over the entire length of its top. The trail crosses the top of the dam. We made jokes about the likelihood of someone falling in, and agreeing that if anyone would, it would be me, I stepped foot on the dam first. 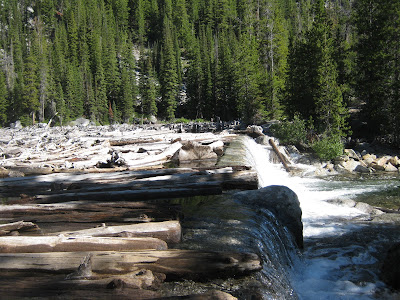 The current wasn’t very strong, and the water was never more than a few inches deep. I shuffled along, using my trekking poles and the logjam in the upper lake for balance. Upon reaching the opposite side, I turned to see Mike and Derek already crossing, and we all made it across with nothing more than damp boots.

A side trail a short distance away led to a small peninsula and a lakeside campsite with a view of and room for three tents. There was an occupied campsite a hundred yards away, and a murky pond that we suspected was responsible for breeding the clouds of mosquitoes buzzing around our ears. We pitched our tents and relaxed for a while before walking down to the dam to draw water for cooking and hot toddies. We watched the sun set and ate our dehydrated meals, smoked cigarettes and swatted at the bugs while the sky turned pink and the hillsides lost definition in deepening darkness. I put on my newest acquisition, a compressible synthetic-down jacket that Mike said made me look like a girl in the woods. Whatever – I was warm under one layer. At last the stars came out, and the moon shone through the trees behind us. We wandered back to the upper lake in time to watch the moon set over a 7250ft un-named summit just east of , then we, too, settled in for the night. 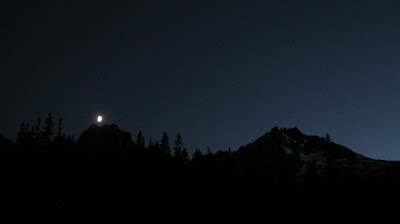 I slept poorly, using my jacket as a pillow and finding every root and rock under my sore limbs. At 7am I got up when I heard Derek moving around. The sun was bright in the cloudless sky; the day would be warm. We made coffee with Starbucks Via and ate oatmeal, and dodged gray jays as they darted around camp, occasionally dive-bombing us. After a while we tried to goad Mike into rising. A muffled voice rose from his tent; he slept badly too, and felt miserable with a sudden cold. The morning went slowly from there as Mike got up, found the outdoor privy, and climbed back in his tent. Derek and I each paid a visit to the wooden box, which didn’t smell bad but was exposed to the forest, and drew mosquitoes and biting flies from all corners of the valley. DEET was as important as TP. 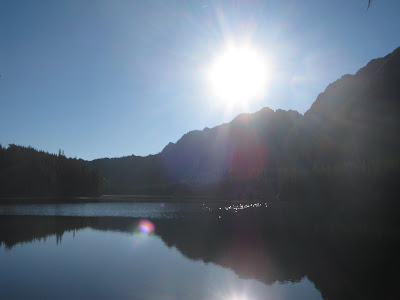 To pass time, Derek went down to the dam and returned with words I’ll never forget: “Did you guys know there’s a dead mountain goat in the logjam?” Mike started to get up immediately and I followed Derek towards the dam. We were intercepted by a ranger – she carried a full pack and a long-handled shovel, and she wore her hair in pig-tails. Knowing she’d want to see our permit, we walked back to camp and she provided us with information about trail conditions. As soon as she left, we returned to the dam and we looked for the goat, shielding our eyes against the sun and scanning the logjam.

“Where is it?” we asked, looking further and further out. “Right there,” said Derek, pointing to a yellowish, bloated carcass jammed between two logs about 15ft from us, near where we’d drawn water the night before. It had obviously been there a while, with logs backed up behind it outside of the main flow and close to the edge of the lake.

I think we all felt a little sick.

Back at camp, we held counsel. The original plan had been to day-hike to , the lowest lake in the Enchantments basin and just 2 miles away and 1360ft up the head of the valley. But the dead goat unnerved us; we weren’t certain our water was safe to drink, although it had been treated. Mike was sick, and the mosquitoes were thick, possibly because we were so close to a brackish pond. Derek and I agreed to hike around the lake to look for a campsite closer to the upper basin, and with fewer mosquitoes. From there, we’d figure out what to do next.

It worked out well. Derek and I found a camp next to a granite shelf that gently sloped into green-blue water, and we moved camp, set up out tents, and prepared to hike to Viviane. I stuffed my ultralight day-pack with gear, Mike and Derek reorganized their backpacks, and we set off in early afternoon with a mission: find a cleaner source of water.