Lake Viviane and the Wilderness Life - The Enchantments, Day 2 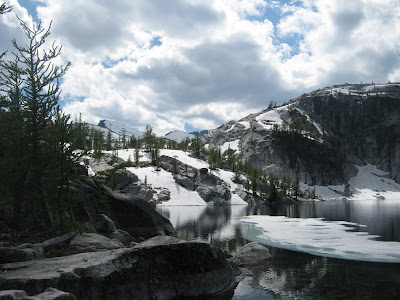 When you hike with water tainted by dead goat, you get thirsty fast. When your fellow hikers have a head cold and sore feet, you have a recipe for big arguments and raging tempers. It was a blessing and a wonder that none of that happened when we set out to day hike in the Enchantments.

Mike and Derek and I followed the trail towards the head of the valley to find a small stream cascading through boulders and underground tunnels, and splashing through pools on the forest floor. We refilled and treated our water, and made our way to the inlet where the stream draining the entire upper basin entered .

The water was aquamarine and deep, clear to the bare granite bottom. Trout swam in the shadows cast by a few drifting logs, feeding on whatever the current carried down from the heights above. A few yards upstream, two logs with sawn crosshatches for traction spanned the wide stream, and the trail began to climb, first through forest and then through alternating stretches of gnarled root, bare granite, and rocky ground. 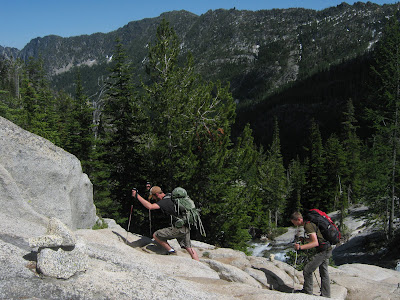 At times, the trail was shaded by trees, and the footing was a mix of earth and root. The higher we climbed, the more rugged the trail became. First came easy granite bedrock, with marking the way to the next section of trail. Then the granite began to build a slope, and the route followed natural fissures and gaps between outcrops. These gave way to staircases and pitches of stone marked with , with some that almost required scrambling. There were other backpackers heading up, and our pace slowed to accommodate them. With Mike’s cold and Derek’s increasingly sore knee – he’d aggravated an old strain – we weren’t in a hurry. After one hard stretch, we took a break at a huge flat boulder overlooking the cascading stream as it fell over a hundred feet in the same amount of yards.

Mike and Derek cooked up ramen while I laid on my back, listening to the water and looking at the sky and jagged ridge across the valley. If we were all healthy, we’d consider the climb fun – but we weren’t, and I was doing my best to contain my excitement while Mike and Derek were admirably biting back complaints.

One of the things I’ve come to appreciate most about backpacking is that it teaches self-reliance, while valuing sharing and teamwork. Each of us carried our own weight – everything we’d need in the wilderness was in our packs, on our backs, and in our hearts and heads. We shared food, insect repellent, water purification, sunscreen. We set up our own tents, cooked our own meals, carried our own loads. Whatever stresses we encountered were our own. Though there were complaints, they were not bitter, and though there were obstacles, we supported each other. This was Derek’s first extended backpacking trip and he asked a lot of questions, learning as he went. All three of us shared our past experiences, enthusiasm, and good humor, teaching as we went.

Wilderness is not something to anthropomorphize. It is not static; it follows its own rhythms. It does not care if you live or die, or how you live or die. Wilderness simply exists, independently of your physical or spiritual attachment to it, and how you interact with wilderness is a reflection of your approach to it, and a measure of what it means to you. When immersed in wilderness, when living in wilderness, you must treat it with respect, because only in that way will you treat yourself with respect. How we dealt with the hardships, the trials, and the changes of plan – all symptoms of what we brought with us – were emblematic of our respect for the wilderness we were in, and for each other.

That’s why it was so damn relaxing to lie back on a slab of granite and soak up the sun, listening to the rush of falling water and the quiet voices of my friends as they prepared a simple meal in the shade of the Enchantments basin. 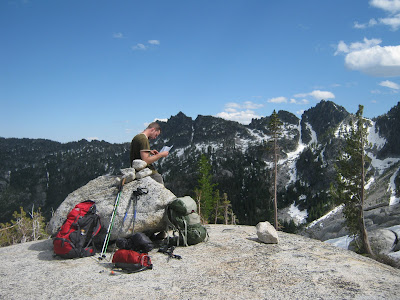 The rest recharged us, and up the trail we went, into a more open country where the views were magnificent and the route more difficult. 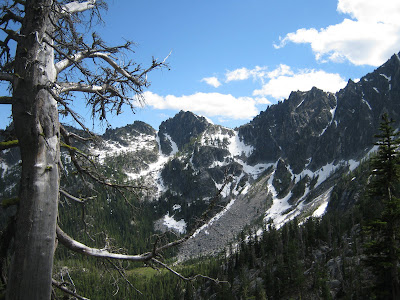 Scattered pines cast crooked shadows over granite bedrock and blooming pink and white heather. The sun shone brightly on the lakes below, and towered to the west, a serrated blade notched by chutes filled with shaded snow and tremendous fields of rockfall. The landscape didn’t lend itself to a trail – in some places, small steps and edges had been cut into the bedrock to help hikers balance. Sheets of granite lay exposed and sloped precipitously down, with nothing to stop a hiker if they fell. Between the granite sheets were stairs of stone at a steep pitch and high enough that it was hard to raise my foot high enough to step up. And then we arrived. 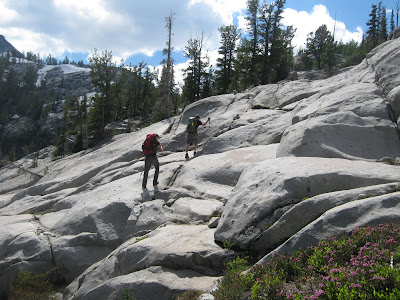 The trail lost elevation, rounded a corner, and opened up to Viviane where the outlet coursed through a granite channel and fell down the mountain side. Viviane was beautiful, with walls of granite holding two sides of the lake and looming above. The western slopes were covered in snow and above them the Enchantments basin rose under ’s ramparts. At 6785ft, the lake still had ice floating in it, but we set our packs down and splashed cold water on our faces, necks, and hands. Backpackers reclined along the shore, included several we recognized from the ascent. 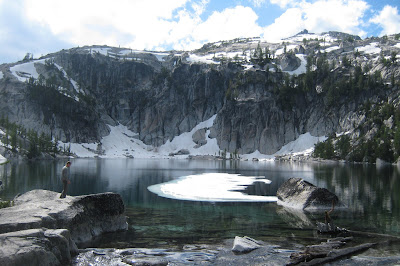 After taking photos and relaxing, Mike and Derek wandered down to an overlook above the valley and . I unloaded my day-pack and refilled my water, and right after I joined Mike and Derek, one of the backpackers by the lake ran down to say that chipmunks were getting into our food. I knew it had to be my fault, and when I ran back I saw that it was. I’d left food out when I pulled out my water bladder. Embarrassed, I packed everything up and decided to test the sketchy log bridge over the outlet stream.

Several small logs had been jammed between the bank and a boulder to make a surprisingly sturdy bridge. The gap between the boulder and the elevated bank opposite was no problem for agile, confident backpackers, but I proved it was possible to cross by hikers with other attributes. The trail wound around a large outcrop and I climbed up to see an elevated view of Viviane and the little shore crowded with backpackers.

When I returned, we watched seven or eight backpackers – two couples and three teenagers – cross the bridge. I’m always envious of kids that get to backpack; I wish I’d been able to go hiking or backpacking more often as a child, but at the same time, I recognize that I might have hated it, subsequently avoided it, and never have the opportunity to experience wilderness again. It worked out okay, but I wish I had those kid’s energy. 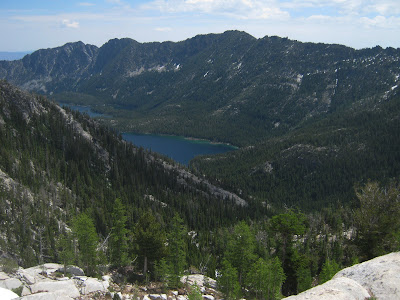 At 4:30pm we hoisted packs and began the descent, which, steep as it was, stressed Derek’s knee even more. Our downhill pace was still quicker than our uphill, and we passed a number of backpackers heading up or resting on the way. One group of guys had hiked all the way from the trailhead, with packs, and they were beat after a 5485ft, almost 9 mile day. They may have been the only hikers on the trail who wanted to reach camp more than we did. 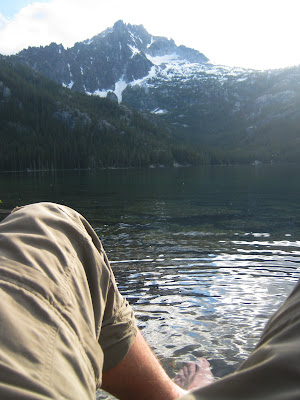 The sun was bright but low over the headwall when we walked in to our own camp. Mike crawled into his tent to rest, and I joined Derek at the lake, soaking sore feet in the clear, cold water and leaning back to watch the sun set over the bottom lip of the Enchantments basin and trout jump in the lake. Those trout could feast all night long, I thought, and not make a dent in the mosquito population. We were just two days in, with two more to go, and our supply of DEET was running low. I thought the mosquitoes at Crater Lake two weeks before had been worse, but these were just as plentiful, and for whatever reason more annoying to Mike and Derek than to me. I’ve never heard more creative swearing than on this trip. 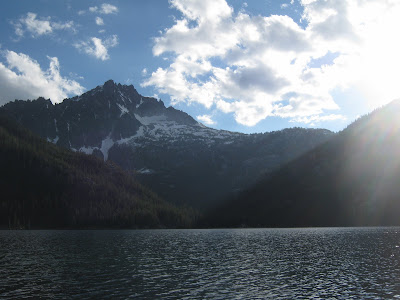 Dinner was once again dehydrated meals – spaghetti and meatballs, in my case – as well as ramen with a dash of DEET and a sprinkling of dirt. Dessert consisted of sitting back with a hand-rolled cigarette and a nalgene bottle half-full of bourbon, watching the stars come out. We discussed plans for the next day, which depended greatly on Mike’s cold and Derek’s knee. We were low on DEET, ibuprofen, and emergenC, and our aqua mira supply was halved when one of the bottles leaked. The day hike to Viviane was frustrating in that we’d have to do it again, and it had tested us already. There were no answers under the stars, but we were in high spirits and not about to suurender – we all wanted to push through the Enchantments, and while we agreed that any one of us could say “I can’t do this” and we’d reverse course, there was little chance that would happen. Still, I had concerns, though I kept them to myself. After the moon set, it was a dark night - but I had friends I trusted and a wilderness to conquer.

Posted by Jason E. Weeks at 12:08 AM
Email ThisBlogThis!Share to TwitterShare to FacebookShare to Pinterest
Labels: Hiking, Outdoors