Going back to May 18th, 9:00 am, sitting in my truck at the equestrian trailhead off in southwest . I smoked a cigarette and watched two birds – an oriole and a yellow warbler – peck for insects on a rain-soaked stump. My windshield was a constellation of water droplets. Ferns softened the forest in front of me, pew-like picnic tables surrounded by pillars of young, straight firs. The gated gravel road serving as the trail led uphill into gloomy, weather-darkened woods. I’d come here to hike Hardy Ridge for the first time, and something held me back.

I conducted a long argument with myself. It was raining. I’ve hiked in the rain before; I even enjoy it, sometimes. The rain would obscure the views from the ridge – but also from any other hike I might do instead. I was tired from lack of sleep and the previous night’s beers, but hangovers had never stopped me at a trailhead before. It was dark and ominous and there was only one other vehicle at the trailhead. Afraid of the gloom, afraid of being alone? No. I wanted solitude, and with the rain, almost any other hike would be equally as gloomy. Afraid of the unknown? No. At one point, every trail I’ve ever hiked was unknown to me. Didn’t feel like hiking abandoned roads for several miles? It’s not ideal, but I’ve done it before.

So what, then? Intuition, a gut feeling, not fear but another force with equal weight. I hike every week, I enjoy challenges, I’m prepared for the weather and to hike a new trail. Should I listen to myself? Should I bail? Why should I bail if I can’t identify the source of my hesitation? Everything I’ve ever read about trusting your instincts in the wild came back to me: stop, don’t panic, listen to yourself, assess conditions, proceed cautiously, know when to turn back, no regrets. But that was always for alpine climbing or other dangerous pursuits – not for hiking thousands of feet up miles of unfamiliar trail in the rain, with a hand-drawn map and having left no itinerary. 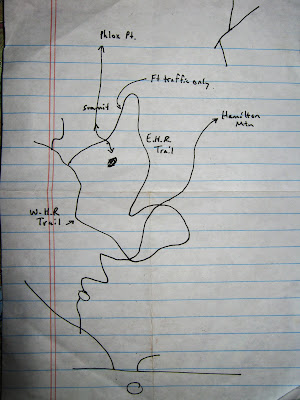 I argued with myself. Do it, a voice whispered, don’t give in. What will people think? You’ve gained a reputation for doing this, don’t let yourself down, don’t let your friends down. What will they think? What do you care what they think? is nice, another voice answered. You can come back later and hike Hardy Ridge in the sunshine. That’s reason enough, isn’t it? No, it’s ridiculous to sit here thinking about this. You’ve never turned around before. Go for it! You’ve been beyond several times this year already. Yes, but I’ve never, ever experienced such an instinctual warning, not a thought or an emotion but a deep, complex knowing. Listen to that, learn from it, gain from it.

I looked back at the stump and the oriole and the warbler were gone. I started the engine and before I knew it I was driving back over the Bridge of the Gods, west towards .

I hiked up Multnomah creek on the Larch Mountain Trail, and crossed over into the Wahkeena drainage. As I descended the steep canyon above , rain began to fall heavily. I put on my shell and looked east towards Hardy Ridge. Clouds swirled across the crest, and a dark mass of rain broke above it before it faded from sight in the downpour.

There wouldn’t have been a view.

Since that day, I’ve told this story to a lot of people. And in telling this story, I’ve found that some people think I should have faced up to the challenge and gone on the Hardy Ridge hike. Most people, however, feel that I did the right thing by following my intuition and leaving. I sensed something wasn’t right and I changed my plans. That, at least, sounds responsible.

Months have passed since that morning I sat in my truck on . My day turned out well – I enjoyed my hike up Multnomah and down Wahkeena – and I returned with a friend to hike Hardy Ridge less than a month later, in much better weather. But I still debate my decision to alter my plans. What could I have learned from going against my instinct? What could I have experienced, and would it be better in some way than the growing familiarity of the trails and landscape around Multnomah and Wahkeena? 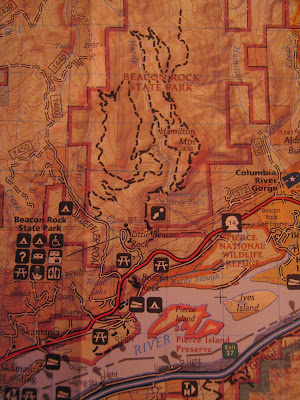 I’ll never know. There’s enough mystery in the woods, and in life. That mystery will never run out. I learned something just from having the debate, and I came up against something else to work through – a question about spontaneity, about trust in my experience and senses, about accepting the situation as it is, and not as I think it should be.

In the end, hiking alone is about control, about learning when to surrender that control, and the responsibilities attendant to each. I choose the hike, I get up and drive to the trailhead, and I hike. I could as easily go to a gym and climb a stair-master. The difference is in what I open myself to while hiking. And in that 20 minute conversation with myself at the Hardy Ridge trailhead, I learned that control and surrender aren’t mutually exclusive properties.

I guess I’m thinking about this because the weather here has been lousy the last few weeks, and I haven’t been hiking. Instead, I’ve been reading about the land and how to approach it. Barry Lopez’ Arctic Dreams has been provocative in illuminating the qualities the land has to stir the heart and move the spirit, and reveal something of our humanity: “To have no elevated conversation with the land, no sense of reciprocity with it, to rein it in or to disparage conditions not to our liking, shows a certain lack of courage, too strong a preference for human devising.”

I would like to think I am open to wisdom from any landscape, be it deeply forested and shrouded with rain, or cloaked in confusion and the spacious territory of the interior.

Posted by Jason E. Weeks at 1:52 AM
Email ThisBlogThis!Share to TwitterShare to FacebookShare to Pinterest
Labels: Hiking, Outdoors