Somewhere near the summit of , I realized that I was pushing myself too hard. Not because this was my first hike of the year, and my conditioning isn’t great. And not because of the steep trail, still crossed by multitudes of trees that fell in the ice storm last winter. Instead, it was a realization that I wasn’t really there. 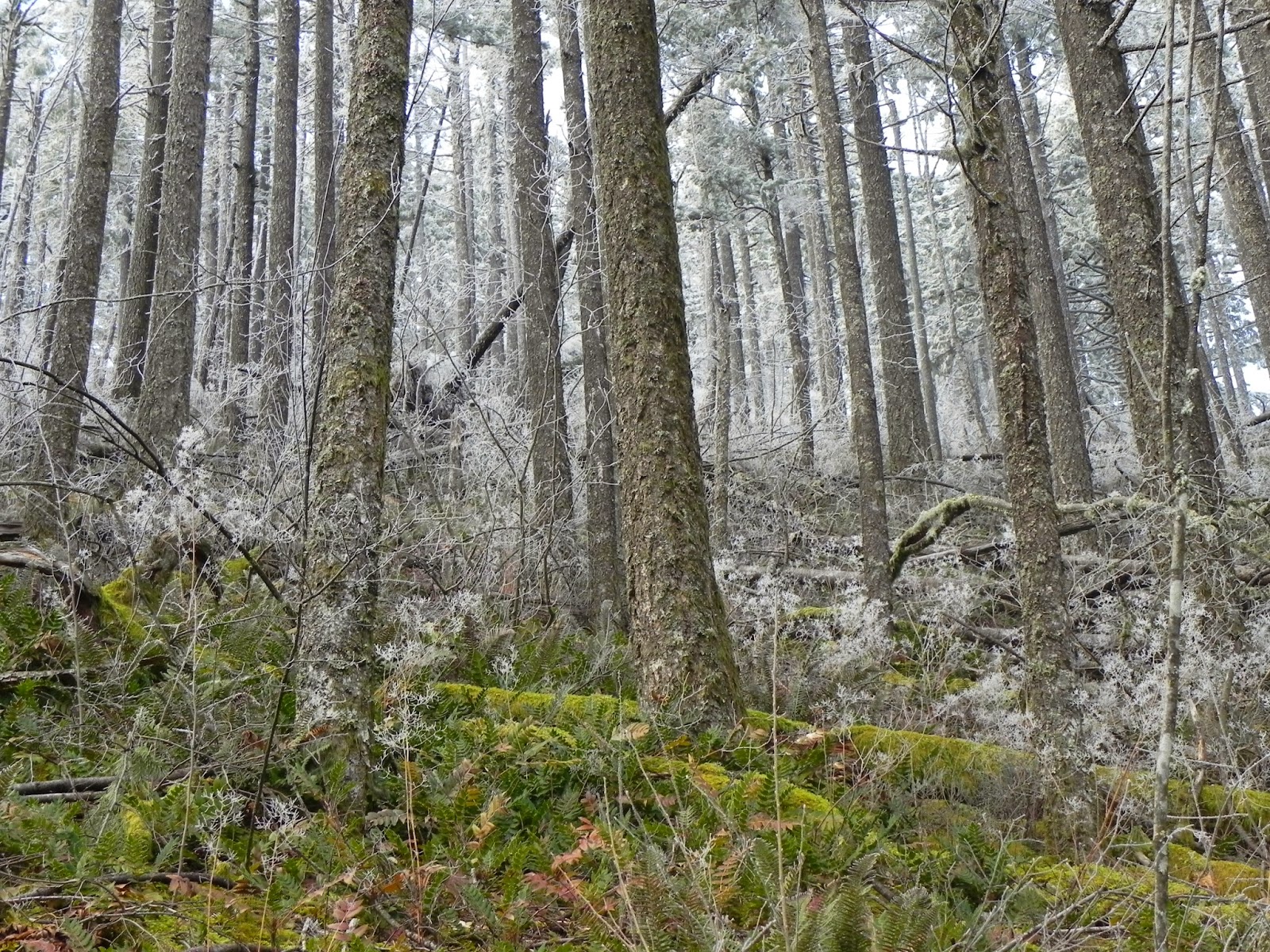 The first, uphill part of the hike focused my attention on my breathing and the lactic acid in my quads. After the switchback halfway to the summit, frost became visible on the trees, then on the understory, and finally on the trail and talus. I slowed to take photos and enjoy the sun and blue sky and white rime.


I kept climbing, and soon passed into the protected, quiet forest just below the summit and talus slopes. The forest was decked out with ice and a soft glow. I followed the trail to the western viewpoint, ducked under some tree branches, and found my way out to a very un-January-like view of the Columbia River Gorge. Here in the sun, out of the eastern wind, it was warm, although flakes of rime fluttered down from the trees. But there was almost no snow to be seen, just a little visible on the summit of , and in the gap between clouds to the north, where was a white snow-peak in a band of sky. The view stretched down-river west past Beacon Rock, just visible in a narrow haze below the floating outline of . The side of the gorge was silhouetted by the sun, a deep blue wash with a thin layer of cloud breaking over Shellrock Mountain Two thousand feet below, the highway ran past lumber yards and green fields and small communities of houses and road-side businesses. 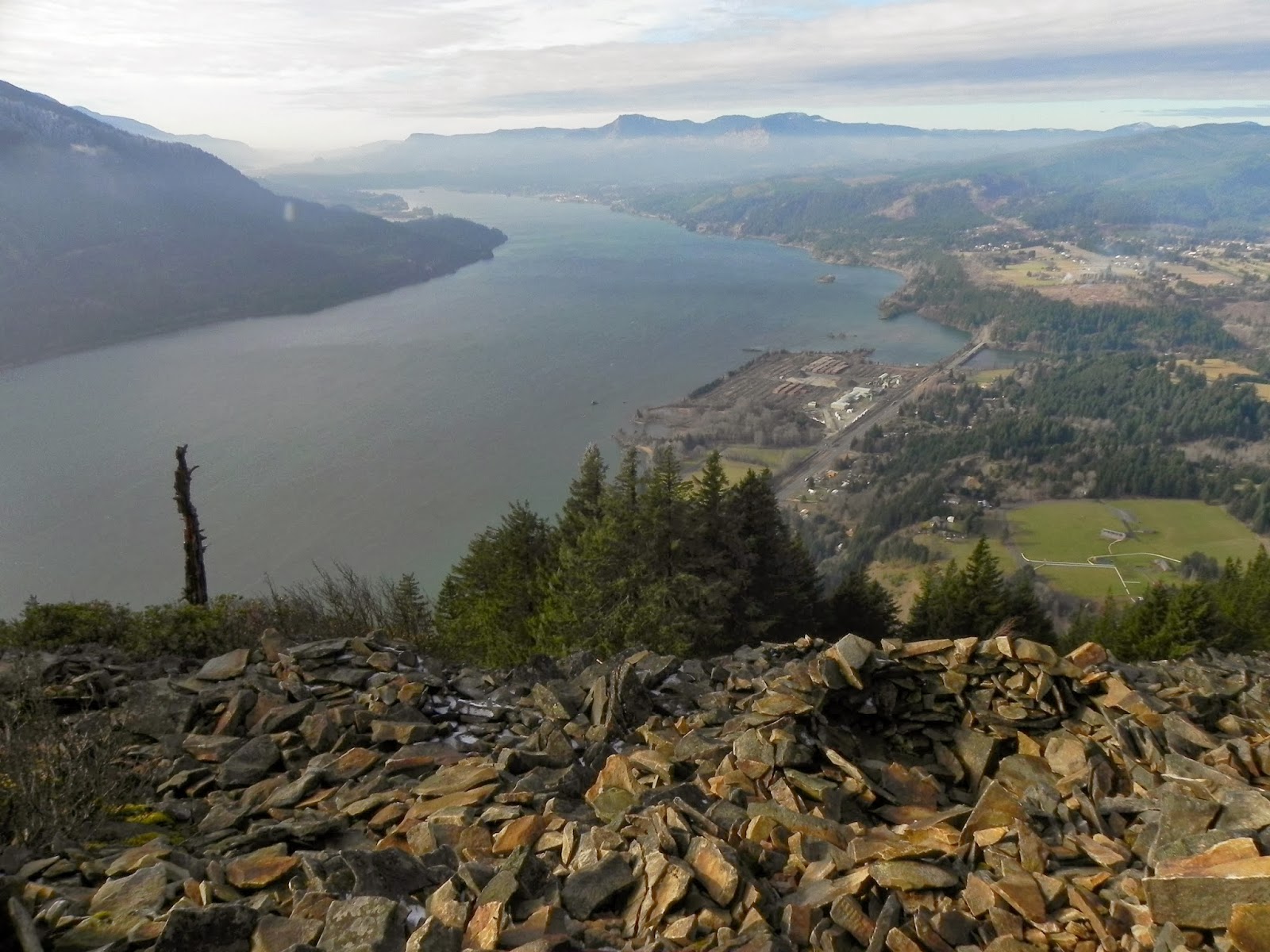 I explored a small ridge on the south side of the summit before heading back up and to the eastern viewpoint, at the top of a large rocky slope filled with native vision pits. On this side of , the wind was fierce and cold, and I gladly put on the gloves my brother gave me at Christmas – the tips of the thumbs and pointer fingers fold back and secure with magnets, which allowed me to take photos and spend a lot of time in comfort despite the elements. Ice coated the summit trees and shrubs, and grew in feathery patterns on the rock. , snowless, filled the view, and a thin sliver of the river was visible between Dog’s base and the featureless shore of the gorge. The sky was filled with thin bright cloud, and the almost total lack of anything man-made – aside from the vision pits – finally succeeded in breaking my feeling of being elsewhere.


My plan was to hike up , then drive east to to inspect a shrine some friends had built on a trail-less ridge overlooking the river. I’d hurried up , taking photos and viewpoints in a rush, with my mind occupied by the physical demands of the year’s first hike and the need to get to the next hike with enough time before the winter sunset. is small enough that a few other hikers can crowd the summit quite easily, and I knew my time at the summit alone was limited and precious. In short, I’d forgotten to be in the moment. 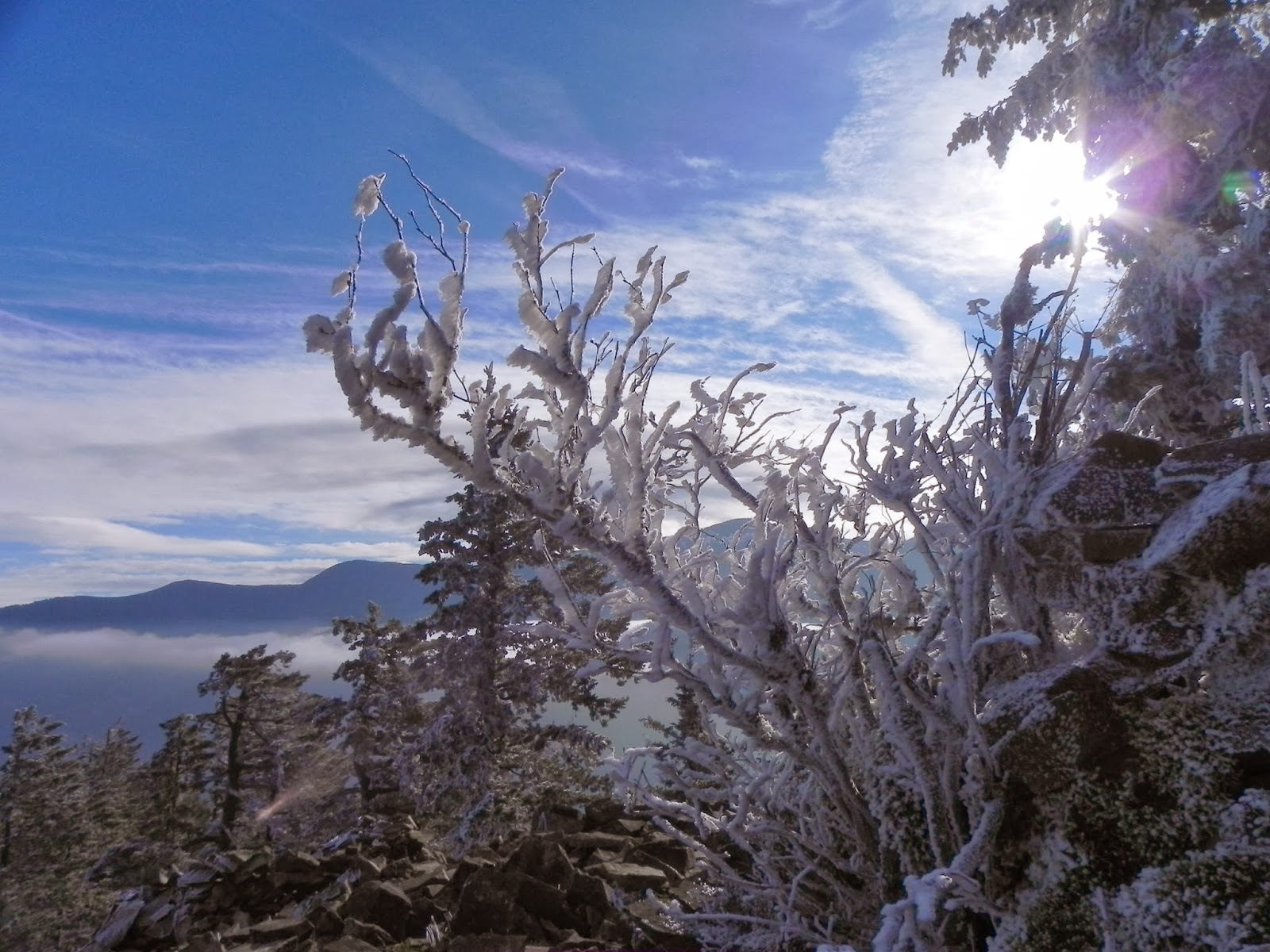 Looking east, into the cold wind, at the summit of one mountain and surrounded by more, I finally shed the distractions I’d carried with me since leaving . I was suddenly present, in a subtle yet powerful shift of perception, the embodiment of Keats’ negative capability – “when a man is capable of being in uncertainties, mysteries, doubts, without any irritable reaching after fact and reason” – and I held all those opposing thoughts to hurry up and to slow down in my mind without apparent contradiction. Shit, I thought, I’m on top of the mountain. Keep climbing.


I poked around for a while, enjoying the expansive view and sun solitude until I heard voices, and I stepped out of the frozen wonderland and headed back down the trail, nodding to some hikers who were enjoying the balmier view west. In my lightened mood it didn’t take long to reach the trailhead, and I made it to with plenty of time to spare. The shrine and the nearby prayer flags were intact and keeping the peace among the moss and basalt, and I enjoyed the change of pace by stretching out on the thick winter grass with a beer in hand, watching raptors circle overhead in the overcast sky as if I wasn’t really there.
Posted by Jason E. Weeks at 5:39 PM
Email ThisBlogThis!Share to TwitterShare to FacebookShare to Pinterest
Labels: Hiking, Outdoors, Photography, Trip Report