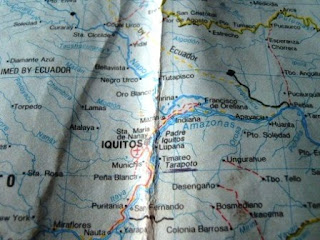 I don’t know what to expect, so I have no idea what the hell I’m getting into. The jungle… I don’t even know what that represents in my mind. Parts of this trip have been so completely different from what I thought they would be that I’ve almost given up expecting anything. Whatever happens, happens, and whatever comes my way, comes my way. And that’s a great place to be in - I can worry about money, or disease, or pickpockets, but I won’t die, and whatever adventure I have will surely be worth living.

From above, the jungle, the selva, the green hell, a blue-green expanse, completely flat. But on the ground, it’s probably impenetrable, except by river, or native path. And maybe that’s my fascination with it – a truly wild place, where there are no paths, no directions, no choices, just inwards, inwards, inwards, always inwards except where the slow and winding rivers run out.

15 minutes before I land. A massive river appears, serpentine with huge channels and oxbow lakes, while cumulus glows orange and purple over the green jungle.

I think Iquitos is hell.

I’ve never seen anything so… different… in my life.

Arrived to a blood-red sun on the horizon, 90F, and humid as hell. Sweating immediately, got my bag, met my driver, and from there…

There is no law here but there must be something in control. There is certainly no law on the roads, and no environmental law, and no building codes, and the gap between those who work and those in power is immense. The road from the airport to my hotel is 30 minutes long - 30 minutes in which I thought at any instant someone would die in front of me. Motorcars – motorcycles fashioned into rickshaws – crowd the one-lane road – though the road is 50ft wide and shared without regard to safety or lanes by decrepit buses, scooters, motorcycles, and exhaust fumes so thick it looks like fog. Lane changes, horns, families of three on one motorcycle, no helmets, no seatbelts, and all of it taking place in a current as thick and lazy as the Amazon, through a third-world landscape dominated by buildings that long ago should have been abandoned and torn down but now house businesses selling groceries and household goods, building materials, motorcar garages, food stalls. I saw tipped over motorcars and makeshift mechanics up to the elbows in grease. I saw dark eating places so unsanitary and dirty that I’d be afraid of the bottled water – but illuminated by huge flat-screen televisions. I saw crowds of people doing… something – anything, just walking, existing among the old peeling ads painted on failing cinderblock walls and shuttered store-fronts and piles of rotting trash and construction lying idle in the street. I was terrified, full of beauty and enlightened.

This is so far removed from my sphere of reality that I think I must be in heaven or hell. I don’t know which. I’m drenched in sweat, I am full in belly in a strange, hot room. I have a fridge full of local beer, and dogs bark while I smoke a cigarette and pack for the jungle lodge. I have just met one of the most original people I can imagine – I couldn’t have imagined – he is what Hunter S. Thompson had in mind when he spoke of “one of God’s own prototypes. Some kind of high powered mutant never even considered for mass production. Too weird to live, and too rare to die.”

I don’t know if you can smoke in here but I’m doing it and you can kiss my ass because that’s the way things seem to work around here. 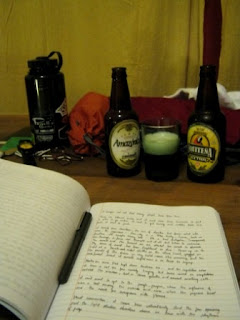 This isn’t a room – it’s four, and it isn’t what was advertised. My driver pulled over in front of a walled compound with a large wooden door. We buzzed in, and were met at the end of a garden by an old man – weathered, tanned, leathery, firm of grip, bright eyed and bushy browed – Walter Saxer, the owner, a holdover from some more free time and place, captain of La Casa Fitzcarraldo.

He said there was a booking issue and he showed me my new room: a bed, and old fan, two lamps on speakers doubling as nightstands, a huge desk with a TV on top of it; a second room, empty except for a mini-fridge, some bookshelves (mysteries, travel guides, “Blood Meridian” – fitting), a door leading to the garden, and a hideous painting of an indigenous woman carrying baskets; a third room, down a few stairs, a utility closet than anything else; and a bathroom, with a bare fluorescent bulb, a mean spider spinning a web, and a shower stall I hope has been cleaned within the last year.

I said I was hungry, asked about the restaurant, and Walter said it was closed. But he made me food anyway, prepared it himself - fried plantains, a slab of smoked pork with spices and strange sauces, a salad of tomatoes, cucumbers, cabbage, and carrot. Simple, pure, amazingly good. Walter bought it to me at an outdoor bar, poured me a local beer (Amazonica, a lager), and we talked while I ate and a dog named Barko (?) lounged in the sweltering heat, and a trio of kittens crawled around the cupboards and countertops near the sink. 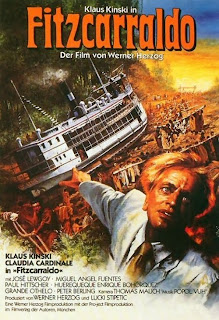 Walter – this place revolves around Walter, and it should revolve around Walter, since he seems to be legend incarnate. This was the house that Herzog used in his film; this is the legendary home of Fitzcarraldo. It has lost some of its charm. It still has a pool, a thick garden, ocelots in a cage, a tree-house, hammocks. And it still has Walter – film producer, conspiracy theorist, communist, old hippie, hotel proprietor, chef, conversationalist, renaissance-man of the jungle. We talked into the thick night about Peru, about economics and politics, about power and greed and democracy, about the lives of people in Iquitos and change and corruption in the US, about transportation and energy and prison and marijuana. He fetched another Amazonica, and eventually I came back to my room to wonder what the hell I’ve gotten myself into.

I’m beginning to think Iquitos might be heaven. The purest form of democracy. A kind of anything goes but we all want a leader without bullshit because we want a leader who is us – and who likes to party.

I’m in my boxers and the sweat is dripping off of me and I want out and I want in, and I am here and it is all I have – pure experience, here and now. I would miss the world I know but it is so far removed it might as well not exist. I wouldn’t want S. here – maybe Brass, he could do this – but this is almost too much for me. It’s too hot and humid to do anything – should I shower? Is it worth it now? Will it make a difference? I can’t pack, I can’t start, I don’t know where to begin.
Posted by Jason E. Weeks at 5:37 PM
Email ThisBlogThis!Share to TwitterShare to FacebookShare to Pinterest
Labels: Peru, Travel