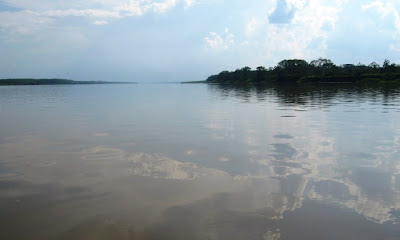 September 7th, 2009
Now just past 10; will breakfast at 8; don’t know how I will sleep in this heat. Unbelievable, unless you’ve been here.

I imagine not all that many people have been here.

I haven’t been downtown, the core of Iquitos, but from what I’ve seen – passing the Plaza de Armas on my way to the hotel – this city is like Mos Eisley. Lucas, look no further. It weighs heavy like – like a bad metaphor. Transparent, see-through, a farce not at all thought out but carried to extremes. The smell and the humid air are almost too much to stomach. My sense of smell has been heightened in Peru – threw up outside a bomb-sight shitter on the Inca Trail, gagged on the smell of my hotel room sink drain this morning, and the sick/sweet scent I smell right now is as thick as syrup.

[The scent turned out to be a fragrant wood, cut and processed at the neighboring plywood factory]

Makes me miss that high clean Andean air… and the repetitive noise I hear is not the fan vainly trying but some insect or amphibian outside the window, lost in some ancient genetic mating call.

I can’t wait to get to the jungle proper, where the influence of man is lost among the orchids and vines, where the jaguars hunt and the roads are overgrown with flowers.

Must remember: I came here voluntarily. And the fan past the light strobes shadow down in time with the rhythm of frogs.

Now packed, last beer from the fridge is open for business. Karma be damned, I killed a large ant on the floor. All I have to do now is sleep, rise, and head out to the lodge. I have no idea what that will be like – who will be there, what kind of people they might be, how the excursions will be run, and so on. Doesn’t look like I’ll be able to communicate with the outside world for a few days. Maybe not until I get home.

Midnight. Too hot to sleep – don’t want skin touching anything. Nothing on TV and nothing I haven’t already read. Will try to rest. Missing S… 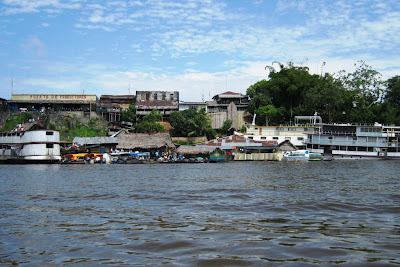 I left Iquitos in the morning, and I was not impressed. It looks odd, thrown together, with little infrastructure and that which exists is unmaintained. In the Plaza de Armas, there's a multi-story hotel, half-finished and abandoned for decades, and the Iron House, made by Gustav Eiffel during the rubber boom years and then left to fall apart until recent reconstruction. The people see to be either unconcerned with how the city functions, or they’re too focused on the tourists to care. I was approached, aggressively, twice by the same cigarette vendor. No, I don’t want your cigarettes, so go the hell away already. I’m sure I’m not giving Iquitos a fair shake – but I’ve been warned often about pickpockets and I’ve seen enough to plant a strong impression.

A van from Muyuna Lodge picked up early in the morning and took me to their tour office, where I paid my bill and waited with two other guests for the speedboat’s departure. Above the lodge office is Mad Mick’s Trading Post, a jungle supply store and dorm run by a gregarious Aussie. I rented rubber boots and then had a cup of coffee across the street at The Yellow Rose of Texas, a tourist bar with enough “Texas” décor to fill any twelve bars in Austin. The waitresses wear cowboy outfits and the waiters wear orange “Hook ‘em!” shirts.
The dock was a riverbank reached by concrete steps. When we arrived, a crowd of children selling cold drinks stood at the door of the van, waving bottles in our faces. The entire experience was strange and for some reason my guard was up – maybe because other people were handling my bag, and handling it casually. Children tried to help carry it – of course, they expect a tip – and I didn’t allow it. If I can do it myself, I will... 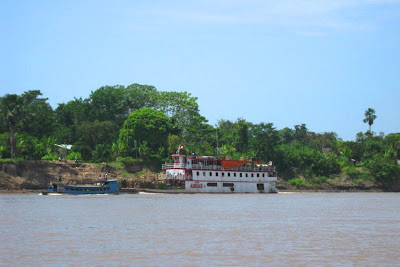 From Iquitos, it was a 2½ hour journey in a cramped speedboat to the lodge. The heat and humidity were lessened by the breeze, but the sun burned down on my exposed left arm. Along the way, we picked up and dropped off several people. Little docks and communities of houses on stilts line the Amazon – a very wide river, with steep banks on one side and wide, sloped beaches on the opposite shore, and lots of river traffic – old riverboats, speedboats, canoes, motorized canoes called peque-peques for the sound the engine makes, and butterflies in the middle, a kilometer from either shore. Rafts of trees torn from the banks float slowly downstream, half-submerged navigational hazards. The water runs brown, gray, blue, green, depending on tributaries and the effects of the sun, and it’s a strange sensation to drift off to sleep to the roar of the engine, and wake to find yourself further up the Amazon, and to dip your hand into the river and scrub your arms and face with river water that has traveled a thousand miles already. 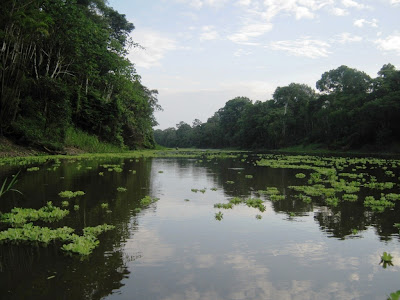 After a few hours, we reached the Yanayacu River, narrow where it joins the Amazon and a rich, coffee-and-cream color. But the Yanayacu - Quechua for "black water" - slows and widens, with reeds and overhanging trees, and half the dark water filled with hyacinth and lily. Mercifully cleaner than the Amazon – Iquitos harbor is a depressing cesspool filled with trash and sewage, and the rusting hulls of forlorn ships – the Yanayacu is a cool, shaded, and peaceful river with high muddy banks and deep forest along its length. Half an hour later, we docked at Muyuna Lodge, set on stilts some distance back from the river and approached by a long wooden walkway with a thatched roof. We were handed cold juice and led into communal dining area, where I met Hulber, my guide for the next five days, and had a welcome cigarette in the rainforest heat.
Posted by Jason E. Weeks at 12:18 AM
Email ThisBlogThis!Share to TwitterShare to FacebookShare to Pinterest
Labels: Peru, Travel