Hulber is in a hammock, reading an English-language anthology of science writing. When I walk over he asks if I have any questions about from the day’s activities. I do, of course, and I grab a beer and sit down on a deck chair while he sways slowly in the evening heat. I opened my journal and set the beer glass on the arm of the chair. A puddle of water quickly formed beneath it. 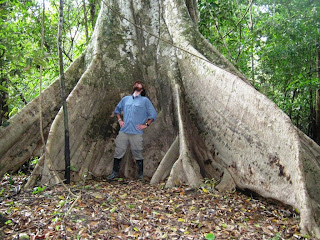 We talk about the species we’d seen: three-toed sloths, hanging from the upper limbs of acacia trees; crimson crested woodpeckers making huge booming noises in the canopy; porcupine palms at the edge of a lake covered in hyacinth and floating plants and Victoria amazonica, massive water lilies 3m across; dark maquira trees with massive, buttressed roots. We talk about nature – he asks about the forests in Oregon and I draw him a map of the state explaining different climate regions, and we discuss soil depth in Oregon and wineries and how annual flooding in the rainforest leaches the nutrients from the thin soil and contributes to falling trees; we talk about logging and language, about provincialism and the difference between Lima and Iquitos and the nearby village of San Juan; we talk about conservation and teaching, ecology and tribes, about books and sense of place.

Inside someone lights the kerosene lamps and we slap at mosquitoes in the gathering dark. I light another cigarette as the jungle comes alive with the noises of insects. Hulber absently scratches a huge welt from an insect bite above his knee and motions to a nearby palm. “Hey Jason,” he says. “Look at that huge tarantula.”

A spider the size of my outstretched hand moves slowly down the bark.

Can’t get too comfortable here.

Hulber Rioja is a university-trained naturalist and freelance guide in Iquitos. He speaks English very well; Spanish, too, of course, and several local tribal languages. As the only primarily English-speaking guest at Muyuna, I got to know Hulber very well over the next 5 days. Conscripted into the Peruvian army, he fought in a war with Ecuador, and afterwards earned a degree in biology. He was born in the jungle – he’s a member of the Yagu, a tribe of former headhunters, and his family lives a long day and a half boat-ride from Iquitos, far up the Napo river. His curiosity and his humor are infectious; one minute he’s pointing out a toucan high in a tree along the river, and the next minute he’s joking with a native fisherman passing downstream in a canoe. 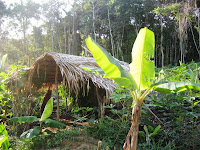 The afternoon I arrived at Muyuna, several guests and I hiked into the high jungle in search of poisonous tree frogs. High jungle doesn’t flood in the rainy season and provides the ideal habitat for the frogs. We went downstream on the Amazon for an hour before landing at a homestead at a steep, muddy bank, with mud several feet deep. The rubber boots Mick rented me are possibly the best investment ever. The landowner (actual owner? Property rights – ask Hulber) led us down a path to his house, built on stilts and thatched with palm. He and his family live in the house, which consists of one “room” sectioned off by fabric screens and a few exterior walls. His wife sat with several children who watched us below, while chickens, dogs, and a small pig roamed loose between the stilts. I didn’t take photographs out of respect – somehow their lack of privacy made me feel intrusive, even though we were tipping the man for his guidance into the jungle. 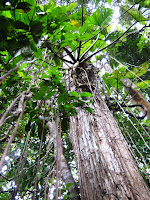 We looped through the jungle on an hour hike – no luck on the frogs, but we did have a great ethnobotany lesson. Thick vines that prodigiously drip water when cut (Urticaria tomentosa: tastes like wet wood, used for hundreds of years as an herbal remedy); trees with wood that tastes like chicken, but with a use I can’t recall; fields of cleared slash and burn. Back at the house, we ate the flesh of a cashew fruit – very soft, slimy, leaves a strange dry sensation on your tongue – then returned to the motorboat as the sun fell on the wide Amazon.

We spotted the pink and gray river dolphins just before entering the Yanayacu River. The young native teenager cut the motor and we drifted as Hulber whistled to attract the dolphins closer. A slice of rainbow appeared in the billowing cumulonimbus on the horizon, and the acacias on the riverbank turned golden as the sun set. 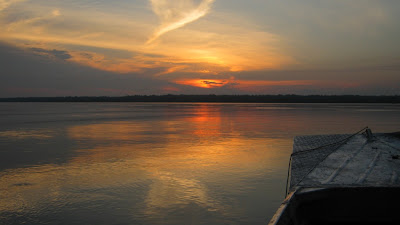 The dolphins were all around us, arcing from the glassy water and disappearing before I could get a photograph. I soon gave up and removed my rubber boots, let the wind blow across the water and watched the dolphins surface and dive all around me. I let my eyes scan over the water towards the far shores, and I relaxed into the evening as dolphins broke the surface, pink sides strange and alien and out of place, somehow, and and sharp dorsal fins describing a curve above the river that disappeared almost as soon as it was drawn on the heavy air. It was incredibly relaxing, and it took a long time before the clever reality of everything washed over me - this isn't normal activity. Twenty minutes later, the sun dropped below the horizon, the dolphins swam away, and we motored slowly into the Yanayacu.

Bats swooped overhead, hunting insects, and Hulber attached a searchlight to a battery at the bow to guide the boat and to search for caimans, frogs, birds, anything he could find in the darkness. Soon, he waved us in to shore and suddenly plucked a small green kingfisher from an overhanging tree. It was motionless in the bright lights, and Hulber set it back in the tree after we all had a chance to look at it. That was pretty wild. What came next… 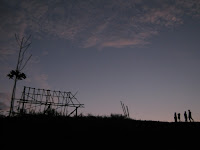 The stars came out – unfamiliar constellations and the milky way blazed overhead, while lightning flashed behind us and in front, to the left. Lightning bugs flashed like stars against the dark horizon, and we cut the motor and the searchlight and drifted down the river, listening to the orchestra of the jungle, watching the lightning and the lightning bugs and the tracers of insects below the cathedral sky. I’ve never experienced the stars like that, the weather, the joyful volume of the forest, the intensity of sense when all is dark and the breeze is the only sensation on your skin, and the ancient stars and the dance of storms and wildlife the only things you see, and the rhythmic pulsing of the jungle the only thing you hear. I smiled in the darkness, overwhelmed.

Posted by Jason E. Weeks at 1:12 AM
Email ThisBlogThis!Share to TwitterShare to FacebookShare to Pinterest
Labels: Peru, Travel