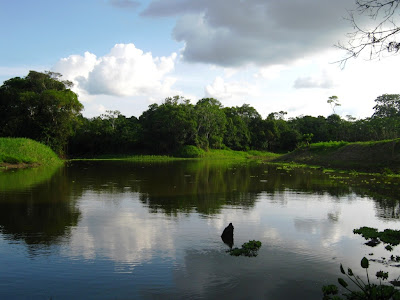 Back at the lodge – Adam, Anna, and Laila left this morning, while two guests arrived. I spent the last hour in the shower, wonderfully cold, then the hammock, listening to birds and watching the varieties of butterflies – white, yellow, ocher, black, iridescent green, incandescent blue and scarlet. They amble like the people do – purposeful, yet unhurried. The pace is slow, languid like the river, and when things happen they happen slowly, like the distant sound of an approaching boat growing louder and louder until it slips past, laden with palm fronds and the men sprawled on top, smoking cigarettes.

The buildings and the walkways between them are covered in thatch and stand on stilts for the high water season. The walls and ceilings are largely open and covered in blue mosquito netting, and at night kerosene lamps and torches light the rooms and the grounds. I have a private bungalow with a shower and sink, a deck with a hammock, and a queen-sized bed. The water is cold, and the nights are so warm I sleep on top of the covers in my boxers – not before checking the room for spiders, of course. Birds nest in the trees and palms – a noisy flock of yellow-rumped cacique inhabit a nearby palm and occasionally burst from their hanging nests in a shower of bright sparks – and natives pass by in small canoes powered by muscle and sinew or the occasional outboard. Considering most supplies come from by boat, the food is excellent – fresh fish is plentiful, as are chicken and eggs, fruits and vegetables, coffee and tea and beer. The owner is Peruvian, and the lodge staff are Amazon natives, friendly and laid back, and their laughter as they go about their work echoes around the compound. 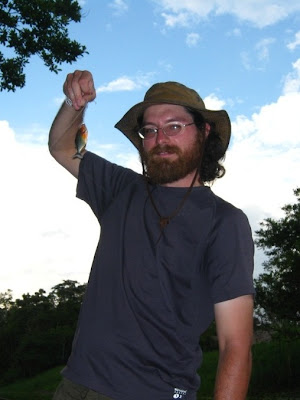 Rode upstream past village, and moored under a tree leaning far out over the water, with long roots hanging down from branches slung with vines, and bromeliads growing from the nooks where branch and trunk meet. A three-toed sloth hung under an upper branch and for a while moved faster than the fishing. Our poles were wooden sticks about eight feet long, with an equal length of fishing line and a barbed hook tied to the end. Fishing for red-bellied piranhas is easy. Attach raw meat to the hook. Splash the water with the tip of the pole to simulate prey in distress and attract the piranha. Drop the bait, set the hook at the bite. It doesn’t take long. Maybe I should’ve said simple, because I didn’t find it particularly easy. These piranhas are small, just a few inches long, but they bite fast, and hard. I hooked a number before landing one. Hulber removed the hook from the first and our pilot (a young native from ) promptly cut it up to use as bait in a deft display of karma. I caught another and insisted on removing the hook myself – the piranha was small enough to grasp in my left hand while I carefully pulled the hook from its jaws, a wide mouth that resembles an oversized pair of industrial nail clippers lined with serrated teeth and a swift, almost mechanical bite.

The ease of catching piranha makes me think that the rivers are filled with them. I knew to expect it, but the sight of villagers bathing or swimming or washing clothes in a dark river filled with piranha is still strange. Life in the jungle depends on the river – it is the primary means of transportation and of communication, acts as a primary food source, and informs and structures every activity in village life. Villages lie on high ground along the banks, organized in a row of raised buildings, with paths leading to the shore where canoes and peque-peques are tied up or beached in the thick mud. 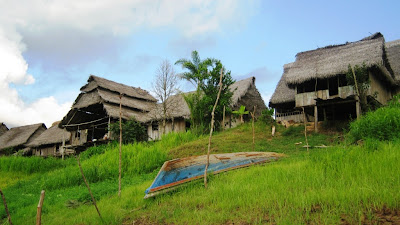 The villages are usually no more than a building deep, stretched along the bank; fields and a soccer pitch or a few common buildings might add a little depth. In Ayacucho, where the Yanayacu greets the Amazon, the majority of the population leaves during the rainy season. Most villagers have no such recourse, and the river in flood enters their lives by the front door. But no one lives far from river access, and the river runs through the villager’s lives just as blood runs through their veins. The Incas looked upon the milky way as a celestial river, a common enough symbol that I wouldn’t be surprised to find in Amazon tribal myth. Hulber told me that the Yagu believe the ceiba tree is the Mother Earth, and that when it fell, it created the Amazon from its trunk and branches. I can see in the ceiba the Amazon’s serpentine form, and I can see the wide meandering and slow current of its tributaries in the ethic and outlook of the people who live by it. They are often quiet and reserved, but quick to laugh and banter, greeting each other from canoes and calling out from shore to passing boatmen. Generous, peaceful, and kind, they share what they have, in an easy and necessary exchange with echoes of the Incan system of reciprocity. They move methodically but unhurriedly, without much in the way of possessions except what they absolutely need, and much of what they need, like the fishing poles we used, they improvise. In almost every boat is a plastic soda bottle cut in half to use as a bail – I’ve seen these deep in the forest, carried by flood water, their bright artificial color incongruous against the shaded jungle foliage. The homestead I saw on my first day here is fodder for thought, and I’m looking forward to visiting Ayacucho to learn more about the permanent residents of the jungle. 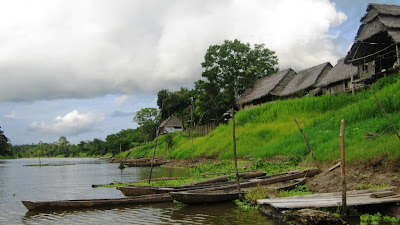 All these ideas, and a couple of guys and a sloth hanging out fishing for the afternoon. The hours passed by and we flipped piranha after piranha out of the water, throwing the guts to a black-collared hawk that dove from a nearby tree to snatch entrails from the water. We caught a number of other fish, catfish and perch, and something larger and meaner-looking than piranha, a dark brown monster with spines and tremendous teeth filling a gaping mouth. Not a bad way to spend a vacation, fishing in the Amazon.

They served the piranha for dinner. No one would touch it until I took one off the tray, head still attached, and went at it after sprinkling it with lime. Not bad, but too bony. 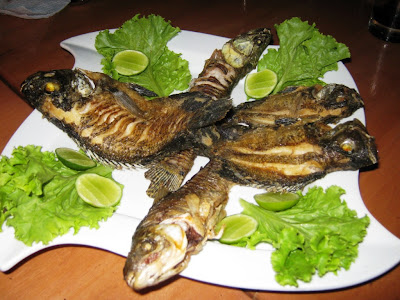 In an entertaining demonstration of cultural and linguistic barriers, the Frenchman tried convincing me to eat the piranha’s eyes. I did not.

The rest of dinner: squash soup, chicken, hardboiled eggs, olives, rice steamed in a sweet, flavorful local leaf, cooked and sweetened plaintains, pineapple, and tomato and avocado sandwiches. Like all the meals here, served buffet style and far more food than necessary. I find myself going back for more every time; my hunger is ravenous.

After eating I smoked a cigarette, one of the Inka brand I brought from . There are ashtrays everywhere, and the mosquito netting blurs the distinction between “inside” and “outside.” I’m the only smoker. No one seems to mind. Many Peruvians smoke very causally – I recall Henry Jorge bummed a few smokes off Tom and I one cloudy night on the Inca Trail, while we watched stars peek from the southern sky and drank sangria.

A short time after dinner we jumped in one of the larger boats and went upriver in the dark, looking for wildlife with a flashlight. As we passed , we saw several sloths, each high in their individual trees. Occasionally kingfishers would dart from the trees and fish would leap from the water, silvery streaks in the torch’s powerful beam. We entered a lake and one of the shores fell away into the darkness, and I felt suspended in an inky void, black water calm on all sides and a black ceiling hung with stars doubling as chandeliers. We motored on while I wondered how anyone could possibly keep track of our location, and a few minutes later, when a spectacled caiman’s eyes shone near the shore, we pulled in close. It swam away, disappearing in the water. Too late, we tried again - and again, we were in the dark, a darkness populated by lightning bugs and lit by distant lightning. Finally, we found a caiman’s eye-shine and pulled up to shore, close enough to see it in detail. One of the guides, Moses, lowered himself over the side and waded in ankle-deep water right up to the caiman – then he reached down, grabbed it by the neck, lifted it from the water, and brought it into the boat. For a while, he showed it to the new arrivals, a young couple from . Then, he handed it to me. I took it firmly by the neck for a few minutes while Hulber took a photograph, and before I had time to think, I released it into the water. In my hands, it had been unmoving, hanging limp and frozen in the light from my headlamp and Hulber’s torch. In the murky water, in its element, the caiman moved with grace and form, propelled by a tail as long as its head and body, legs trailing as it undulated into the darkness outside the reach of our lights. 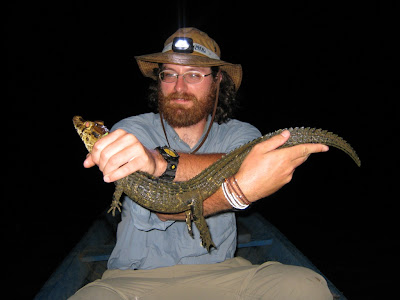 Only after it disappeared into the lake did I think, “I held a wild spectacled caiman in my hands!” It didn’t seem like a big deal at the time – I’ve been able to do some amazing stuff in – but it was a big deal. Spectacled caimans can grow to two meters or more and live for decades. As soon as Moses pulled it from the water, I’d wanted to see it closer, and maybe hold it. The guy next to me didn’t want anything to do with the caiman, moving away pretty rapidly when Moses handed it to me. It’s been a day of that – the same guy also freaked out when a fish leapt out of the river and landed near his feet in the boat, and when the same thing happened to the French girl, she actually stood up and screamed.

So far, nothing in the jungle has scared me more than the idea of tipping a canoe. And that only because I’d soak my camera. 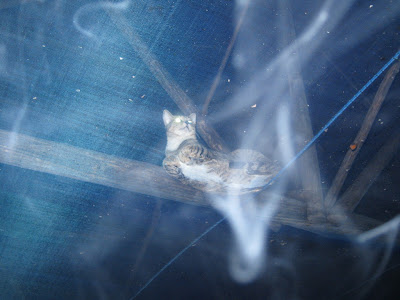 When I started to write, the lodge cat – Panda – sat above me on top of the mosquito netting. She’s gone now, trotting off into the darkness. The jungle must be an interesting place for a domesticated cat… That strange, syncopated, echoing clicking has started again – I keep meaning to ask Hulber what makes it. It reminds me of the Kodama portrayed by – benevolent forest spirits that make a strange clicking noise. I find it incredibly relaxing to lie down in my bungalow, with the darkness of the Amazon all around me, listening to the noises of the jungle as I drift off to sleep. At night, the volume of the jungle takes on a depth and breadth as rich as a symphony, with modulations in tone and pitch and rhythm, with themes and measures and solos, fugues and crescendos, and pregnant pauses. None of the forest sounds frighten me, or make me nervous, perhaps because no one else pays them any attention and perhaps because I have no frame of reference. Moses said the other day that he loves how quiet the jungle is, and I wonder if he would be as disturbed by the silence of forests as some people are by the cacophony of the rainforest.