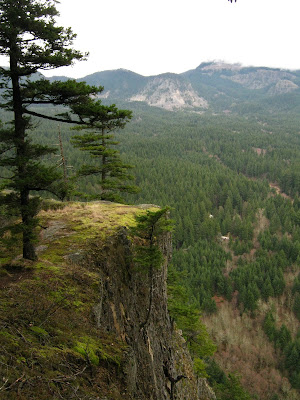 Superbowl? May the best team win. I went hiking instead, and I think that , the sun and clouds, and native vision-quest pits were the real winners on Sunday.

The Gorge was overcast in the morning as I drive past Multnomah Falls, but the clouds began to tatter as I arrived at . In the parking lot, I met another hiker named Kevin (Kenneth? I don’t remember) who had driven around the mountain looking for the hidden trail – from the parking lot, the trail starts a ways down the gravel road, but it isn’t very visible from a moving car. We set off together behind a man and his two young grandkids.

I'd been looking for solitude, but hiking with Kevin was pleasant enough. is a steep trail, and our conversation forced me to concentrate on my breathing, and our pace gave me something to test myself against. I weigh about 10-15lbs more than I should, and it isn’t muscle weight. I also haven’t been hiking regularly over the last two months of eating and drinking, so the trail became a workout, and about three quarters of the way up I stopped and gave Kevin the lead so that I could catch my breath and finish the climb alone.

Though is 1907ft tall, the unofficial trail starts halfway up on the north side, so that the climb is only 1,170ft. , and its partner, , are volcanic intrusions that erupted through the basalts a few million years ago. stands alone, an isolated cone towering over the small town of . At the top is one of the Gorge’s more important archeological sites, a collection of native vision-quest pits in the steep talus slopes covering the summit. Native American men once climbed the mountain and spent the night alone as a coming-of-age rite. To facilitate visions, they forced themselves to stay awake all night in a state of heightened awareness, and built rock walls and pits that are still present today. Once a spirit or guardian appeared, it remained with that person for life. A sign at the summit warns hikers: “This archeological site is extremely fragile. Just walking over it will damage important cultural features. Therefore, the USDA Forest Service has closed the site to hikers. All visitors must stay on the trail or within designated areas shown on the map.” 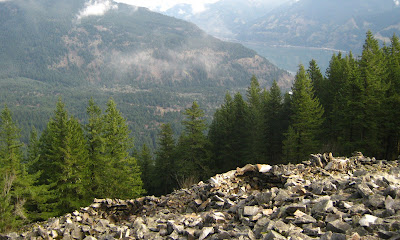 The 1940 book ", End of the Trail,” by the Works Projects Administration (WPA) of , describes a native legend: “The Indians believed that the Great Spirit set the whirlwinds blowing in constant fury about as a punishment to those who, breaking the taboo, had taught the white men how to snare salmon. ..." 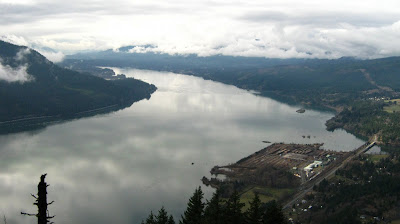 There’s certainly no escaping the wind on . I reached the top and quickly cooled down in the cold breeze swirling around the summit. I went right on the small loop trail and found Kevin at the top of the first viewpoint, looking over the smooth-as-glass as far west as Beacon Rock. A long train rumbled past on the side, and the sound drifted up almost 2000ft across the river and above . Otherwise, silence, the wind in my ears, and a heartbeat returning to normal after a steep mile climb.

After a quick rest, Kevin and I walked to the eastern talus, where clouds swirled and filled the valley between and 2,948ft to the east. Vision-quest pits drifted in and out of the foggy talus, and the clouds lifted, and the sun shot down searching beams over the forest and far ridge. Across the river, was swathed in tattered cloud and snow and the dance of the sun. 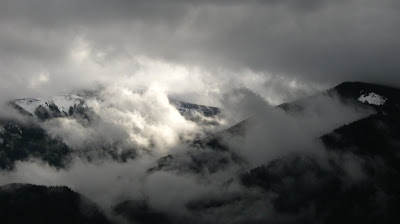 I cracked open my celebratory beer, and sat down on a rock, enjoying the interplay between sun and cloud, river and mountain, the thin works of man clinging to the river’s shores while pine-clad slopes and rocky cliffs towered a mile above the highways and rail tracks. Against the distance, the traffic on the highway appeared to make no progress, and in front of me were four or five vision pits, updateable and who knows how old, that had withstood the elements on top of an old volcano, and that had harbored the coming of visions and the appearance of spirit guardians who lived lives equally as long as their ward’s.

Kevin left to start down the trail, and for the next hour I sat with the vision pits dappled with sunlight. I walked around over the talus, seeing the slope and the pits and the distant mountains change in the light. I felt as if my own vision had grown sharper – at one point, I thought of my friend who I’d left my itinerary with; my very next thought was that the talus was unstable and that I needed to be careful about loose rock that could shift and twist an ankle. Immediately after that thought, a rock shifted under my foot and I nimbly stepped away. I can’t put too much stock in prophecy, but it happened just like that, and I went back to meditating on the view.

When the clouds rose up again, I wandered around and investigated the patterns of lichen and moss on the rocks and twigs of a small vine maple. Like the vehicles on the highway far below, tiny worlds exist in shades of burnt orange, bright green, silvery gray - in the miniscule, strange and alien life-forms parliament together on twigs no thicker than a pencil, or on the shaded face of a rock. In a space barely a third of an inch across, life blooms in unusual forms, and I imagined it to be an alien city, or an Alice in Wonderland theme park missing the caterpillar (who is out back smoking a joint and taking photos of very small things). 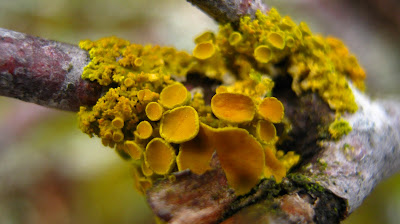 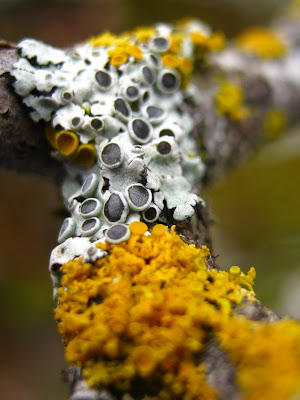 I never looked at my watch, but driven by some inner chronometer, at some point I grabbed my pack, did a quick check for accidentally dropped garbage or gear, and headed back towards the first viewpoint, now dim through a veil of cloud. The upper half of the mountain remained wrapped in cloud as I descended, feeling the strain on my knees grow as I entered sunshine tumbling through the forest halfway down. 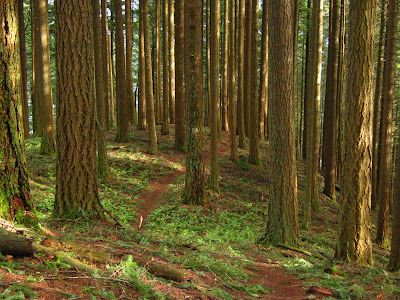 As is usual for me, the climb had been a physical exertion, with my focus more on myself then on my surroundings. On the descent, the forest captured my attention, with mossy trees standing over deep green coils of fern, sharp Oregon grape, and jumbled talus slopes. The sun burst through at odd times, and the forest responded with a symphony of browns and greens and darting yellows. I walked through a cathedral of firs, the trail my guide and the sun leading the way.

I cut off the main trail at a very steep spur-trail that lead down to an outcrop with great views east to Augsberger and . The view was spectacular, but the cliffs treacherous and dizzying – no one would find you if you messed up and fell from here. In the distance, the ran blue and reflective, smooth as a mirror, and the sun flashed down on and the pointed crowns of hemlock and fir. 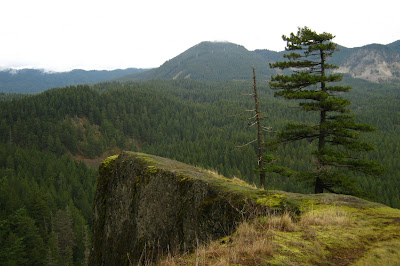 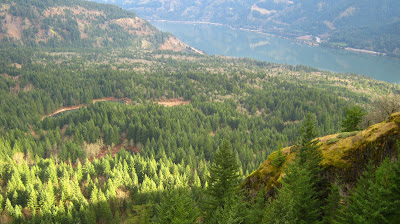 I reached my truck as more people arrived in the lot – a busy day at . I put on music for the drive home, and as a few drops of rain fell from warm clouds over the river, sunlight scattered through the drops on the windshield, and the lyrics synced up with the twisting bends of the state highway, the freight train rumbling on down by the river, and the long interstate curving along the base of the Oregon Gorge, where progress is measured in spirit as much as it is in distance.
Posted by Jason E. Weeks at 6:39 PM
Email ThisBlogThis!Share to TwitterShare to FacebookShare to Pinterest
Labels: Hiking, Outdoors