Lounging between hikes through the jungle in the hammock hanging from my bungalow’s back deck. More guests are here – the boat has just arrived from its daily three-hour sprint from Iquitos. The Frenchman and his Peruvian friend left earlier, so for a while there were only three of us. Arriving here is like arriving in paradise, although you don’t recognize it immediately. The speedboats are cramped, and when I arrived my left arm was burning from the sun. I craved a cigarette, needed a stretch, and as the boat tied up to the dock and I stepped out into the slow humid heat, heavy with a thick, vegetative smell, the lodge looked like a cheap Disney facsimile designed to impress more than to provide an authentic experience. But that was post-Iquitos, and I was in no mood for anything resembling that frontier town. Thankfully, Muyuna is an oasis in a living desert – how much more remote can you get than a several-hour boat ride from a city that can only be reached by traveling thousands of miles by air or river? So to the new arrivals – welcome. There are things here that can kill you and things here that can drive you mad. And there is great beauty as well. 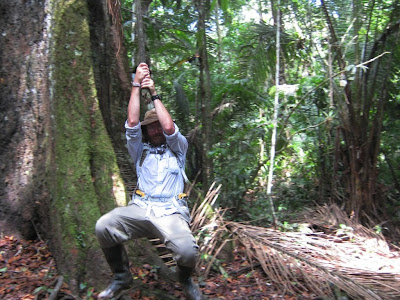 This morning’s hike was just Hulber and I. I overslept – last night I felt like I was moving on the sea when I laid down, but the cacophonous selva put me right to sleep and I rolled over again when my alarm went off. At the breakfast bell (a loud ringing cowbell), I leapt up, dressed, brushed my teeth, and ran to the main hall and downed a cup of instant coffee with a cigarette. I was in rubber boots by 9, and Hulber led off into the jungle behind the lodge along a series of trails, showing me various plants and animals and sharing ethnobotanical knowledge along the way.

I said that the lodge is paradisiacal – if so, the jungle behind it is hell, slick with deep mud and decaying vegetation, and tangled and overgrown. We need machetes to cut through the vines and limbs that grow far more rapidly than the rate the annual floods obliterate the trail. Giant bees and wasps skirt through down-hanging vines like annoyed bombers, mosquitoes buzz and whine constantly; and ants – fire, army, bullet, leaf-cutter – crawl and haunt the leaf litter, the leaves, the branches, the trees. Hulber has been bitten twice by bullet ants – 24 hours of the most intense pain possible in the insect kingdom, with blistering fever, delirium, nausea, diarrhea – and only then do the effects lessen. We found them in two places – a nest in the roots of a tree, and a few on the end of a vine that Hulber cleared with his machete before I swung around like Tarzan. 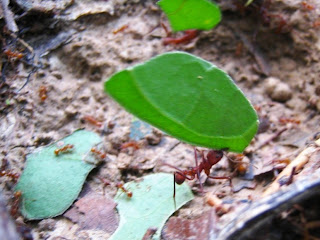 It isn’t hard to find ants in the jungle. Streams of army ants, blind and following each other single-file, cross the trail and forest floor. A specific species of tree has developed a symbiotic relationship with a species of ant; the tree branches are covered in ants, which prevent epiphytes and bromeliads from growing on the tree, and the tree has thorns to deter predators from eating the ants. The path skirted a colony of leaf-cutter ants: a pile of dirt more than twenty feet by twenty feet, devoid of vegetation. Hundreds of soldiers carried pieces of leaf like tiny battleships with green sails unfurled. In the jungle, watch where you step, where you put your hand, and where you sit down.

Throughout the hike, Hulber pointed out termite nests in trees, massive bulbous growths that resemble dark brown tumors at the intersections of branches and trunks. One of them was low enough to study. With his machete, Hulber scraped open the papery surface and as termites appeared like ghostly ants, he told me to put my hand on the nest. 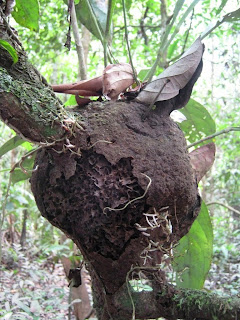 I declined, the first time I’d declined to do anything since arriving in the jungle.

Hulber told me again, and I thought, “He wouldn’t tell me to do it if it were dangerous or painful. I can do this.” Nervously, I placed my palm against the nest, and tiny whitish termites crawled all over my hand. Hulber started to tell me that natives burn termite nests to ward away mosquitoes, and burning termite nests seemed like a really good idea to me just then, with my hand covered in them. It tickled more than anything else, and I acted immediately as soon as Hulber told me to rub my hands together rapidly and smell them. Turpentine – termites contain a chemical that smells like turpentine, and is a natural mosquito repellent.

Lesson learned, again. Experience is the best teacher; trust yourself and others. The worst that could happen is you end up with smelly termite guts coating your hand.

We continued on, our boots sticking in the mud and decaying leaves, my feet and calves sticking to the inside of the boots, my shirt sticking to my shoulders under the straps of my pack. My forehead held a line of sweat under my hat. My skin itched with sweat, with insect repellent, with the crushed termites and tickling mosquitoes. We hacked at vines and long whip-thin branches, stumbled over roots and ducked under twisting aerial cords of vine, passed through beams of yellow-green sunlight and through wide shadows falling from the immense trunks of ceiba and maquira trees. 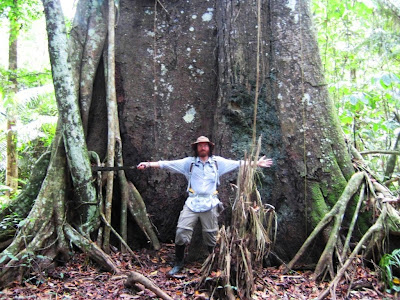 Pausing at a massive maquira, Hulber spoke about the forest. For years, loggers have illegally cut the largest Amazonian trees, and lodges, like Muyuna, have worked to save the jungle around them. In front of a tree 14ft in diameter at head-level, I posed for a photograph. There are no trees this wide in Oregon; there have not been for years, maybe never. The trunk is huge, dark brown and black, covered in strangler fig roots more than foot wide, and splayed out into mild buttresses at the base. Something animalistic happens in my mind when I see trees this big here – my rational mind knows that the living tree is just a thin layer under the bark, and the leaves high overhead, but the sheer bulk, the weight of the tree, impresses on me and I can’t think clear thoughts, as if I’m standing before an altar in deep worship. And maybe I am.

Leaving the shadow of that tree we walked back towards the lodge and lunch. Bright heliconia hung from the forest, which became an abstract tapestry of greens and browns in the growing heat. The thorned pyramidal roots of a walking palm occupied my attention for a while; the straight roots are exposed to a height of several feet, tapering towards a straight trunk. Legend has it that the palm moves up to four feet across the jungle floor each year, as roots die on one side and grow on the opposite. And lore has it that the Oje, another of the Amazon’s large trees, is the source of a milky, alkaline sap, discovered by shamans, that treats gastrointestinal parasites found untreatable by modern science. As Hulber showed me a tiny white-stripped toad, barely the size of a fingernail and almost invisible in the leaf-litter, I decided to believe the stories instead of dismissing them. What are one or two small rebellions against rational doubt when faced with facts as small as a toad, as thick as a tree, and as thickly tangled as the coiled and knotted vines and creepers stringing the jungle together?

After all, it was still morning, and I was deep in the Amazon jungle: above, a pygmy marmoset, one of the smallest monkeys in the world, scurried around its tree unburdened by our presence below, while macaws flew overhead, their cries echoing down through the canopy like falling feathers.