East of the Rainshadow: The Deschutes River Trail

With rain in the forecast, I debated Monday night whether to go hiking on Tuesday. A long pull from a bottle of Deschutes Black Butte Porter gave me an idea… 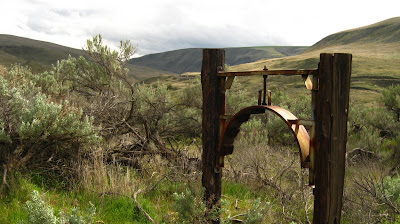 The drive to the Deschutes River was more a surfing contest than a drive, and it seemed like every truck I passed drove the exact wrong speed: too slow to stay behind, too fast to pass safely. But towards the rain slackened, and when I arrived at campground, it was drizzling lightly from thinning clouds. I pulled over at the first pay station, and chatted briefly with the camp host. I admit a fondness for those rugged people who sell bundles of firewood to hordes of summer campers and off-season RV wanderers – they’re American in the biggest and best sense, unapologetically individualistic and yet big-hearted and welcoming, and eager to share their odd ideas with colorful language, and in this case, a whole lot of spit.

But I digress. After parking at the back lot (per the Portlandhikers.org field guide), I strapped on my pack and crossed a long lawn filled with geese and slippery droppings to the start of the river-side trail. Three other hikers set off at the same time on the upper trail and I didn’t see a soul until I was almost back.

The river trail is described as infested with ticks, but that didn’t bother me much as I strolled through little stands of trees and listened to birds sing above the river’s constant rhythm. My approach startled mergansers from bank-side thickets, and the hillsides glowed green and gold as the sun broke from the clouds. A few bouldery sections were starkly beautiful, with grey and brown stone covered in brilliant green lichen, red moss, yellow desert parsley, and carpets of grass laced with tiny pink and red flowers. Walking further, I passed an increasing amount of balsamroot in flower, accompanied by lupine and phlox. Wandering, with no real intentions, I soon found myself among large numbers of wooly-bears at Colorado Camp (3.3 miles). 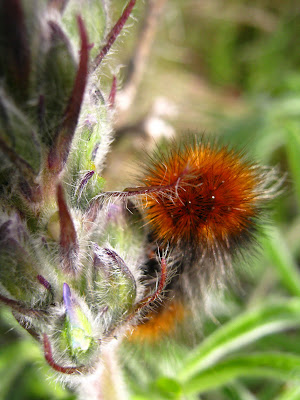 From there, I became concerned with ticks. The trail disintegrated into an unmaintained game trail, crisscrossed with fallen limbs and marked only by flattened grass. At every step, I sank into the waterlogged ground, once into mud over my ankle, and the vegetation was tall and dense and encroached over the narrow path, rubbing against me at every step. I gave up after a mile and hiked up to the road, where the river was quieter and the ground more solid, and my attentions shifted from the small and beautiful to the large and grandiose. 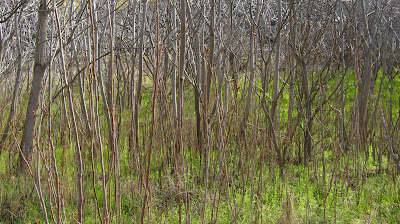 Past Gordon Creek, the gravel road runs under a long cliff blasted from the hill, and the violent history of this area is cross-sectioned to make a geology-lover’s heart swell. Where the cut is highest, basalt columns radiate immense spokes in strange wheel-like patterns, and where the hill slopes more gently, it soon rises into jagged ramparts with rock arches overlooking grassy bowls where balsamroot blooms. 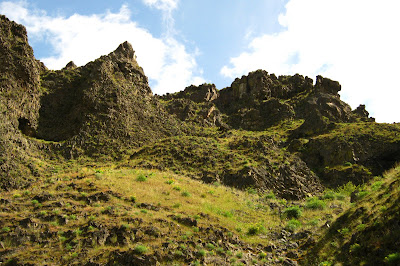 Because the road follows an old railroad bed and doesn’t gain any elevation, staying about the same elevation above the river, I didn’t notice how hungry I was until I passed a campground under powerlines (Gordon Ridge Camp, 5.3 miles). I stopped to eat and was surprised to find it was almost 2pm – my turn-around time. I’d read about a lot of cool man-made artifacts on this trail – railroad cars, bridge remains, an old homestead – but I couldn’t remember how far up the canyon those artifacts were, so I headed back and continued my meditations on life and death other and “big ideas.” 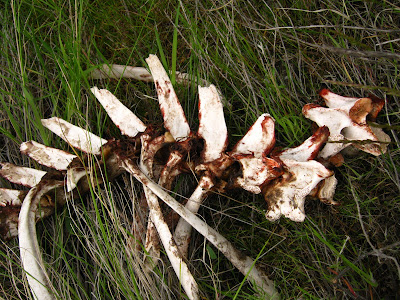 Big ideas, as in, the canyon is freakin’ massively big when you’re trying to leave. I’d round a bend and see the next bend ahead, and give myself 10 or 15 minutes to get there. Then I’d plod along, and plod along, and plod along some more until 30 minutes went by and I wasn’t any closer. Distances lost their meaning, compared to the depth of the sky; the seemingly barren, rocky landscape lost its emptiness as the sun composed plays of light and shadow on the grass; and the afternoon lost its warmth as terrific gusts of wind roared up and down the canyon and ravines. The wind was insane – it tore my hat off my head, shook the photo opportunities off the fiddlenecks and sage, and disassembled the songs of meadowlarks like a tone-deaf grad student studying music theory. 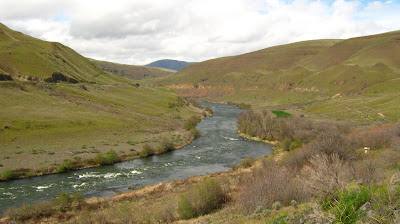 The canyon can be a lonely place when the wind blows hard and you haven’t seen anyone for hours. I’m starting to understand why those camp hosts are so weird.

Last week I immersed myself (literally) in a rainy and snowy hike, surrounded by old-growth and steep timbered ridges. The is the polar opposite – so empty it begs the imagination to fill it. When at the last bend the campground and the interstate bridge came into sight two miles away, I decided to take the trail to Ferry Springs, a few hundred feet higher up the rolling hills. Ferry Springs itself was anticlimactic, but the views were great, and a well-placed bench surrounded by trembling shooting-stars kept me from the worst of the wind and let me savor the view to the rain-caressed hills across the blue Columbia, the wind-turbines and crackling power-lines, the big empty spaces that seem tailor-made for road trips and exploration, for a Dean Moriarty to converse about them, for just sitting and looking and filling up on sun and sky and powerful land in every direction. 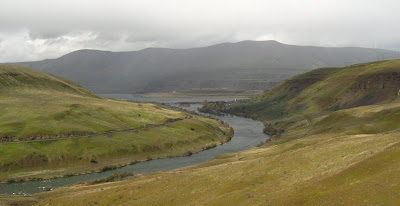 Eventually I descended, passing the first hiker I’d seen since starting out, and encountered a trailside plaque that made my day. I’d been disappointed that I hadn’t hiked far enough to see any of the historical artifacts along the trail. I never considered that the Ferry Springs trail itself is an artifact, built in the 1860’s for wagons and stagecoaches. The grades and wall-like piles of stones leapt out of the landscape then, and too quickly I reached the road and my truck, and the long drive home – but not before snapping a photograph of a large pipe, inscribed “Calm” at the end pointing into the canyon, and “Drama” at the end pointing towards the highway and the towns and cities. 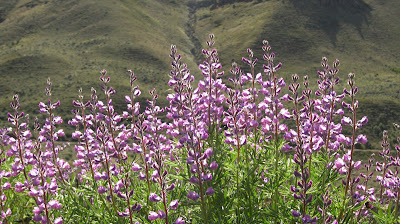 All told, I hiked 11.3 miles and gained just 800’ elevation. Spring is in force along the , and it’s worth every minute of the drive. Virtually complete solitude for six hours, lots of sun and flowers, expansive views, ample meditation, and thankfully, no ticks. I couldn’t have asked for more for my first trip here. Well, maybe that last third of a mile to the railroad car, but I’ve heard that burned down. I’ll have to go back to find out.

Posted by Jason E. Weeks at 1:21 AM
Email ThisBlogThis!Share to TwitterShare to FacebookShare to Pinterest
Labels: Hiking, Outdoors