The Piraha, a tiny tribe living in along a remote tributary of the Amazon, have no words in their language for past or future. Psychologically, linguistically, and conceptually, they live entirely in the present.

This isn’t so surprising after you’ve experienced the Amazon jungle. My journals are out of order, my internal editor is at a loss. My memories are a mobius strip, tautological and endlessly fertile. The difference between “it happened this way” and “it didn’t happen that way” are so slight as to be irrelevant. It’s not that I’m lying – it’s that I can’t prove I am. However vague or flexible my memory is, and however incomplete my journal – sometimes the sum of a butterfly outweighs the equation of an entire afternoon – what remains is a mirage of incomparable imagery and meaning so vast that it means nothing.

That endless split second in a car accident when you know you’re going to crash – that’s what I’m talking about. Moments that encompass the entire world.

Things are bigger here – snail shells, teeth, venom, spiders, trees, species diversity, leaves, thorns, insects, butterflies, storms, vines, hallucinations, appetites. The jungle is elemental and unforgiving, and it asks nothing of you except survival. Long term, I’m sure it’s hard to adjust. But I love it now and I wish I had more time to find out.

Spent some time watching a blackfronted nun-bird, a flock of parakeets, and a brightly colored bird, a barbet, its head brilliant red, with a yellow throat fading to a green belly. Wearing shorts, no shirt, barefoot, smoking a cigarette, in a hammock. Time like the river. In the crook of the nearest tree, a red-flowering bromeliad.

Thunderstorm moved in quickly; grew dark, a strong breeze through the lodge. The birds fall quiet. Thunder crashes nearby. I feel electric, my heart thrashing wildly like an animal in the bush. I hope it rains and moves on quickly so I can go on the next hike. Rain to clear the humidity, clean the air, bring the temperature down. The wind has really picked up, and still the storm moves closer.

Air slides through the mosquito netting and passes around and through the buildings as if the lodge wasn’t there – a wind tunnel wouldn’t show the air breaking around the walls, just a slight perturbation in the movement of the wind as it follows paths through the trees and down the myriad rivers. Follow the wind, is a good Amazonian expression. I just made that up, but it’s apt – surrender to the flow, let things go, don’t attach too much to any one thing or things. All life here is natural, including decay. The Amazon is a zen koan teaching patience, and the movements are calligraphic brush-storms representing acceptance. 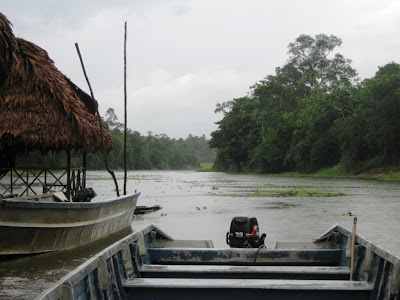 A fish-eating hawk has found a seam in the air the exact dimensions of its wings, and silence follows filled with thunder. Birds clatter at every gust; leaves and fronds clatter against the thatched roofs. The air is charged, scented with the heady aroma of the jungle, a heavy loam flavored with bark and water and damp soil. Now the rain, easy cymbals riding the snare and kick of thunder. The sloths in their acacias ride it out with infinite wisdom.

As the storm moves away, rain, and a sweet fragrance.

The fragrance of blood – mosquitoes are out.

Kerosene lantern, cup of coffee, moldy book – Birds of , Clements and Shaney, Ibis 2001 – cigarettes, headlamp. Outboard running against the noise of the toads. Thunder ceased, maybe it won’t rain and I’ll get to go hiking in an hour.

Squirrel monkeys, Hulber tells me, travel in troops that may number between one and two hundred. I travel alone. 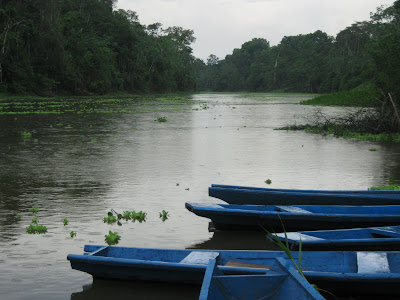 We put in and walked down a dark leaf-strewn path under overcast skies – Hulber and myself, the French/Peruvian couple, and Moses – he who caught the caiman the night before, who parted the waters. Ten minutes later, Moses stopped us under a tall tree covered in vine and strangler fig and laden with bromeliad fronds. About 40ft up, a small monkey sat in a balcony formed by a twist in the wood. It took me a long time to spot it – the light was dim and the monkey very well camouflaged, and I kept looking for a different shape. All I could see was its head, but it was unmistakable when I finally saw it. How the guides locate these animals sometime verges on magic, but in this case, they knew the monkeys lived in the tree and never strayed far. The trick is to look for movement, especially with monkeys and birds. I’m getting better at it – I spotted several sloths and pointed out the parrots on the boat ride in. I missed all but a flying silhouette of the toucans and their long beaks, and the sheer angle of looking straight up at the owl monkey meant we didn’t stay long. 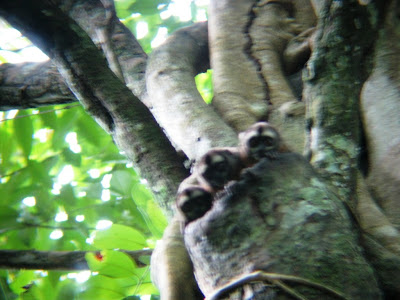 The forests are beautiful – many of the trees have wide buttressed roots and are covered in other plants. Roots extend and hang everywhere, waiting for high water, intertwining and plunging like curtains in a drama of unending decay and rebirth.

I can’t believe how interested I’m getting in birds. They’re easily the most commonly seen and most varied of all animals in the jungle. I understand the ecology of trees and flowers, but I always saw birds as secondary and uninteresting. All my photos are of plant life and insects; the birds and other large animals are too hard to photograph with a small point-and-click digital camera. I really want to return in the rainy season and see more, see what it’s like when the Yanayacu floods 15ft higher than it is now and all the animals are pushed into smaller parcels of higher ground.

Strangely and unexpectedly, the rainforest has been the most relaxing part of the trip. was bustling and active; the Inca Trail was physically challenging; the travel and logistical aspects were stressful. But I am “in” nature here and it is wonderful. I thought the mosquitoes, insects, rain, threats of sickness and disease, and heat and humidity would add up to be more discouraging than the other parts of the trip. Not so.

I have one and a half more days here. Tomorrow I visit a village, and then relax for a few hours before going out in the evening to camp overnight at a nearby cocha (oxbow lake). It sounds exhilarating and tough. Overnight in a tent in the jungle. It doesn’t get much more authentic than that. 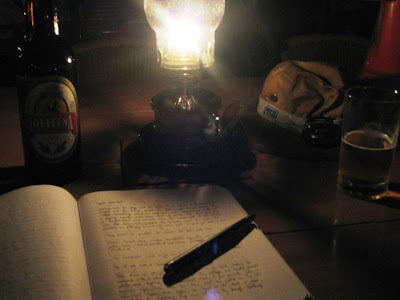 Writing by kerosene lantern is quieting and somehow right, as long as the night is filled with crickets. An outboard announces the return of a boat to the little dock with the thatched roof, reached by wooden stairs lit by homemade torches smoking in the languid night.

I may be the only guest still up. Activities here do depend on sunrise and sunset, on high water and low. It’s only 9pm and I’m not at all ready to sleep. I have a 6:30am expedition so I don’t need to get up before 5:30 at the earliest. I don’t need a full night’s sleep; I can nap between the village visit and the camping. I hope the staff hasn’t crashed and that I can get a beer – I’ve been looking forward to it. 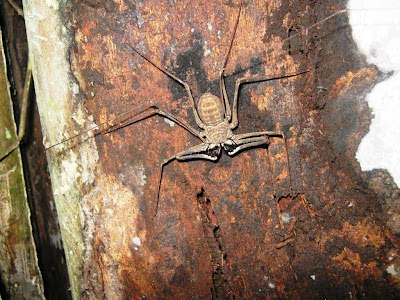 Tonight’s night hike was about an hour long, down a trail behind the lodge. A tarantula darted into a deep seam in a tree, and we turned off our flashlights to try to lure the spider out. The night was still, almost subterranean, a nuanced perfect dark with just a few hints of lighter sky. Hulber took a drink of water and I heard every action, though I couldn’t see a thing – the bottle cap twisting, the water splashing, fabric rustling and the gulps as he drank – and the night insects chirped, sang, whistled; water dripped from vines and fronds; and the haunting, almost human grunts of a tree-frog resonated in the forest darkness. 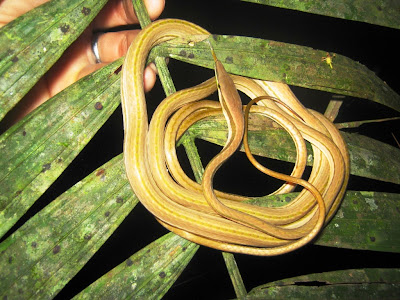 The rainforest is spooky at night. It feels like a room with high ceilings. The beam from a flashlight only penetrates twenty feet or so before a wall of vegetation blocks it, and if pointed straight up, the light dissolves into darkness through successive layers of canopy. The rumors of the jungle filled with snakes and spiders are only partially true – we found only one snake, a harmless sharpnose coiled on a palm frond, and the spiders – tarantula, whip, and wolf – ran from our lights. The most dangerous animal here is the mosquito – I’ve just been bit all over my hands and neck, my only exposed skin. 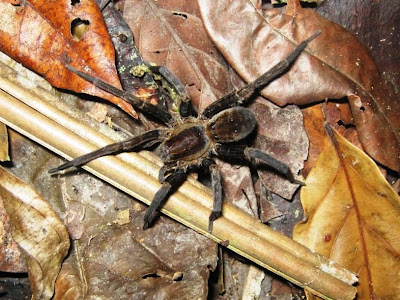 I wasn’t nervous about the night hike, though Hulber said most guests aren’t willing to do it. I don’t see why not – the forest is so different at night, interesting, full of unknown potentials. Depth changes. Trees and vines twist and loom in a limbo of darkness, and the understory adopts strange shadows and shapes and forms. Color depends on light, and light only comes from a narrow source whose power to penetrate is limited against the dense dark.

I got pretty lonely sometimes, in and while traveling. Not so much in the jungle, or on the Inca Trail, where there has been activity to distract me from thoughts of home. Perhaps cities foster loneliness, while wild places replace loneliness with a sense of actual place – you do or you do not fit in, and you’re challenged every moment, unlike in cities where you can easily find someone who speaks your language, or return to your hotel and shower, or find a hot meal. And once that wild sense of place is established, you want to share those experiences. I beginning to remember that I’m a guest here, and that guests return home.