"There is a deeper form of play, akin to rapture and ecstasy, that humans relish, even require to feel whole… In its thrall, all the play elements are visible, but they're taken to intense and transcendent heights…

Deep play always involves the sacred and holy, sometimes hidden in the most unlikely or humble places… the physiological goal is to impel the initiate into a higher state of consciousness that kindles visions and insights, in a locale where survival may depend on a combination of ingenuity and nerve." * 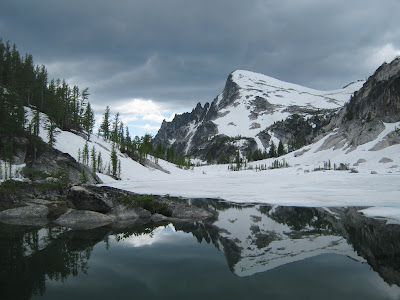 Finding a suitable spot to pitch a tent isn’t always as easy as it might seem, and I’d slept poorly for the third night in a row. Morning came early, with a bright sun shining above . We broke camp, slathered on DEET, shouldered packs, and headed out on what was, on paper, a short, easy 6.5 mile day-hike with 2600’ of elevation gain, and 2200’ of elevation loss. But this wasn’t a well-graded, wide National Park or Forest Service trail – this would be a gnarly, rock and root filled climb into snow, across boulders and granite slabs, down loose scree and avalanche rubble, and into tangled thickets and swiftly darkening forest.

The hike to Viviane felt easier than the day before, despite the lack of sleep and other ailments, and we ate lunch before crossing the log bridge and hiking up above the lake. The trail climbed a steeply sloping granite slab, dangerous because the snow hadn’t fully melted out and covered the rebar supports embedded in the face, and the rock was wet from snowmelt. 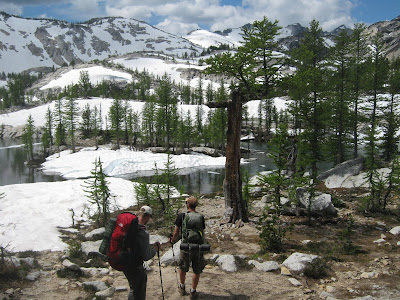 From Viviane, we followed tracks in the snow to , half-covered in turquoise-blue ice and surrounded by melting meadows, granite covered in snow, and spindly alpine fir. One at a time, we crossed a large snow bridge over the stream between Leprechaun and Viviane, and pausing to reflect, Derek pointed out our first mountain goat on a distant snowfield above the lake. The clouds built into frothy masses of white and gray and became a blade, serrations marked by avalanche shoots filled with sun-brightened snow. 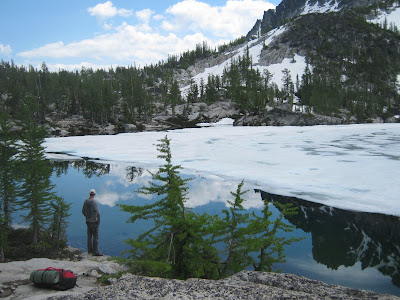 The outside world fell away. Suddenly there was nothing but raw experience and immediacy, nothing but sensory input, a perfect conjunction of thought and action and feeling, a complete immersion into the real and a disappearance of anything superfluous or unrelated to the experience. When I’m outdoors, hiking or backpacking, I often think about work, about the bills I have to pay, about my family and friends, about weighty relationship issues. Occasionally these thoughts fade into the background. Sometimes they disappear completely, only to resurface when it’s time to head back, or when I see or do something I’ll want to tell someone about. I’m rarely entirely focused on my activity. There’s almost always something in the way.

Not this time, not now. This time there was no outside world, nothing but what was in front of me – McClellan’s serrated ridge, ’s dark waters reflecting the mountains, steep scree and snowfields. Under my feet, snow, and on my face, sun and wind. Mike and Derek were present, of course, but they belonged there, as did the twisted firs, the rushing stream, the dance of light and shadow. My movements were unplanned but exact, as though my body knew exactly how to balance, where to step, when to stop and when to start. And my thoughts were calm like the lake water, even when the wind blew across its surface. You can enjoy something until you realize your enjoyment will end, and then your enjoyment is tempered or sweetened by sadness; I only saw what was in front of me, but I knew it fully, and I imagined the next several miles of lakes and mountains and snow and I was at peace with the immensity around me. 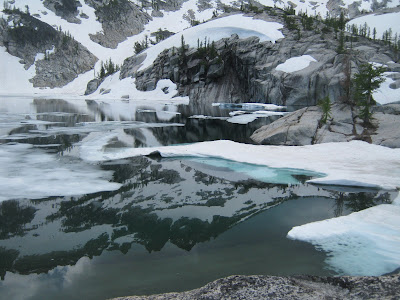 Buddhists talk about “Being-Awareness-Bliss,” and almost all the way to , I embodied “Being-Awareness-Bliss.” I felt like I was walking in a Chinese scroll, where the mountains and waterfalls and pines recede into the void, and where man is an impossibly small figure placed in the corner for scale, and for a balance and harmony between nature and life. I felt necessary, exactly the right size. 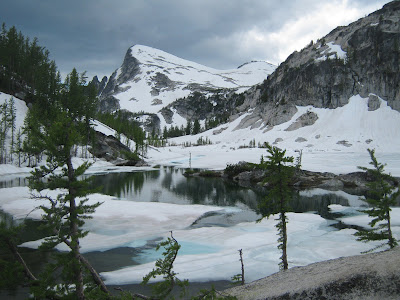 I felt right – acting naturally without thought, sensing without the need to reflect, knowing without doubting. Everything was more real, more vibrant, more genuine - not just what I saw, but also the wind on my face, the snow and earth under my boots, the weight of my pack and the movement of my limbs, the warm blood in my muscles. Later this sense of completeness would fade as the weather changed and I grew accustomed to my surroundings, but for long stretches of trail I moved in a state of peace.

would rob me of that, but there were miles to go before then. 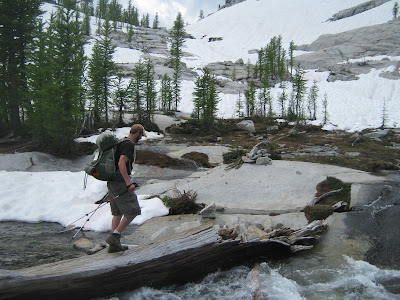 We continued from Leprechaun through snow and meadow to . Darker clouds began to move in from the southwest. The trail gradually turned to snow near , but each stream crossing was manageable and the trail easy to follow. We wore yak-traks from here on, rarely slipped, and rarely post-holed much more than past an ankle. We didn’t have crampons or ice axes, but I never felt like I needed them, maybe because I was foolhardy, or maybe because I just didn’t need them. 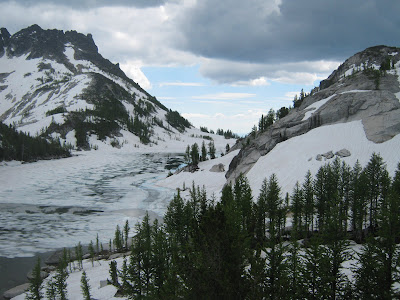 In the Enchantments, every lake seems more incredible than the next. Photos and words can’t do justice to the color of the ice and water, or the contrast between snow and stone, sky and meadow. Rounding , the trail became mostly snow, and a quick drizzle of rain rippled the edges of the lake where the ice melted into a clear turquoise. But unlike the snow, the rain let up, and we took our packs off to rest like hermits by a boulder shaded by an ancient pine. The basin stretched out behind us, snow lying under bright green trees, and rocky hillsides arching below Prusik’s arrow-like summit. Then, just before , I walked to a small viewpoint to look out over and the glacial valley that drops below Little Annapurna to and falls from the basin into deep forests. Something moved in my peripheral vision and I turned to see a mountain goat walk out of a stand of trees and approach within several feet of me. 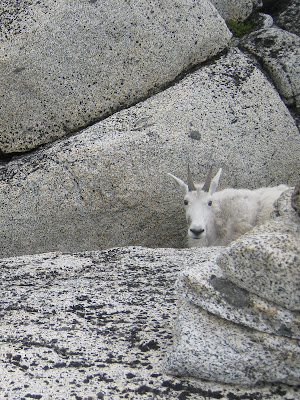 There is something inherently likeable about mountain goats - their dark eyes and beards give them a sage-like appearance, and their sureity on rock and slope is reassuring. They're in control, comfortable in their environment, and steadfast and solid as the mountains. As this first goat passed me, though, I was immediately nervous and didn't think any of this. You just don't usually get this close to wild animals, and goats are tough, compact creatures. The goat's winter wool was peeling, and two short, black horns jutted from his head. Black eyes watched me carefully as he passed, climbing up the rock in a clatter of sharp hooves. The goat looked back one more time, then disappeared into the trees.

I was shocked – I think I said, “Oh my God” and as I turned to watch the goat, I pulled out my camera. Mike and Derek did likewise. We expected to see mountain goats in the Enchantments, and we’d already seen one at a distance, but I didn’t expect to see one so close, behaving so casually around people. I thought this might be the only one we’d see so close. I was wrong.

At , filled with thick cracked ice and surrounded by steep granite walls, we ran into two older hikers exploring from their base camp. We’d met them before, at Leprechaun, , and together we watched another hiker descend a steep trail in a snow slope above the lake. Above the slope, a notch led higher into the upper basin. Coming around a corner, we encountered the hiker and his family watching a mother goat and her kid. 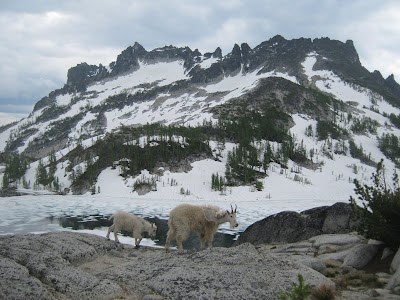 The human family was the same we’d met at Viviane the day before, and they were taking a break at the edge of a rocky open area with expansive views of , Prusik, and McClellan. The goats were near the cliff edge, but they soon ambled towards us. Like the previous goat, the mother’s coat was shedding, and the kid was an incredibly cute ball of wool. 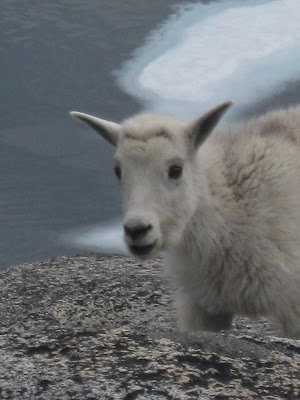 Mike climbed atop a low ridge of stone and the mother and kid climbed up to meet him. Standing a few feet away, Mike and the goats posed for the camera before all three animals ambled over to join Derek and I at the snow-free rocks at the edge of the cliff. The family of hikers left us to climb up the notch, and we relaxed with the goats, watching and taking pictures as they ate the flowers off penstemons. It felt unreal to be so close to wild animals, especially a mother with a baby. They were wary – they kept us in sight with their big black eyes – but neither goat showed fear and both came within just a few feet of us. Goats in the Enchantments are obviously used to people, and in an environment with little salt, the goats have learned that backpackers are an excellent source of nutrients. Campers are advised to keep boots and packs in tents to prevent goats from chewing up gear in search of salt, and the wilderness permit instructs bearers to urinate on “huge” flat rocks so that goats won’t dig up the fragile meadows. 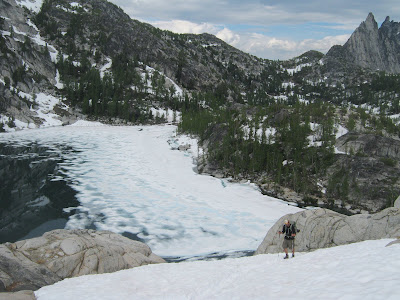 The day was growing later, so we left the goats and began to climb up the notch into the upper basin. The trail below the snow probably switchbacks a few times one or two hundred feet to a cluster of boulders, but the trail in the snow did no such thing, heading up in a straight line above the lake. The yak-trak’s coils dug in as we stepped in footprints, one foot after another, using trekking poles for balance and focusing on every step. The footprints ended near a boulder. Lifting a foot to bridge the gap where the snow had melted away from the stone, I slipped off the granite and fell, stopping myself before the long slide to the lake. 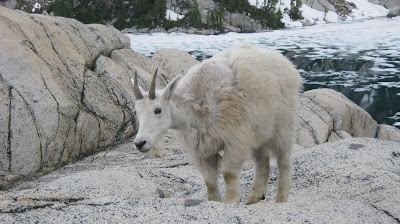 As falls go, it wasn’t bad. We all made it off the snow without further incident and broke for a snack, and we were soon joined by another inquisitive mountain goat that circled the boulder we used as a table. After eating, Mike felt the call of nature and stood up on a large nearby rock. As soon as the goat heard the sound of liquid, it ran over, hooves clattering. Derek and I shouted and Mike barely had time to zip up before the goat was up on the rock, licking at the fresh urine. 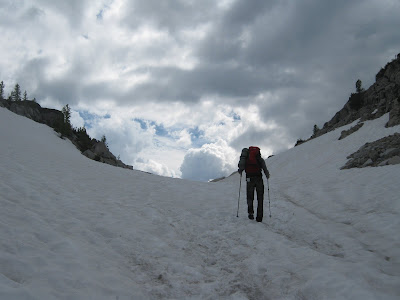 Mountain goats are cool but this was a little gross, and we decided to keep moving. Packs cinched up, we ascended the pass at a more moderate slope, and very soon we stood at the edge of the upper Enchantment basin, staring at a landscape forged in ice and shaped by wind and snow.