While the Dark Leaned In: Fall Equinox, 2010 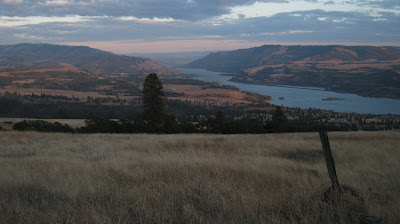 More photos here
I had the pleasure of celebrating the fall equinox with some very good friends at . Frank had invited me and his friend, Brook, several weeks earlier, and we watched anxiously as the weather opened up a sunny window right on the 22nd. We left town at noon under clear skies and warm temperatures, and after great conversations in the car and a stop in (to visit a rock and bead seller named Janet Planet, no less), we arrived at with a ton of positive energy and set off to visit some of Frank and Brook’s favorite spots.

is a large area of land managed by the Forest Service. It lies in , between and . Bordered on the west by Coyote Wall, a massive anticline, and the town of on the east, is a rolling grassland broken by creek drainages and stands of oak and pine. is on the dry side of the Cascades, and has one of the earliest spring flower blooms, when grass widows explode in purple sheets across the March meadows. In late September, the grass is brown and the creeks are dry, but there is a quiet, desolate beauty to the place - the crowds of wildflower seekers are gone, and the air is crystalline and fresh. It would be a good place to film a western, ponderosas red in the sun and the wind rippling across prairie grass.

I usually hike west from the trailhead, heading uphill and left into forests, above the tumbled canyons of the Labyrinth and across to Coyote Wall. I hadn’t explored much to the east, and after reading a selection from a Gary Snyder poem, Frank led us uphill to the east. After passing the ruins of an old corral and a natural basalt arch, we arrived at a large fallen snag he called the Dharma Tree. 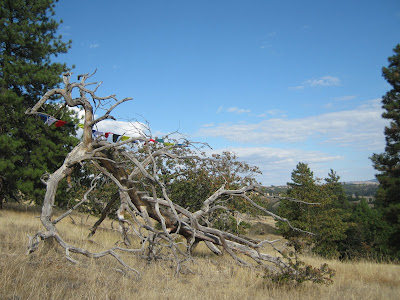 We rested there for a while, and Frank strung Tibetan prayer flags from the Dharma tree. It was mid-afternoon, and was bright under the sun. But as the sun sank lower, we climbed higher between two stands of oak as the sun cast long beams through the clouds and on the plateaus and scablands around the . Frank and Brook hung another string of prayer flags, Frank planted arrowleaf balsamroot seeds in a large patch of earth, and I found a hawk’s tail-feather in the duff beneath the oaks.

It was a day of serendipities and coincidences – if Brook hadn’t seen a critter under the oak, and if Frank hadn’t rustled the leaves with his hiking staff, I’d never have seen the feather. We’d already set a great tone for the day, pacing a train by the river, sharing snacks, drinking a bit of beer, and goofing off. We’d seen where deer had bedded down for the night in the grass, found a beautiful green snake, and basked in the sun after a week of rain.

It was good to be outside. 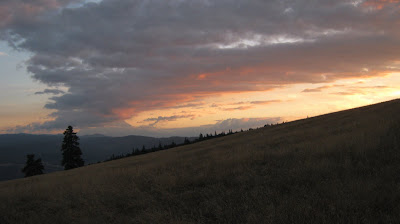 As the sun sank, we hiked west to an open hillside, with the decaying remains of a barbed-wire fence stretched through the brown grass. Two deer appeared in the meadow above us, then folded into the oak like shadows. The sky glowed with sunset. appeared in silhouette across the gorge, and lights began to appear in the vast distances opening below us in evening light. The full moon would rise from the east at 6:25pm, followed by Jupiter at 7:15pm, and summer would officially end at 8:09pm with the equinox.

The moon came up, a silver coin in the soft purple-lavender sky above . A line of cumulus, smoky orange and scarlet from the sun, arced all the way overhead from Hood. Jupiter appeared pendant below the moon, and the air turned blue, then indigo, and the last light faded in magenta waves from the west. 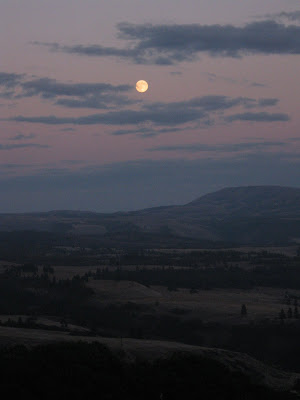 As night fell deeper we hiked without headlamps down through the meadows, guided by Frank and the light of the moon. It was the kind of time William Stafford meant when he wrote the lines “So magic a time it was that I was both brave and afraid. / Some day like this might save the world.”

We descended to another tree – I couldn’t tell you where or retrace my steps – a place that Frank has visited many times. Frank planted more balsamroot and Brook and I enjoyed the moon rising in the deepening sky. Eventually we followed a small trail, almost a game path, down through the trees and into the draw leading past the arch and old ranch. Somehow I ended up in front, leading in darkness by LED headlamp down a trail I’d never been on. I charged ahead, letting my feet and eyes collaborate and guide. Only after I became aware of what I was doing did I ask if I was on track, and only after I was told “yes” did I lose the trail, brought back by gentle directions from the voices in the night behind me.

Down past the arch, the ranch and the corral, down through the lower meadows and to the lonely trailhead lit by the climbing moon. In the nearby ranch-house a few yellow squares of windowed light. The gorge was bright from shore to shore. A light wind, still warm – t-shirt and pants weather – and a last look at the silver grassy slopes of . We piled into the car for the drive home, quiet in our thoughts. I’ve never before honored the earth so ritualistically or holistically.

My respect for the wilderness is my application of that term to include even human-altered landscapes, so long as they foster the wild within me. I believe in, and practice, leave-no-trace principles. My spirituality is deepened and molded by my outdoor experiences, and yet… Outdoor experiences don’t have to be so intense or serious or solitary all the time. It’s not always about testing yourself by hiking far or climbing high, or going into extreme conditions. They can be about silence, and beauty, and appreciation. At , on the fall equinox, hanging prayer flags and planting seeds made sense. Sharing food, time, and laughter made sense. Relaxing and watching the world majestically turn made sense.

Even the jammed-out Swedish prog-rock we listened to on the way home made sense.

Posted by Jason E. Weeks at 12:43 AM
Email ThisBlogThis!Share to TwitterShare to FacebookShare to Pinterest
Labels: Hiking, Outdoors