Cooper Spur is otherworldly, high above the tree-line where nothing grows but hardy grass and imagination. 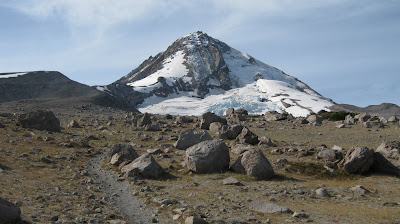 October is usually a fine month for hiking in the northwest, and this year is no exception. The skies have been clear, the temperatures moderate, and though the leaves haven’t turned as bright as I’d hoped, there’s still time to get up to the mountain. Not much time, though – as the days grow shorter in length, I have to get up earlier to get out, and that’s hard for someone who works swing and enjoys beer.

Cooper Spur is two hours away from , and the easiest route follows the through the gorge and up the fertile valley. A two-lane road narrows to a one-lane paved road, then turns into almost ten miles of rough gravel crossed by numerous water-bars. The drive itself is beautiful, winding through gorge, farmland, and the ghostly snags and ash left behind the Gnarl Ridge fire in 2008.

When I arrived at the trailhead at 10am last Tuesday, I had two goals: climb to Cooper Spur, and take photographs. In late September I drove here, short on time and without a memory card for my camera, or a pen for my journal. I spent a few short hours on a lower lateral moraine against the side of Eliot Glacier. The views were stupendous, and I vowed to come back.

The Cooper Spur trailhead is the highest on Hood, and the trail to the top of the spur is the highest formal trail on the mountain, starting at 5,850’ and quickly climbing to the summit at 8,514’. The air is thin and cool, but I shed layers as I walked through a forest of massive old-growth hemlock and entered Tilly Jane canyon. The sandy trail is filled with rocks and winds around massive boulders, dry water channels, and mats of ancient heather. Up-canyon, and Cooper Spur charge across the horizon, seemingly, tantalizingly close, with a hint of blue glacial ice just over the barren slope. After passing through a wind-sculpted forest of hemlock and white pine, I reached the Timberline Trail and the intersection with the Cooper Spur trail. 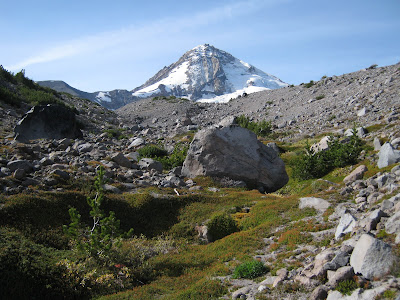 I trudged uphill to one of ’s few remaining 1930’s-era stone shelters. Inside were supplies left by other hikers: matches, cigarettes, a compass, tent poles, and other items useful in an emergency. This would be a beautiful place to camp. A rolled up door and metal roof protect the shelter from the elements, but there are enough flat spots to pitch a tent with a view that stretches hundreds of miles. Dawn here must be spectacular. 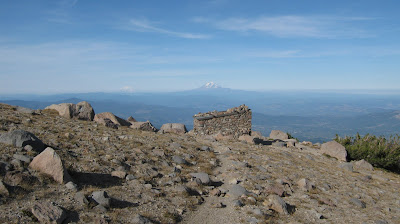 It’s hard to write convincingly about the Cooper Spur area. There is space, and there is the mountain filling up part of that space, wind and the rocky ground. The mountain is absolute, a jagged fang of sheer rock and ice. The space constantly shifts, with every step bringing a different slant of light, a warmer or colder breeze, a different angle to view the glacier slowly grinding downhill. There are no trees to block the sun, no other peaks and ranges to block the views of Cascade volcanoes floating above the horizon. It’s a landscape of stark beauty. More than one person has described hiking here like walking on the moon – over a certain elevation, there’s hardly any life to be found, other than rare, isolated blades of hardy grass and an occasional insect, or the shadowed cry of a blue-black raven. It’s all volcanic stone and sand, loose accumulations of rock fallen or blasted from the mountain, piled up by the glaciers and rinsed by the rain. Permanent snowfields reflect the sun, and even on clear days unpredictable weather washes over the sky and surrounds the summit with storms and the threat of storms, the potential for lightning and the thunderous silence of snow. 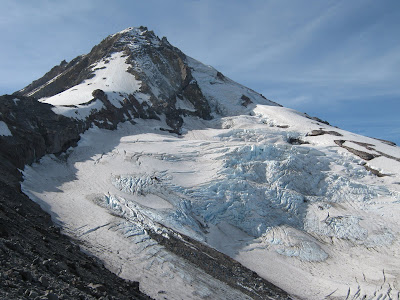 And there is distance, great distance.

Between the shelter and the summit, I saw only two other people, and they were descending. Given that only the certifiably insane would be climbing Hood so late in the season, it’s almost a certainty that I was the highest man on the mountain that afternoon, maybe the highest for hundreds of square miles. The climb is steeper than it looks from the shelter, but there are constant views of , Mt.Rainier, the , Goat Rocks, Indian Heaven, , and the Gorge peaks that seduced me into frequent stops. Gazing east, the high desert slipped into a gauze of haze and horizon. Below, Elk Meadows lay in autumn color in the bowl below Bluegrass Ridge, framed by and the Badger Creek wilderness, and Newton Creek ran almost a mile below me under Gnarl Ridge and Lambertson Butte. To the south, the lifts at Mt. Hood Meadows glinted in the sun, and the Newton Clark glacier fell away into deep blue ridges and valleys punctuated by and the Three Sisters. 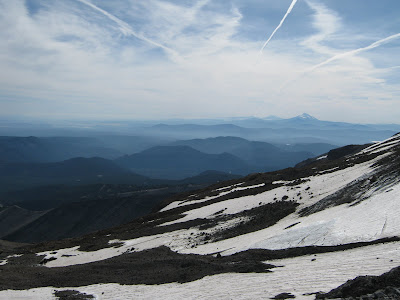 It’s hard not to gasp for breath in such thin air. 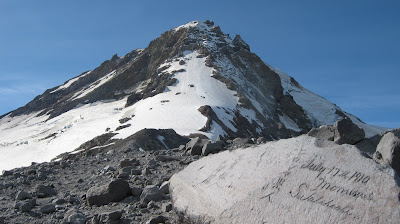 I climbed higher and higher, switch-backing up the spur until the trail disappeared under an icy snowfield. I backtracked and picked an off-trail route uphill until I reached the summit and laid down my pack by a wide circle of stones arranged as a windbreak. towered before me, and the Eliot Glacier fell from its cirque in a frozen river of ice falls, seracs, and crevasses. Hiroshima Rock, carved with kanji to commemorate a 1910 Japanese climbing expedition, reflected the afternoon light. A climber’s route led up a narrow spine past Tie-in Rock, the traditional place where climbers rope up before the technical climb between the Newton-Clark and the Eliot. Cold wind gusted from the ice, and in the bright, warm sun, I felt elemental, my weariness replaced by serenity. 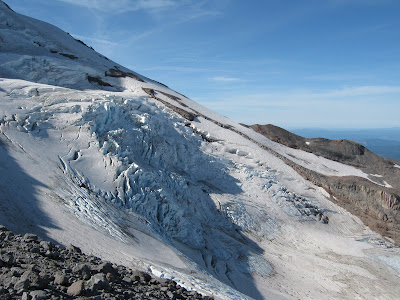 I stayed for an hour in an otherworldly trance, my attention occupied by the proximity of the mountain and the subtleties of the Eliot Glacier at my right. Eliot is the largest glacier on Hood, but it’s shrinking rapidly. Geologic time isn’t always measured in millennia. This high on Hood, I could hear the ice grinding and cracking, and the near-constant rumble and retort of rock-fall. From the edge of the spur, loose rock drops precipitously to the ice hundreds of feet below. It was sometimes nerve-wracking to hear mini-avalanches below my feet as I watched the light change on the ice: glacial-blue with an inner light in the ice-fall and crevasses, snow-covered and brilliant in the sun, dirty where rock had fallen onto the surface, and grades of gray and brown where the rock-covered terminus lapped at lateral moraines near the tree-line. 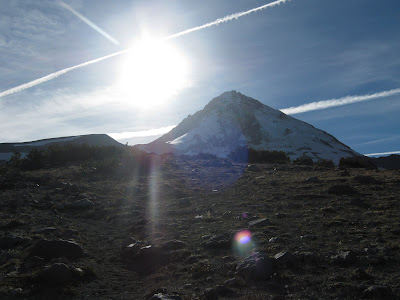 The sun began to sink and shadows encroached on the east face of the mountain like a wave. I took my time descending, caught between the show of evening light on the mountain and the glowing, deep color of the land below me. It’s hard to walk away from such an awesome sight, wandering through barren terrain and listening to the emptiness. But I reached the shelter and the Timberline Trail, and the wind-sculpted forest of hemlock and white pine. At the top of Tilly Jane canyon my shadow was long, and the sun blazed just above the mountain and the long dark spur. Ahead of me was a short hike to my truck, where a clean t-shirt, a change of socks, and a thermos of coffee waited for me. I still had to negotiate the gravel road and the drive through the gorge with the sunset in my windshield, but I felt utterly relaxed and cleansed, my worries gone. I hadn’t hiked in two rough weeks – and before I entered the trees I turned for one last look at the mountain. This was ’s parting shot – perhaps my last hike of the year in good weather, and a brilliant end to the season.
*****

Notes: ($30) or day permit ($5 at trailhead) required. Water and restroom available at the trailhead.

Directions: From , take I84 to and turn south on Highway 35. Drive approximately 23 miles and turn right, following signs for Cooper Spur Ski Resort. About 2 miles later, turn left onto , which becomes rough gravel for 9.5 miles. Between the gate at Inspiration Point and the trailhead, drive slowly and watch for large water-bars.