One Shot Wilderness: The Frozen Gorge

After a month and a half of rain and holiday madness, I was ready to get out. The weather cooperated on the first Tuesday of the year, and I found myself driving down I84 into the Columbia River Gorge, staring at the steely river flecked with whitecaps, and thinking about where I wanted to go. I decided to hike up , and from there, continue up to Devil’s Rest for some hiking in light snow, or on to Angel’s Rest for some wintery views. Neither was destined to happen.

At Multnomah, a ranger had just closed the trail beyond the because of ice. My return route – which doubled as an alternate entry-point – was closed because of a washout. It felt too late to continue east, so for my first hike of 2011, I elected to tour the waterfalls and stretch my legs between and Oneonta Gorge. I only hiked a few miles, but the frozen falls were spectacular, and I must have been an odd sight when I returned to my truck whistling a Phish song and tapping out the beat on my trekking poles. Not a bad start… 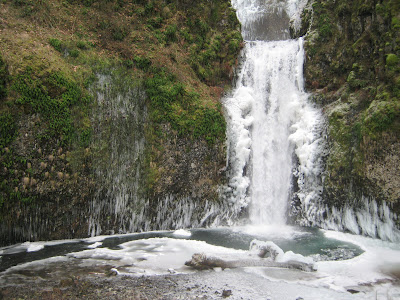 It wasn’t the iciest day I’ve seen in the gorge, but even a little ice adds incredible accents to familiar sights. Multnomah’s upper pool was much icier than the lower, more elemental and less alive, with ice forming patterns on black basalt and an overwhelming sense of stasis, as if winter’s grasp was complete and enduring. I much prefer how the ice in the lower pool contrasts with the green moss and fern on the cliffs, and the glacial blues of the water. Despite the cold, there’s a fragility to the ice and the still-verdant walls that speaks of spring and movement. I often use as a trailhead and I take it for granted, hiking past the crowds as fast as I can. But it retains the capacity to stun with beauty, and I was amazed that one single waterfall could create such a range of physical form and emotional response. I guess I’ll have to pay more attention in the future. 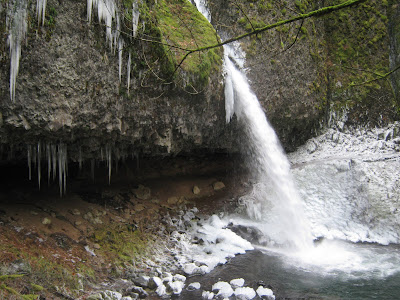 I admit I get nervous under . While navigating the boulders behind the falls, it doesn’t take much imagination to think about how swift your death would be if the ceiling collapsed. Or how agonizing, if you somehow survived, injured, trapped.

It’s almost worse in winter, when icicles form underneath the overhang. Ice forms where there’s water, and where else does the water come from but cracks leading up to the creek? If the ceiling has cracks in it, what am I doing underneath it?

Taking pictures of beautiful six-foot icicles, that’s what. Unfortunately, there weren’t many when I hiked here; according to a photographer I met, they’d all been broken by thoughtless tourists two days earlier. If that hadn’t happened, there would’ve been a good chance that some of the icicles would have reached the ground, and the entire ceiling would have been a glittering winter hall of pillars and spears.

And I’d have spent much more time taking photographs under the falls, ignoring the steady, erosive roar of falling water and taking my chances with the slow inexorable march of geologic time. 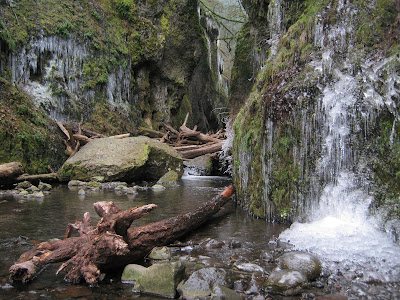 Entering Oneonta Gorge is like stepping back into time. The place is Jurassic – it reminds me of the Olympics, or the redwoods. The creek cuts a high, narrow canyon back through a thousand feet of basalt to a hundred-foot waterfall. To get to it, you have to climb over boulders and a tremendous logjam, and swim through pools of cold water clear to the colorful pebbles and gravel at the bottom. Moss and fern drape the canyon walls, home to endemic species of plants found no where else. Overhead, fallen trees carpeted with moss crisscross the canyon rim, and dark holes in the rock mark where lava flowed through an ancient forest and solidified.

Needless to say, I didn’t go swimming, and I didn’t get far into the canyon. I remember you used to be able to reach the logjam without getting wet, but I haven’t been to Oneonta in a few years, and creeks have a way of changing things quite rapidly. So I spent a lot of time studying the patterns of ice on the rock and moss, and photographing licorice fern encased in ice. Ferns have vascular systems like all other plants, yet reproduce with spores, which makes them halfway between the most primitive plants and more recently evolved flowering plants. Licorice fern is an epiphyte that grows in winter, with a rhizome (essentially a root) that tastes like you-know-what. Native tribes used it medicinally to fight colds, which might explain how the fern can survive being encased in ice – an ability that would certainly have come in handy over the millions of years ferns have been around. Unless it can’t survive in ice – and then never mind.

This is far from the best photo I’ve ever taken but it gives some idea of the wonder Edward Abbey wished for “behind the next turning of the canyon walls.” 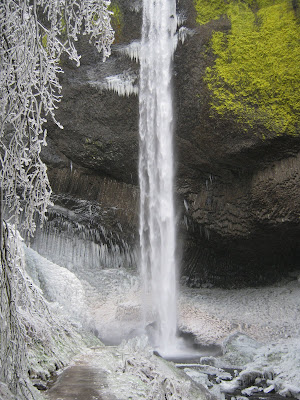 Chrysothrix chlorina gets a somewhat negative review in Daniel Mathews’ Cascade-Olympic Natural History: “This degenerate form of lichen growth is just a granular layer of fungi and algae bundled together in little clumps.” Maybe so, but it forms a beautiful chartreuse contrast to Latourell Fall’s icy white and stone black amphitheater.

Latourell is a gift I seldom open, because it’s a very short walk from the road-side trailhead and only a short hiking trail loops above it. It’s a shame I don’t stop more often, because Latourell is one of the Gorge’s most breathtaking falls. And it wears winter like a crown.

A graceful ribbon of water plunging 224 feet; basalt cooled into columns like a foundation of recessed pillars; trees sheathed in ice, a bridge hung with icicles, dark evergreens sentinel above. It’s the kind of place that feels remote because it begs of the remoteness in your heart, and draws it out with a quiet comfort. It’s lush in summer, but wispier, more transient; in winter, Latourell is a chandelier among lesser lights.

Among those lesser lights are the pioneering concrete bridge built over Latourell Creek in 1914 by Samuel Lancaster and KP Billner. Lancaster himself said, “The falls at Latourell can be seen from the bridge pouring their shining waters over the wall of basalt cliff where the rock is formed into pentagonal shapes which hang down like icicles. The Giant's Causeway of the is well known, but it offers no better example of rock crystallization. The roadway forms a suitable frame to the beautiful picture and adds a charm to the landscape.
And then there’s C. chlorine, the degenerate lichen, centuries old, far older than the bridge and Samuel Lancaster’s ambition, offering a much more exquisite frame to the natural ambition of water and stone.
Posted by Jason E. Weeks at 11:31 PM
Email ThisBlogThis!Share to TwitterShare to FacebookShare to Pinterest
Labels: Hiking, One Shot Wilderness, Outdoors