Winter in is bleak. The trails are muddy, the light crummy, and the foliage thin. Leafless vine maples bend their limbs under dark young firs, the fallen cottonwood and big-leaf maple leaves turn to mush under ragged bracken, and along the creek brown grass tangles with mud and the winter-washed banks. Winter is a time of waiting, and only the moss, lichen, and licorice fern seem to hold any promise of spring. And even then, only on rare days when the sun is shining and light fills the canyon. 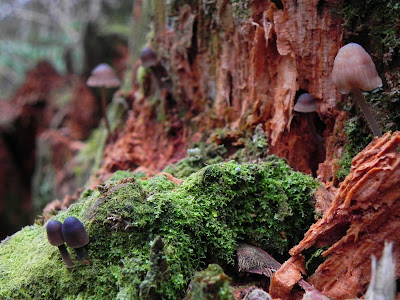 Tryon Creek is not, by any stretch of the term, wilderness. It’s less than 700 acres of second-growth forest, entirely surrounded by urban areas, and used by just about everyone: walkers, joggers, hikers, equestrians, bicyclists, students, and artists. The trail system is extensive, but at less than a seventh the size of , it can be a crowded place. Nevertheless, Tryon Creek has its charms.

One of those charms is the multitude of cedar stumps throughout the park. Relics from logging operations that began in the 1860’s, and development that lasted into the 1960’s, the stumps – many with springboard notches still evident – contain miniature ecosystems rarely noticed by the suburban joggers and dog-walkers. This photo is from a recent trip I took to Tryon Creek in order to play with a new camera and to get out of the house – and to check on British Soldiers. 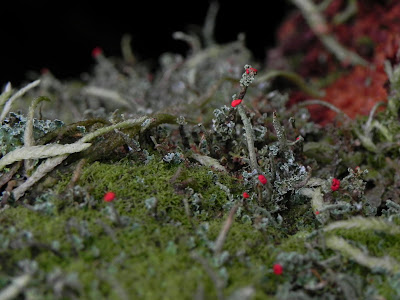 British Soldiers are lichen that produce red fruit at the end of a short stalk. Because lichen grow slowly and live long, they’re excellent indicators of environmental change, including that caused by pollution. Last year, I found a ton of British Soldiers in the stumps, along with a lot of small mushrooms. The hollow cores in the stumps provide protection against wind, rain, sun, and other environmental factors, and each is unique as an individual ecosystem. Because of the confined space, each of these ecosystems is subject to radical change – a large branch falling from a tree is but one branch in a forest, and hardly noticeable relative to the effect that same branch might have if it destroys a single stump.

There’s one particular stump – I’m keeping its location secret – that has a high number of British Soldiers. And this year, almost exactly a year after I last visited, the number of British Soldiers in fruit was much lower. I didn’t do a count, so I have no hard data. Call it a subjective guess. From photos, and from memory, the amount of this lichen was radically reduced.

That subjective comparison, in itself, is meaningless. There’s no way to draw a conclusion without real data based on long-term observation. Because these ecosystems are so sensitive, a huge number of factors come into play. Weather is just one; the difference in precipitation and temperature swings widely from year to year with equivalent impact on lichen growth.

Because of this uncertainty, I’m not worried about the apparent reduction in British Soldiers this year. I’m well aware that people might consider the very idea of being concerned about lichens a sign of mental instability. But next winter, I’ll probably find myself leaning into the rotten core of an ancient hemlock, taking close-up photographs of tiny lichen and wondering what it all means.

Posted by Jason E. Weeks at 11:32 AM
Email ThisBlogThis!Share to TwitterShare to FacebookShare to Pinterest
Labels: Hiking, One Shot Wilderness, Outdoors