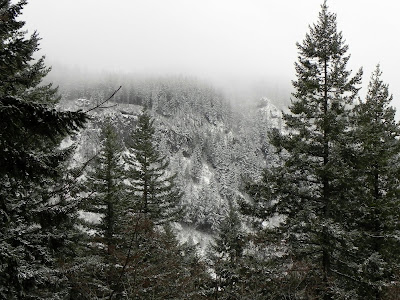 "We talk far too much… By contrast, how the gravity of Nature and her silence startle you, when you stand face to face with her, undistracted, before a barren ridge or in the desolation of the ancient hills.”
Goethe
There was no sound but the sound of my boots in fresh snow, and the wind gusting through the forest. The snow fell with a hush that was softer than silence. It covered the trail, the vine maples and ferns, and coated the trunks and limbs of trees. Through breaks in the forest, I saw the dark ridges rise from the hidden river, slowly into snow-covered cliffs and conifers weighed down with winter. As I hiked towards Wahkeena Springs, patchy snow glazed the trail, and snow began to fall hard and harder as I climbed the final 800’ towards the tree-enclosed summit of boulders at Devil’s Rest. 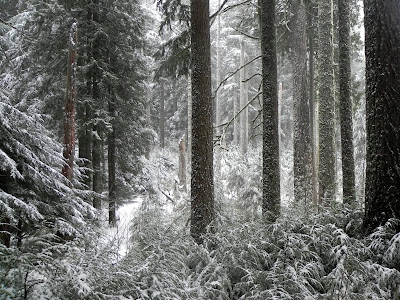 Snow purifies not by hiding, but by revealing. Four miles of hiking and a half-mile climb had worked off the distractions of home. There were no tracks ahead of me, and on the way back, fresh snow and drift rounded the edges of my boot-prints. The forest was calm and serene, with snow coating the young trees and scars from the last century’s logging. Clouds drifting in and out obscured the river’s trade, the highways and barges, the railroad tracks and the clear-cuts on distant hills.

The logging and the roads and rails were hidden, but I saw them through their absence: I did not see them visually, yet when I looked at the forest so different with snow, they suggested themselves in my mind. I felt that these things, these supposed imperfections on the purity of nature, signs of the world hikers strive to leave behind, weren’t even hidden, or in the process of being revealed – they were merely a part of the whole.

When I moved on from my reverie the snow still fell through second-growth forest, a stand of former timber left to mature at its own natural pace. The clouds sweeping up the ridge continued to screen the traffic and muffle its noise. And because I was not hiking wilderness, snow piling on old stumps and chainsaw-cut rounds of downed trees was allowed to be beautiful.

Hikers know the art of packing the critical, and also the weight and utility of it. Whatever is too heavy or isn’t useful gets left at home. At the summit of Devil’s Rest I set down my pack and poured a cup of hot green tea. 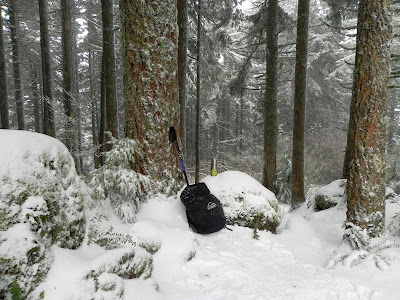 I stood for a long while in the silent young forest, watching the snow fall, breathing in the cold sharp air. Soft light filled the spaces between trees and the mossy boulders capped and crusted with snow. I was warm under synthetic layers and the warmth from the hot tea spread from my center to my limbs. I rested. I took photographs of my pack and gear in the snow. My pack was filled not just with the ten essentials and an extra sweater, but also with food and water, a journal, and a well-worn copy of the Dhammapada.

I had everything I needed.

The clouds began to lift and I left the summit with a lighter pack than when I arrived. The snow stopped falling, and yet as I descended Devil’s Rest there was no sound but the sound of my boots in fresh snow, and the wind gusting through the forest. 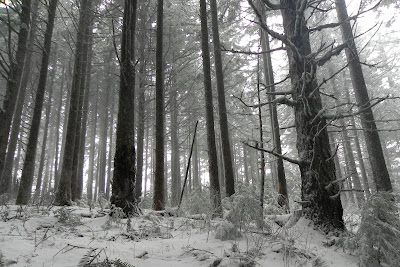