Scrambling Around the Labyrinth

A warm, fair day in February usually means crowds at Catherine Creek. I figured I could get away in the Labyrinth, a rugged area of imposing rock outcrops and hidden dells traversed by a maze of hiker, biker, and game trails.

I started out hiking near a young couple with two young children. I passed them, and then they passed me while I fiddled with my new camera. It seemed they were always nearby, and the point was to get away. 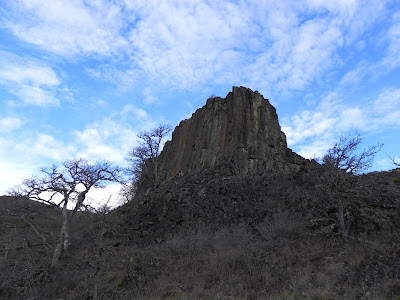 Pretty soon, though, I approached a massive outcrop of 50ft tall columnar basalt, sheer on every side but one, where a curtain of steep boulders reached to the very rim. I scrambled up to the base of the talus. A trail to the top suggested itself – at the very least, it was the beginning of a route – and my eye followed a line up the rocks and along the columns to the top. But I was alone, and at that moment I recalled a story I’d read of a climber’s death in a similar, albeit larger, boulder-field, and I thought about Aron Ralston, the guy who’d been pinned in a Utah slot-canyon and amputated his own hand to free himself. I thought about spraining or breaking a bone and having to negotiate my way down the boulders while injured. I visualized the loose boulders shifting without warning, crushing or trapping my leg or arm, or avalanching downhill with my body cushioning the fall of half-ton rocks. Hell, it would hurt just to fall on that surface.

Finally, I thought about the brilliance of placing my hands out of sight on top of boulders where rattlesnakes might be sunning themselves. One last look and I turned around, picking my way back to the trail.

Then that same family, kids and all, appeared below and started to hike a small game trail towards me. I spun around, walked back to the talus, and began to climb.

At first the going was easy and I felt that if it got harder, I could just turn around. But I was quick and balanced, sure-footed, the boulders were more firmly entrenched than I’d feared, and I never had to put my hands where I couldn’t see them. I reached the basalt columns. The route continued up a little until it ended at a five or six foot wall that was easy to pull myself over. I was on top.

I was on top, and I’d been here before. An ancient pine, silver and shattered, lay across the rock. A young ponderosa, squat and bushy, shaded a field of hand-sized stones covered with dusty orange and chartreuse lichen. Grass waved in the wind and I had a 360 degree view overlooking the Labyrinth and Catherine Creek, with the Columbia stretching east towards The Dalles, and the gorge stretching away west. All of this was familiar: I’d eaten lunch or taken a rest on many an outcrop such as this, and I knew that at the opposite side of this particular outcrop, the ground sloped gently down to meet the rising hill, and a game trail led back to the main trail. Breathing hard and pleased with myself for not giving up on the climb, I turned and looked down the talus. It was clear I’d misjudged the height by a factor of two – the family sat in the grass far below, perhaps a hundred feet or more, and the steepness of the boulders in the full sun was dizzying. 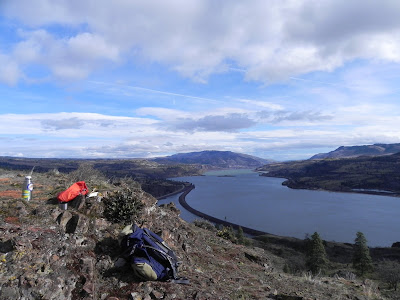 For a while I wandered slowly along the edge of the outcrop, over the jointed tops of smooth six-sided basalt columns, some peeling away from the rest, leaning outwards in denial of gravity. Away from the edge, the columns disappeared under a skein of angular stones decorated with hieroglyphic lichen. Climber’s bolts at the very edge of the columns reinforced my belief that I’d followed an actual route up the boulders, and that it hadn’t been unsafe. Unfortunately I didn’t pause to question why climbers would climb the talus to reach the bolts, rather than just walk up the other side.

I backed away from the edge and found a place to sit for an hour. I poured a cup of tea and soaked up the expansive view, then ate lunch in the steady breeze. Afterwards I wrote in my hiking journal:

Not even good for a first draft, but promising on a still-winter day when it was almost too windy to write. I stowed my gear and got ready to head down. 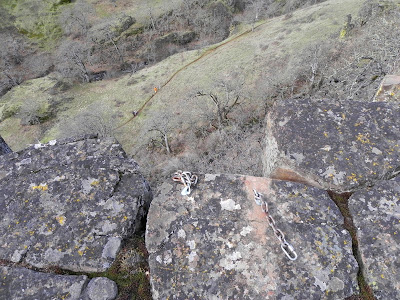 As I followed the edge I peered over into the small valley below. The trail was a sharp brown line swaying along the hillside. Tiny hikers walked along it, and beyond them, a small creek ran among leafless oak trees. The outcrop was a hundred yards long and higher in the middle, and I couldn’t see the far end until I reached it.

A fifty foot drop. Vertical basalt columns. Air and space, filled with wind. No gently sloping hillside, no game trail, not even a pile of rock to down-climb. I was wrong. There was no way off the top of this outcrop except by the way I’d come up.

Hurrying back to the talus, I thought of all the things that could go wrong on the descent. And I quickly discovered I hadn’t paid enough attention during the ascent: I didn’t know where I’d climbed over the top.

When I came up, a series of natural hand and footholds had aided me. I’d intended to use them on the way down, but things looked really different from above. Dropping a few feet from a hanging position isn’t dangerous, unless it’s a drop onto rocky, uneven ledge six inches wide at the top of a 100 foot fan of boulders sitting at the angle of repose. 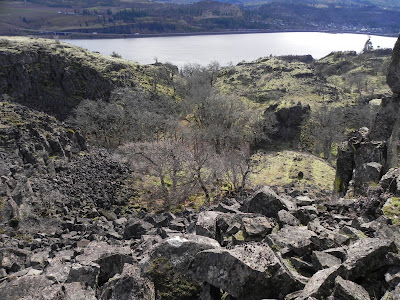 At this point I wasn’t scared. Obviously climbers came up and down this route, and I’d come up it with no problems. But going down was far harder than coming up. I studied the cliff until I was sure I’d found the line, and that led to where I needed to drop over the edge. I carefully lowered myself over, finding footholds and descending until I stood at the top of the boulders, and I cautiously moved to the columns, scouting the least steep route down the boulders. The problem was, it all looked far steeper than on the way up, and once I committed, I discovered that the boulders were not, in fact, wed in place, but were all loose and shifted under my weight.

If I faced the slope, I put too much weight on my hands while testing my footing. If I faced out, I put even more weight on my hands. Nothing felt right, or sure. Even though I moved slowly, always with three points of contact, every time a boulder shifted I froze, willing my body to balance. I thought about what would happen if I knocked a boulder loose, or what I would do if I felt the burning sting of a rattlesnake’s bite. I pirouetted down the slope, sometimes facing out, sometimes in, never comfortable, always nervous, in a heightened slow-motion dance with gravity and growing fear.

It took forever but I made it to the bottom. My quads burned with lactic acid, my knees felt weak, and I was cold in the sun. I covered the last few yards to the game trail, sipped some water, and took a deep breath. It was still early in the day and I was on solid ground. Before heading off deeper into the Labyrinth, I looked back at the solitary ponderosa on the rim, high above the boulder field.

It didn’t look that steep. Not really. 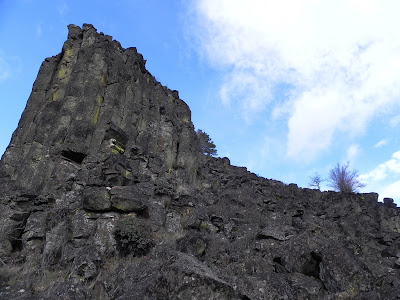