What Did I Just Crawl Through? Adventures in Mt. St. Helens’ Lava Tubes

I’m only about six feet in. It’s dark, extremely dark, and I’m on my hands and knees. My knees ache from the rough surface and my elbows knock against rock. In the darkness, something clamps around my foot, and I hear the voice of a young woman behind me: “Sorry,” she says, “I can’t see where I’m going.”

Ahead of me, I hear more voices, and the sudden strobe of a camera flash illuminates the narrow round walls of the tunnel and the dark silhouette of a man in front of me. We’re in a lava cast: a straight, cylindrical void formed when lava flowed over a forest and solidified, leaving behind the cast of a tree that burned away nearly two thousand years ago. 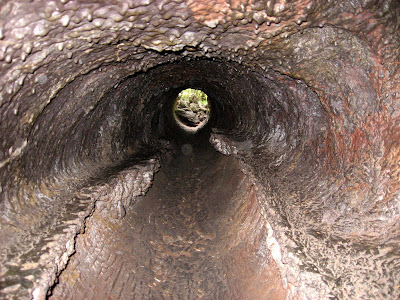 When I was a student at PSU, I signed up for every available geology department field trip I could. This particular trip, to ’s south side, took me underground through the tree casts of Trail of Two Forests, and in the eerie formations of .

A mountain known best for its deadly 1980 eruption, is young, erupting repeatedly over thousands of years. About 1,900 years ago, the volcano’s only known eruption of fluid basalt poured down the south flank of the mountain and created a formation known as the Cave Basalts. This flow left two outstanding geologic features: the lava casts at Trail of Two Forests, and , a short drive closer to the mountain. 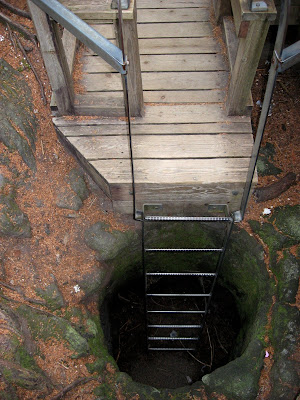 The Trail of Two Forests is a brief, beautiful boardwalk hike that loops over a layer of moss-covered basalt. The lava that solidified here had the viscosity of molasses, and as it surged through the ancient forest, the surface cooled into a ropey pahoehoe texture visible through breaks in the moss. The flow cooled quickly enough to leave behind tree casts: from the boardwalk, you can peer into round wells where trees once stood, and crawl through the horizontal shafts where lava swallowed fallen trees. The smooth sides of these casts are etched with the impressions of tree bark and the contact between cooling lava and the burning, charcoal tree.

Dark, confined spaces make me nervous, and the narrow confines of the tunnel, just big enough to crawl through on hands and knees, made me very nervous. But after going through once, emerging with scraped up elbows and bruised knees, I was ready to go again. I convinced two students to return to the tree cast after lunch and crawl through with me, this time with a camera. I’d lost my apprehension, and I felt exhilarated, ready to go on to .

is the longest lava tube in the continental . When lava cooled near the surface of the thick flow, it solidified into a crust, forming a subterranean tube that carried molten rock underground for miles. A boy scout troop first explored the cave in the 1950's, naming it after a local outdoor group called the St. Helens Apes. The hiking club took their name from a 1924 incident in nearby Ape Canyon, where a group of miners claimed to have been attacked by a family of Bigfoot. I didn't see any sign of sasquatch, but there were plenty of hominids present as a bus full of geology students pulled into the parking lot. 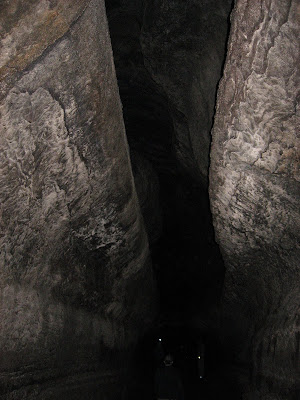 With a total length of over 13,000 feet, and with several sections requiring at least a gutsy willingness to scale difficult walls and rubble fields in the dark, we weren’t going to see the whole thing. Instead, we descended a wooden staircase through a skylight at the main entrance and followed the lower cave to its debris-blocked end. From the skylight – essentially just a hole in the cave’s collapsed ceiling – the lava tube descends gently into darkness lit only by flashlight and headlamp.

contains many features not found in caves formed from water erosion. There aren’t any stalactites or stalagmites, which require water and minerals to form. Instead, the walls and ceiling are smooth, and covered in an iridescent bacterium known as cave slime. The black and white zebra stripes are caused by water vapor condensing from the breath of people exploring the cool cave – remains a fairly constant 42 F year-round. 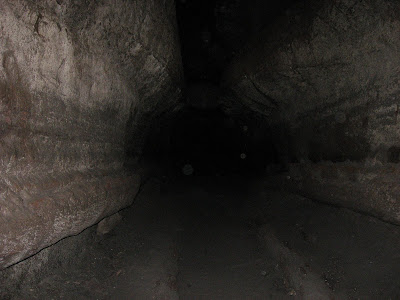 As the daylight filtering through the main entrance fades, strange patterns and formations loom from the headlamp darkness. The cave wall is collapsed in one section, revealing oxidized bedrock baked red by the heat of the lava behind the smooth, crust-like wall. The ceiling closes in and opens again, like walk-ways above the sandy floor. Known as the “railroads,” these protrusions were formed when the lava tube was half full, and the surface of the lava began to solidify over the flow. At points along the tube, the floor is covered in boulders that have fallen from the ceiling.

Called breakdown, the larger boulders sometimes wedge between the railroads extending from the walls. The most prominent, an oxidized boulder nicknamed the “meatball’ by cavers, is fused to the extended walls by the heat of the molten flow. The mostly sandy floor alternates with rocky rubble from minor wall and ceiling collapses, and smooth stone eroded by water running through the cave in the near past. Moisture in the cave drips from the ceiling, further eroding grooves in the stone floor. 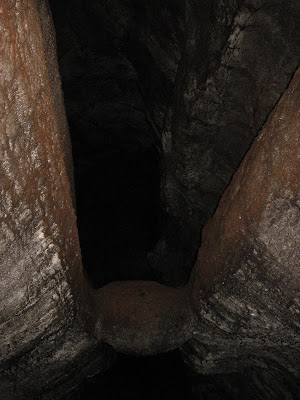 Everywhere the walls are brown, gray, black, white, glistening and smooth and when the lights are turned off, always silent… In the darkness, cupolas open overhead and the dim blue LED light from my headlamp filters into nothingness.

Elsewhere in the tube, the ceiling drops lower and begins to resemble the hall of a gothic cathedral or monastery, with a pointed arch extending into a dimly lit cavern, a ceiling patterned with cracks and water-formed lines that appear intentionally designed. The dusty floor here has levees, small ridges running parallel to the wall, as though to keep a flow of water between the wall and the floor. 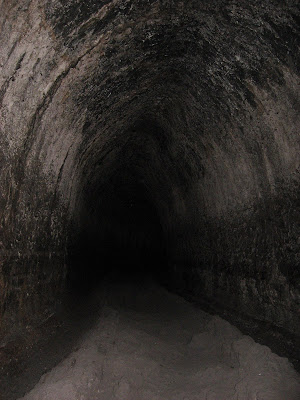 At the end of Ape Cave, the ceiling drops so low that to continue, I crawled on my belly like a lizard, with my arms and legs splayed out until I reached the final, tiny chamber. With just three people the chamber quickly became claustrophobic, and it began to fill up as a line of students, tourists, and hikers on the other side waited to crawl through and blocked the passage out. Shouting through the narrow tunnel, I stopped people from entering the tunnel long enough to crawled back out, where the darkness and air were far more expansive than the flashlight walls and heavy air at the end of . I walked slowly back to the entrance, and when I ascended the stairs and left the cave the sunlight was dazzling, and the sight and smell of the thick verdant forest made me feel as if I’d woken from a night of troubled dreams. I’d only been underground for an hour, but it felt like more, like the first day out after a prolonged illness.

Standing deep within , you gain a sense of how powerful the Earth is. It’s difficult to fathom the force and power of the molten lava that once flowed through the cave at a thousand degrees or more, but in the darkness it’s easy to let imagination and even fear run wild. And at Trail of Two Forests, the new forest overlying the ancient basalt flow that destroyed a forest and left casts of the trees that died there demonstrates the resiliency of natural forces and the interplay between creation and destruction.

As William Stafford said, “The answers are inside the mountains.”