The Day I Lived Through a Volcanic Eruption! 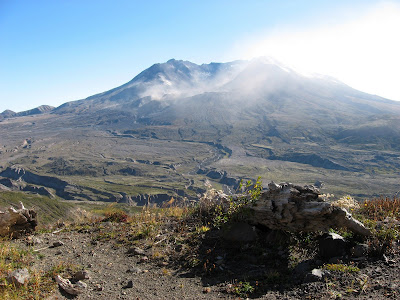 On clear days in , is a truncated cone, snowy white in winter and spring and turning to a smoggy purplish brown in summer and fall. But looking at the mountain from the north, at Johnston Ridge Observatory, the volcano is alien and terrible, a chasm filled with steam and smoke rising from wreckage like a beast from Mordor. The spires of the crater rim overlook a breach that opens onto devastated fields, the scale of which distance magnifies rather than diminishes in power.

In October, 2004, came to life again. A series of small eruptions and lava flows formed a dome inside the crater, surrounded by Crater Glacier, the northwest’s youngest. Although these eruptions were confined to the crater, they continued for several years, prompting authorities to limit access to the mountain. Two years later, the volcano was still actively erupting lava, the dome continued to grow, and occasional plumes of steam and ash rose above the crater rim.

October 21st, 2006 was a cool, clear day. Along with other students in ’s geology department, I was at the mountain, studying the debris flow along the and witnessing the lingering destruction caused by the 1980 eruption. Our second-to-last stop was at Johnston Ridge Observatory, directly facing the crater and only five miles distant. From the paved trails at the observatory, we could see across a shattered landscape into the crater itself. 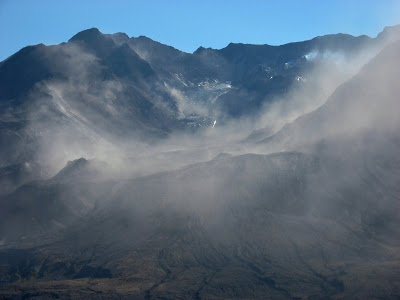 The land has something of a Shakespearean tragedy to it, suggesting “Bare ruined choirs where late the sweet birds sang.” Facing north and west, I looked over miles of barren hills where once a forest stood. Today there is nothing there but stones and stumps, and blasted trees lay against the ground in neat rows as in a cemetery. Deer and elk, bear and mountain lion once roamed these slopes, shaded by old-growth hemlock and fir. You used to be able to hear running water among the dappled forest sunlight. You used to be able to hear the haunting calls of spotted owls and listen to the insistent tapping of pileated woodpeckers. If you sat still long enough, you used to be able to catch the iridescent greens of hummingbirds and the yellow flash of tanagers.

Now the land’s silence on a clear sunny day is unfathomable and deep. It does not draw tears or catch your breath, because it exists in long moments of untethered wonder. Listen, it seems to say, to the songs that are gone. 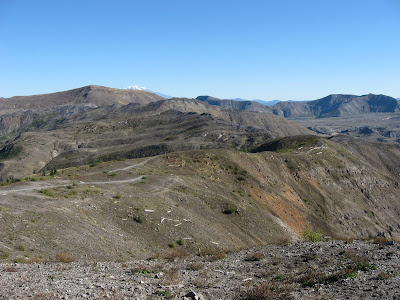 I looked away to the south, to the source of this absence lording over it. There was like a tyrannical father in repose, wreathed in smoke and silence, full of brooding violence and swift judgment.

Steam rose from the dome and filled the crater – although I was too far away to see it, the slow eruption continued, with fresh lava pushing the dome skyward, melting the glacier and surrounding the crater rim with a gauzy haze. The valley before the breach was filled with hundreds of vertical feet of debris blasted from the guts of the mountain, a graveyard plain of pumice and pulverized rock scoured by mudflows and clouds of super-heated gas, layered with ash and split by stinking fumaroles. It was almost entirely lifeless, with only a few pioneering trees and hardy tufts of grass covering the slopes above tortured gullies and young river channels. 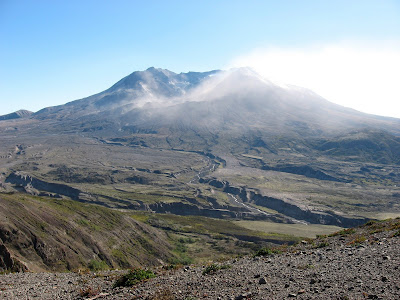 It was a very different view that day in 1980 when vulcanologist David Johnston watched the entire north face of the mountain slide towards him, leaving him just enough time to radio “Vancouver! ! This is it!” before the lateral blast of the eruption swept a thousand feet up and over the ridge that now bears his name.

It’s hard not to feel this landscape in your throat.

Inside the observatory, after viewing a film about , the eruption, and the aftermath, the curtains in the theater rose to reveal windows with a direct view of the crater and the scoured landscape in front of it. It was a forceful moment, as my film-oriented academic understanding of the eruption was again replaced with a gut-level, instinctual comprehension of the scope of the event.

We left the observatory in mid-afternoon and drove to , spreading out to hike along the shore. Even here, on the far side of Johnston Ridge, the power of the mountain was evident. Barren brown ridges, still covered in matchstick-like trees blown down by the eruption, surrounded the deep blue waters. Along the shore, alder and other shrubs – still the first wave of succession – grew thick and low, obscuring the view of above Johnston Ridge. 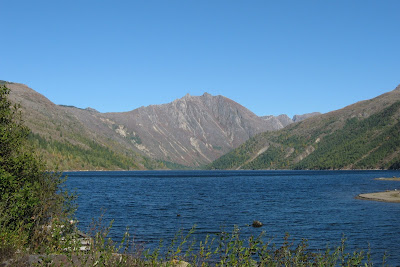 I was near the front of the group with Professor Scott Burns when, at 3:13 pm, shouts filtered up from the rear: “Professor Burns, come quick!”

Turning around, I expected to find out that someone had hurt themselves, or had seen something unusual. It was the latter. At a clearing near the lake’s outlet, the alder parted for a view of , and from the volcano’s jagged rim a dirty white cloud expanded in the air like a time-lapse thunderhead gathering strength. The volcano was erupting. 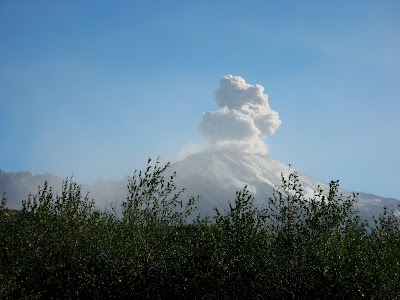 A bus-load of geology students went into full geek mode. Professor Burns began an impromptu lecture as the ash-cloud gained height and spilled out of the crater. For the next ten or fifteen minutes, the plume – filled with gray ash and white steam – rose two thousand feet above the mountain and spread west in the wind. But the eruption was short-lived, and as the plume began to disperse, we wandered back towards the bus.

It’s hard to say what it was like to witness this. I found out later that a magnitude 3.5 earthquake shook the nascent dome, collapsed a spire of rock, and caused the small eruption. I never felt the quake, and I was never in danger; the eruption never truly left the crater and ejected only steam and ash. But it was exhilarating all the same – and yet, rather anticlimactic. 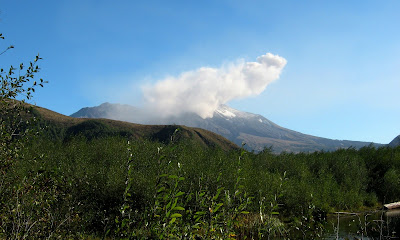 I’d previously seen ash clouds from minor eruptions all the way from , but I’d never been so close. And while this eruption was hardly anticipated, it felt removed. I stood on the cool shore of a large lake, with a fresh breeze shaking the alder leaves, and watched what might as well have been a cloud for fifteen minutes. There was no explosion, no ash-fall, no tremor in the earth. It’s hard to feel endangered at such a distance, especially in a crowd of professors and college kids more excited to take photographs than to consider the rarity and meaning of what they were aiming their cameras at. To take a photograph is said to steal a soul; in times like this, I’d argue that it steals your own.

As a group, we’d grown up on the 1980 eruption. Even if we weren’t alive then, or weren’t living in the northwest, we’d still studied that event and had, just half an hour before, been at the edge of the precipice. That was fresh in our minds, but hidden somewhat behind ridges of stone and familiarity. My background knowledge somehow dulled the emotional impact of what I saw – it removed the mystery, the edge. I can’t speak for everyone, of course, and I’m not saying I wasn’t excited. All I can say is that my excitement was more of an academic sort, full of intellectual perambulations quite opposite the hysterical running a larger eruption would’ve produced.

It wasn’t any of that. To portray it that way is to live through the photographs I took, and embellish the story at the expense of the experience. My experience at Johnston Ridge was more powerful than my experience of the eruption, which was strange and significant precisely because of its lack of significance. And yet…“It would’ve been a trip,” Professor Burns said, “to have that happen when we were up there at Johnston Ridge.”