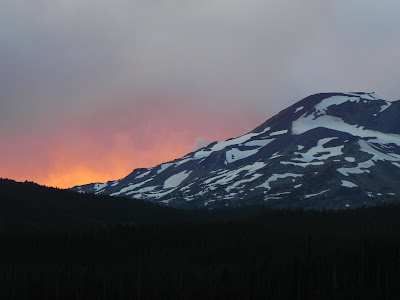 In late August I drove up the from and the weather turned from fire-ban hot and dry to lightning-strike thunder and rain. I barely had my tent set up at Soda Creek campground when rain began to fall, huge drops that pelted the ground and splashed mud over the base of everything. Lightning strobed through the trees and thunder exploded like a marching band of heavy metal drums. Soon my tent was staked above a puddle, and I was huddled under a tree, trying to stay somewhat dry as thunderstorms broke over and rumbled overhead. 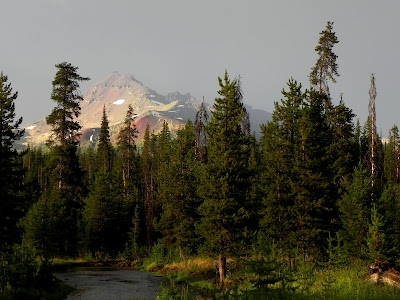 Soda Creek campground is a beautiful place, on the edge of a meadow between and South Sister. The creek runs clear and strong through the meadow, and from its edge, there are superb views of South Sister and Broken Top, as well lava flows, stars, deer, and storms. The storms didn’t let up – even after I went to bed, my tent lit up with lightning, and I’d count the seconds for the thunder. 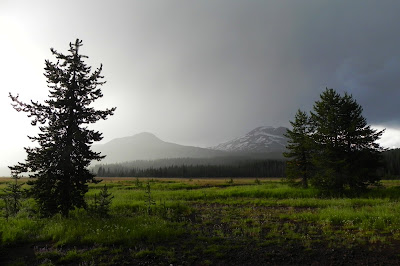 When I arrived, I didn’t know that the storms would last all night. I kept a tidy camp and lit a small fire, but kept it hot enough to burn through the rain and cook dinner. The storms passed in waves. One moment the air would be clear, with no rain, and I could wander to the meadow to watch the cells collide over the peaks. At those times, the sun shone through cloud-breaks with rich warmth, drenching the grass and trees with light. The next moment, lightning would flash behind me and I’d retreat to the camp before the next bruising thunderhead raced overhead, bringing rain, darkness, and probing lightning strikes. 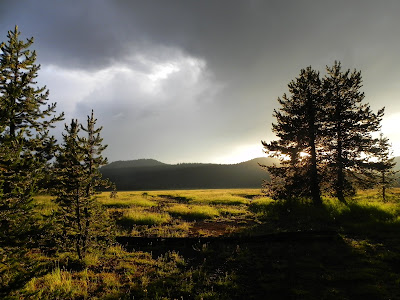 Flash. Boom. No time between them – and no sense of security huddled under a tree. At one point I sat inside my truck, but my wet clothes turned the cab into a sauna within minutes, and I went back out in the storm. I thought about the backpackers who were camped up on the mountain at and , and how it must feel to experience this trapped in a tent in alpine country. I thought about how people throughout time have been inspired by thunder and lightning storms, how those elements have passed into myth, how they’ve inspired gods. I thought about the possible weather the next day, and questioned my plans to hike high on South Sister.

Back in the meadow, the sun set in spectacular fashion. Nature was on display, modeling everything she had. Cells continued to roll through, from Bachelor to South Sister, from Bachelor to Broken Top. Between the storms, light poured through the gap where the highway turned south at Devil’s . The meadows grew golden in the low angled light, then fell into shadow as the peaks hoarded the last sun on their snowy flanks. Behind South Sister, sunset fires burned. 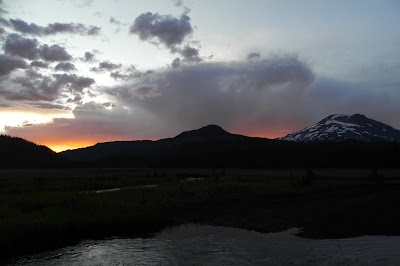 Whiskey burned, too. If you’re standing in a storm you might as well drink right from the bottle. I didn’t have that much, but that’s because I also had beer. And a little liquid courage goes a long way in a liquid downpour. After nightfall I realized that as challenging as the storms had been mentally, they had pushed me to remain positive and to be accepting of the circumstances. And when the storms decreased in intensity, in duration, and in proximity, I started to miss them. I threw more wood on the fire. 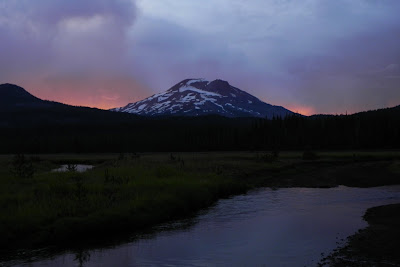 The clouds began to thin, the storms became more isolated and infrequent. As night grew deeper, a few stars spackled the breaks between clouds. The Big Dipper, Ursa Major, ploughed through the clouds and poured some sort of cosmic energy onto South Sister. But lightning still flashed on the slopes of , and far behind the jagged summit of Broken Top. I crawled into my tent, shed wet layers, laid out my dry clothes and slipped into my sleeping bag. This would turn out to be a very different trip than I envisioned if the storms kept up through the next evening.
Posted by Jason E. Weeks at 11:52 PM
Email ThisBlogThis!Share to TwitterShare to FacebookShare to Pinterest
Labels: Hiking, Outdoors