I've had some memorable encounters with elk. In 2005 I woke in in September when the stream was frozen and my hands were numb, and before the sun rose I watched elk pound up a steep talus on the side of . In 2006 my friend and I paused while hiking in to watch a herd pass through the riparian forest, sun-dappled and brown. In 2010, another friend wrapped herself in firelight at the foggy coast and stirred the ashes shaman-like with an elk bone she found while scavenging firewood.

And last April, at the coast with my brother, we crept up to a herd of elk grazing on the dune-grass plain at Bayocean Spit. 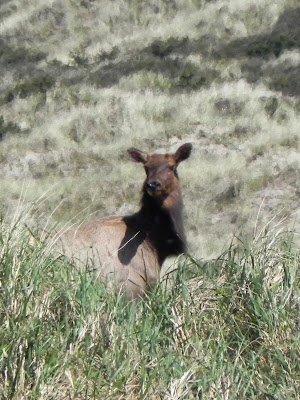 The morning was bright and cool from recent rain, with a fresh wind off the ocean. I was surprised to see elk in such open territory and so close to the beach. A forest of shore-pine and Douglas fir lies further north, and that’s where I’d expect to find elk, not out in the dune-grass.

But there they were, twelve or fifteen cows in the sandy dunes to the south. In the sun, their tan backs and sepia heads blended perfectly with the landscape, looking at a distance just like tussocks of grass. Only when they moved could we see them well, well-muscled and tawny-rumped, with long dark hair hanging from thick necks.

We walked the beach south for several hundred yards and cut back inland behind the herd, so that we faced north, away from the sun. The herd knew we were there and slowly moved away while my brother crept closer with his camera. Eric and the elk slipped quietly through the grassy hollows, Eric with his finger on the shutter and the elk with cautious movements interrupted by grazing or the cast of a critical eye. 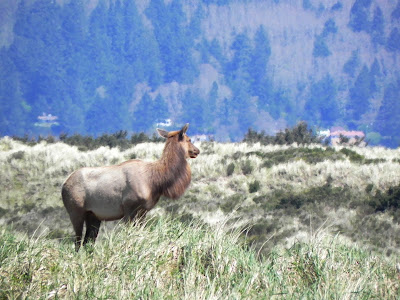 I watched from a tall dune: Eric, the elk, waves of heat above the grass, a patchwork of logged hills and billowing clouds across the bay. The elk disappeared into the land like ghosts returning to the earth, and Eric slowly headed back. I heard the sound of surf. I heard the cry of gulls. Taken together, it became a blessing.
Posted by Jason E. Weeks at 5:18 PM
Email ThisBlogThis!Share to TwitterShare to FacebookShare to Pinterest
Labels: Animals, Hiking, Outdoors