Hiking Light at the Painted Hills

Hikers know all about traveling light. We look for the lightest gear that serves multiple purposes, and study ways to cut ounces without sacrificing comfort, safety, or durability. But there’s more than one way to travel light, and hiking the Painted Hills is one of them. 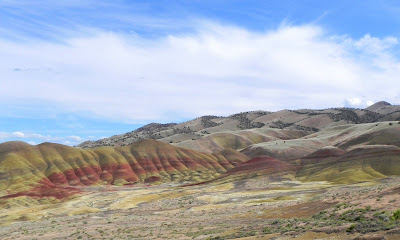 I’d planned this trip for months, but something always got in the way. Then, in July, I found a short window of time and loaded my truck for two days of driving, hiking, and camping in the central desert. I left in the morning, drove over , and continued on through the Ochocos, a beautiful range of ponderosa and deep grass. By early afternoon, close to the small town of , I turned off the highway towards the .

I hadn’t done much desert hiking previously, and didn’t know what to expect. I ate lunch at the small park near the visitor’s entrance and studied a map of the monument’s short trails. On paper, exploring looked deceptively easy, but I knew that this would be more than the sum of miles and elevation gain. And it was.

If a deer leaps in front of your car when you’re driving, you react immediately – a jolt of adrenaline, a little fear, an instant decision between swerving and braking – followed, afterwards, by a little rush. When you first see the Painted Hills, it’s a bit like that. 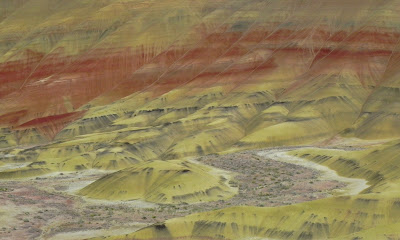 I didn’t drive far before encountering the star of the show – a huge, exposed hillside of volcanic ash millions of years old, compressed into layers of bright red, yellow, gold, brown, and black. The hill rose above a dry sage-brush flat, and stretched beneath a deep blue sky over distant hills full of summer grass and juniper.

For the rest of the afternoon, I wandered in splendor. At the Painted Hills Overlook I walked up the short trail for close-up views. Colors shifted in scales, growing in intensity in the sun, or falling mute in the shadows of clouds. The hills were an orchestra playing a unique symphony, with measure upon measure of light built up and reflected from the banded ash. Strange scars from rock-fall led like lyrics through the gradations of color, and the longer I watched, the more I felt the hills were unbearably old, unfathomably subtle, wearing wisdom as a spectrum of ever-changing light. 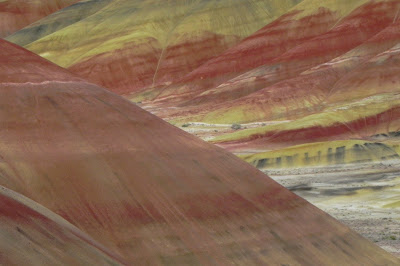 Eventually I returned to my truck and drove on to the Painted Cove, where a short boardwalk winds around a single red painted hill. As the afternoon grew long, the depth of the color grew deeper, contrasting wonderfully with dark green junipers and bright yellow blossoms of rabbit-brush. 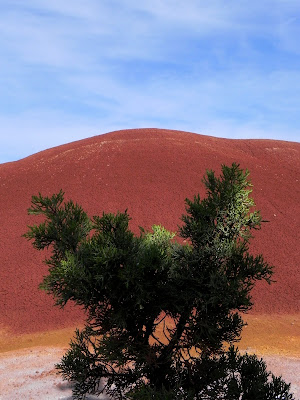 After soaking in Painted Cove, I walked around Leaf Hill, an outcrop full of fossil leaves, then returned to the Overlook and hiked to the top of Carroll Rim for expansive views of the Painted Hills. The steep trail soon crested the ridge-top, passing through rim-rock and odd basalt formations.

The views changed constantly along the length of the rim, with patterns of evening light and shadow dancing on the hills. Basalt speckled with ancient lichen lent a timeless feel to the scenery. This was once a volcanically active region, with lavas pouring across the land and ash falling into tropical waters. I’d catch a glimpse of the inhabitants of this dynamic landscape later, but on top of Carroll Rim, in the sun, with the Painted Hills below, I felt part of something very old still moving towards some unknown purpose. 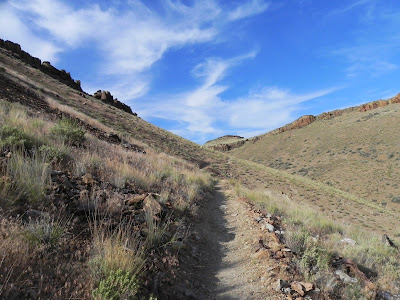 T.S. Eliot may have felt the same when he penned “I should have been a pair of ragged claws / scuttling across the floors of silent seas.”

It was time to go – if I wanted to make camp, I couldn’t watch the sunset. I hiked back down the trail and left the Painted Hills. It wasn’t a sad moment. In fact, it was exciting. I was on my way to the river, where I’d sit at a fire, stare at the stars, drink bourbon, write in my journal, and remember the hills. I especially looked forward to remembering the girl. 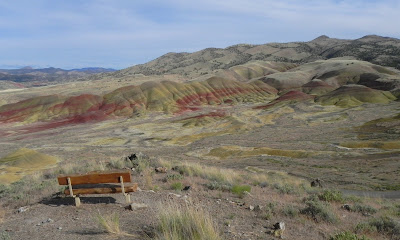 If the Painted Hills were ancient and filled with light, the girl was youth incarnate and made of light. As I made my way through the Painted Hills, she and her family leapfrogged viewpoints with me. At the Overlook, she burst from the car and ran up the trail ahead of her family; she was eager and strong in the sun, with long black hair streaming from under a straw hat, and smooth tanned limbs flowing from a blue country dress. In her late twenties, she was beautiful, and if anything were more beautiful than the light on the hills, it was her.

It was like a doe had leapt in front of my truck.

We have immense capacity for love. Many of us will fall in love many times. In all those different times, we carry an ideal in our hearts – a type, a perfect representation of all that we seek in love. That true life never mirrors this ideal hardly matters; what matters here is that this young woman was emblematic of my ideal. And as a symbol – because I never exchanged more than a few words with her – she remains that ideal, unobjectified but unknown, and still pure. I did not fall in love with her – I fell in love with the idea of her.

When I returned to the parking lot at the overlook, a Native American man with a long braid and strong features sat on a bench in the shade. As I approached, he asked, “Have you seen my tribe?” His family (I learned his daughter’s name) had passed me on the trail, and Donny (not his real name) and I began a long conversation. He was taking his family traveling and camping, getting back to the natural world. It was a healing trip. He’d flown his daughter home from a bad spot on the east coast. He told me all about her, about how when she was young, she’d wake him in the mornings, begging to go fishing on the Sandy and the Clackamas. Naming those rivers – for naming is a powerful spell – led to the discovery that Donny and I live near each other in the same city. It’s a small world.

Later we met again at Leaf Hill, and Donny introduced me to his family. His daughter was shy, her eyes dark and guarded, yet she moved with confidence, in her element. In contrast, his younger sons displayed outward annoyance and the look of wanting a television and a video game. I wished them all a good trip, and drove on to Carroll Rim for that wider perspective. 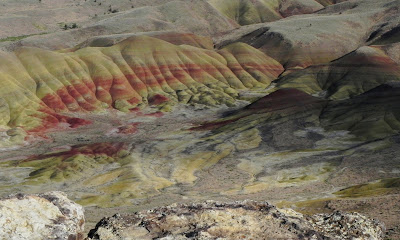 None of this is a good explanation of how I felt at the Painted Hills, nor is it a good description of Donny’s daughter and why she stood out in such relief. As I said, I don’t love her. I can’t; I don’t even know her. And I can’t exaggerate or make this complicated, because it’s surprisingly simple. Donny’s daughter moved as if she belonged there, as if her presence was necessary. She was just one more beautiful aspect of a beautiful landscape. She was all-to-human, frail, and fleeting – and the world she moved through was stark, elemental and enduring. And there was power in that.

Later, in the BLM campground at Spray Creek, by the shores of the river, I watched the sun set and the stars come out, and I tried to express my thoughts and feelings in writing. I still haven’t succeeded. I’m working as slow as the Painted Hills, and the light isn’t done with me yet. 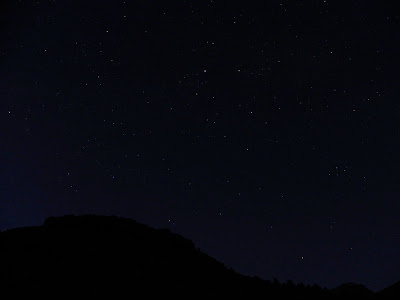 Posted by Jason E. Weeks at 10:39 AM
Email ThisBlogThis!Share to TwitterShare to FacebookShare to Pinterest
Labels: Hiking, Outdoors, Writing