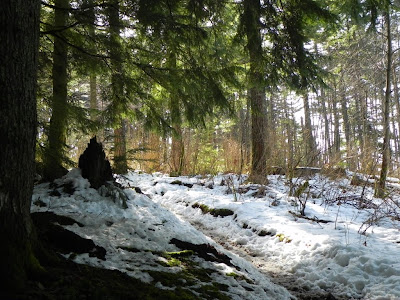 “If one is patient,” he said, “if one is careful, I think there is probably nothing that cannot be retrieved.”

The crowds dismay me as soon as I arrive at the trailhead. It shouldn’t be a surprise how many people are here on a very nice Sunday in early March. But I haven’t been on a solid hike with a bunch of elevation and distance since last October, and a lot of my favorite trails need extensive maintenance to open, or are too deeply covered in snow. So I pass through frustrating groups of tourists sipping coffee and taking photos, cross the narrow Benson Bridge, “put on the afterburners” and climb past day trippers, slow hikers, families with strollers and babies on their backs, running kids, and leash-less dogs. At last I reach the top of the falls and the paved trail turns to rock and earth, thinning the crowds. I can finally catch my breath.

A mile later, at the intersection with the Wahkeena trail, a sign says the bridge further up on the trail is damaged and unsafe. I walk up to look. A couple in their 50’s is on the other side, dressed in rain-pants and knee-high gaiters, with snowshoes strapped to their packs. “Crossed it six times since they closed it,” says the man after he strides across. “You’ll find snow on Devil’s Rest.”

I stop for a break at the top of the Wahkeena trail. Two trails drop down to , one heads west to Angel’s Rest, and a third climbs up to Devil’s Rest. I look up into the trees – tall second-growth doug fir, old branches draped in moss, crowns of deep green needles against a clear blue sky. A shadow sweeps by – a crow chases another in and out of the canopy, darting around trees in a game of tag, cawing in the forest.

I don’t prefer blonds, but the one with her friends a little distance away is unbelievably stunning, with rosy cheeks and a contagious smile, in her mid-twenties, and wearing hiking clothes that excite my imagination. It is not too early in the season to find flowers in the wilderness. She and her friends hike on, leaving no trace.

Below Devil’s Rest, I put yaktracks on my boots for extra traction. An older woman descends the trail and stops to chat. She tells me the trail ahead is filled with snow, and beautiful. She recently had surgery, but since her recovery, she's has hit the trail every weekend. She says her doctor probably wouldn’t agree with her climbing to Devil’s Rest, but she can’t help it. I’ve been in her position, and we part with mutual words of encouragement. 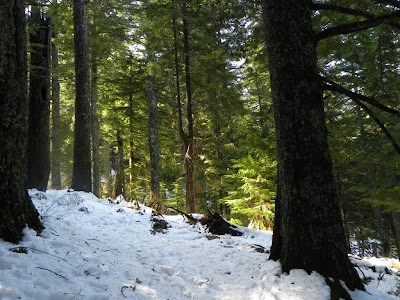 In the snow, just before the summit, a man in a t-shirt and ear-buds asks where the overlook is. He seems lost, but competent. I send him down the trail a half mile. Another man passes me, dressed to climb Hood. He’s almost running down the trail in crampons. He’s Japanese, speaks broken English, and seems lost in his own good way.

Finally at the summit, I take off my pack and pour green tea. There’s no view, just a jumble of mossy green boulders in the sun. Movement catches my eye: a large crow glides past at eye level, and with a single caw and a flap of its wings, it disappears into the trees. Voices rise up from the trail below.

It’s a very fit man with a bushy moustache. His daughter follows him to the summit. “Here we are,” he says. “Now you’ve seen it.” They stay a few moments, and depart.

Next come two women with a black lab and two whippets. One of the whippets whimpers with cold. A young man follows close behind. He has a GPS and seems to be the hike leader, a loose designation because all three hikers seem to be exploring the network of trails around here without definite plans. One of the women asks Jason for the time; I look at my watch and almost answer. Then, laughing at myself, I pack up my thermos and put on my pack.

I don’t take more than a few steps when two trail runners arrive in shorts and light windbreakers, carrying water bottles in their hands. They stay just a minute before running off. Damn them. I struggled to get up here and they’re running ahead of me, hooting in the trees. 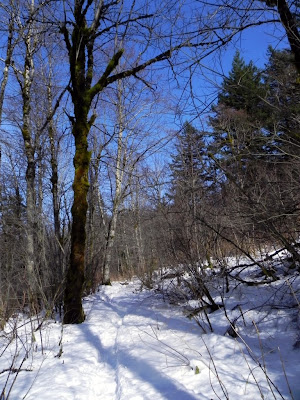 I take the Foxglove trail, a user-maintained path leading west and down from the summit of Devil’s Rest. It joins the Angel’s Rest trail going back to Wahkeena. Suddenly, there are two familiar faces, a younger couple dressed in t-shirts. I’d seen them on the way to Devil’s Rest, and remarked how great it felt to be able to hike in t-shirts. They happily agreed then, but they don’t look happy now. The man just looks tired, but the woman looks cold and frustrated. Without thinking, I say “Haven’t I seen you before?” They don’t respond, and I spend the next half-mile thinking how creepy that comment may have sounded. In the end, I decide it doesn’t matter.

Once on the Angel’s Rest trail, the snow thins and disappears. I stop a few times to take pictures, and a young woman overtakes me by Wahkeena Spring. When I say hello, she smiles shyly back, and continues on. I let her get ahead and keep hiking, but soon she and I are in an unspoken race to stay ahead of a large group of loud, ill-equipped hikers carrying lap-dogs in their arms as they descend the steep, muddy Wahkeena trail. 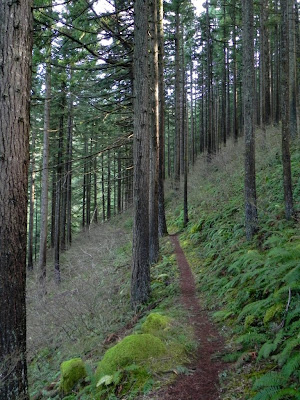 I’m getting hungry now. I haven’t eaten lunch, and in my haste to avoid others, I’ve passed by several good lunch spots. But I’m almost back to the trailhead. Just as the canyon narrows to allow only a steep trail alongside a falling white-water creek, I pass two overweight women struggling uphill. I can see by their gear and their faces that they’re determined and serious. I say hello and one of them beams a giant smile at me. It wins the smile of the day, for sure – this is their trail too, and I like seeing them enjoy it in spite of, or maybe because of, the challenge it presents to them.

I’m giddy but tired while walking through the crowded old highway parking lot at . An elderly woman in a group walks right at me, not moving out of the way at all. I step aside, right up against a line of parked cars. The woman continues forward. My trekking poles are stashed horizontally across my pack, and the tip is at this woman’s eye level. I can’t move out of the way, and she won’t move, so I give up. The sharp tip of the trekking pole misses her eye by about two inches.

Back in the main parking lot, I walk past a bunch of bikers clad in leather standing around their Harleys, and I watch kids playing Frisbee in the grass. I feel great – sore, but in a good way, and peacefully energized. Pouring coffee from a thermos, I take off my boots and socks and join everyone else in enjoying the late afternoon sun. Devil’s Rest is out of sight above the steep, thousand-foot cliffs, and is in shadow. One of the bikers starts his engine and the rumble sets off the car alarm in the Subaru next to me. Then a crow flies overhead, cawing in the clear blue sky.