If you doubt mountains walking you do not know your own walking.

In February I was in a head-space filled with moss and mud that sucked at my ambition. Better the real thing, I thought, so I went to Cape Falcon, where rain whipped over cliffs and the sea foamed and thundered in rocky coves. By the time I reached the tip of the cape, my pants were soaked and stained with mud to the knees. My hands were cold and my glasses misted with salt, and gray clouds hung over the beach and nearby Neahkanie Mountain. Out there, it looked and felt like the Pacific Northwest is supposed to – a rain-battered rugged coast dark with misty forests, swept by a steady wind and the occasional cry of a gull. Imagine a Chinese landscape scroll, with a solitary figure in the corner – laughably small, but necessary. 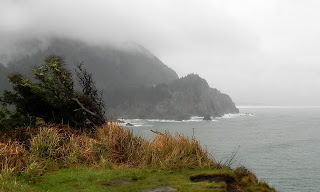 I almost didn’t go - bleak weather, laziness, and so on - but by early afternoon I was lacing my boots at the trailhead. Fifty yards later, the forest swallowed the noise of traffic, and I began to hear thousands of drops of water. Rain fell gently through the trees, splashed against leaves and spruce needles, dripped from glossy salal, and gurgled in flowing puddles. Dense, moody, and a hundred shades of green, the old-growth trapped the air and hushed sound. Mushrooms and ferns grew in the shade of sitka spruce eight feet in diameter, and old-man’s beard hung from colonnades of young trees rooted in decayed nurse logs. Time means little in these pockets of coastal forest, which seem endless and ancient and unhurried. The air is rich with loam and hummus, a heady conifer scent, and the salt of the ocean breeze. Even in daylight there are places where it stays dim, and February clouds only accentuate the atmospherics. Where the forest opens up, the light becomes voluptuous: moss and lichen cover everything in a soft carpet of green, and the light appears from everywhere at once, silvery and shadowless. 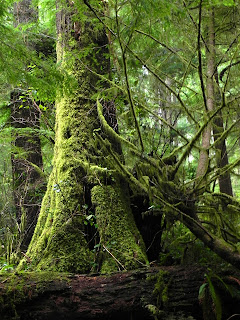 Eventually the forest opened onto a headland covered with dense thickets of salal and studded with wind-warped pine and spruce. Tunneling through wet brush to viewpoints on the south side of the cape, I looked south to Nehalem Spit and towards the ancient vision sites on the cloudy summit of Neakhanie Mountain, and ate lunch beneath a bonsai-shaped spruce above a steep cove. For an hour, I watched ocean swells slowly moving towards land, rising in sea-green waves that curled and exploded on a black gravel beach. Gulls drifted over the spray, and reddish-brown sea-weed drifted like bruises beneath the waves. Twice, more than a mile offshore, a puff of white and a dark comma of black showed where gray whales were feeding – year-long residents, maybe, or following their whale-roads north or south. 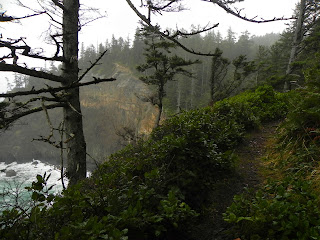 By this point I’d become so wet that I simply decided to stay wet, and wandered out towards the tip of the cape, trying to keep my camera dry and staying warm by moving. I came around a corner and encountered another hiker with his back to me, dancing slowly and grooving to headphones under a hood.

I said hello and he didn’t hear me. I tried again to get his attention, but couldn’t. This was getting awkward, and annoying – this guy was stationed exactly where I wanted to be, at the best, most remote viewpoint on the entire cape. I backed off and approached one more time, finally getting his attention. After a polite exchange I passed him, but came back quickly from the steep, slick, exposed trail at the end of the cape. When I returned he offered me a smoke, and so for the next half-hour we talked about things common to people who meet in February rain at the end of a cape jutting into the Pacific Ocean. I told him about seeing whales, and we talked about the migratory habits of grays. He pointed out bald eagles on a distant cliff, and I recommended he visit the Klickitat River to see their winter nesting grounds. We talked about mushroom hunting and rumors of Spanish gold on Neahkanie. We talked about Native Americans and Chinook Jargon, smallpox and Lewis and Clark, John Jacob Astor. And of course, we talked about hiking.

In Portland, if I’d passed this guy on the street, I probably wouldn’t even look at him. And he wouldn’t look at me. But just the fact of being out on the cape meant we had something in common, had something to talk about. We both get it.
My initial annoyance with this interuption of solitude had turned to enjoyment of the conversation we shared. Solitude while hiking is a wonderful thing, but it’s not the only thing. We can’t truly “get away” in nature without losing ourselves. We carry our selves into wilderness, and wildness includes other people, actually can’t exist without people – not because we define its boundaries semantically or on a map, but because nature necessarily includes us. Most of us are simply too far removed to even be aware we’re removed. But the rain that falls in Portland is the same rain that falls on Cape Falcon. And the wild forests I walk in at Cape Falcon are just as wild and real and vital as those in my mind when I walk garbage out to the dumpster by my home in the city. That’s what Dōgen was getting at, and what Gary Snyder meant when he said “To know the spirit of a place is to realize that you are part of a part and that the whole is made of parts, each of which is whole. You start with the part you are whole in.” 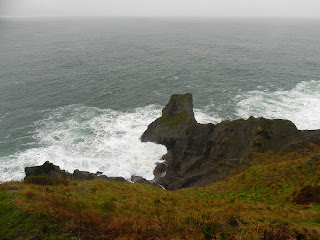 Before I left the end of the cape, I took one long last look at the sea crashing against the cliffs. Low clouds drifted among the shore-pine and spruce, and swells rolled in towards Short Sands beach and surfers in the scroll of waves. A gull flew overhead, and I heard in the wind the sound of it laughing.
Posted by Jason E. Weeks at 10:45 AM
Email ThisBlogThis!Share to TwitterShare to FacebookShare to Pinterest