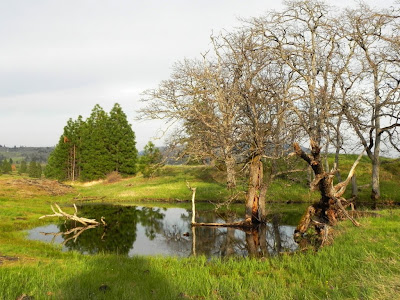 Two days after Easter and I find myself back at the ponds at Catherine Creek. I hiked to the top of Tracey Hill and down the west side. Now I have time to fill, and the sun, which has been muted and shadow-less for hours behind thin cloud, has burned through. Still a few hours from sunset, but warm, in the sixties, and aside from a sometimes cool and always intermittent breeze, it’s been a fine day.

It’s been very quiet most of the day, and still – silence filled with darting birds and birdsong. Meadowlarks and startled killdeer, black crows and blue jays, buzzards, hawks, eagles – going up Tracey Hill I turned for no reason and a northern harrier swept low across the massive meadow, wings held in a motionless v, and looped around a stand of ponderosa before disappearing from sight. Coming down into Catherine Creek valley, a bald eagle lifted from the ground and perched for some minutes in a tree, then flew away with slow wing-beats when I approached.

I hiked past the bathtub and past the deer-kill I found last March. Not much remains but a skull in the flowers, a segment of vertebra with thick green grass outlining white bone. Hard to believe anything is left of it. 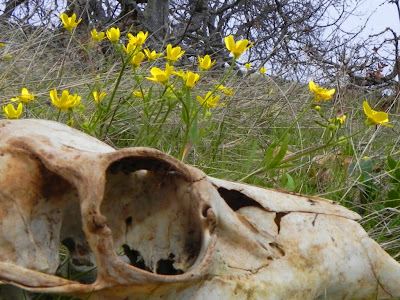 No deer, but sign everywhere: tracks, droppings, paths made for hoofs in the moss and stone. I haven’t been in the right place to see them, I guess, but it’s a warm day and only 6pm. Time yet. Grass widows are mostly gone but other flowers have taken their place. Buttercups are everywhere, alongside oaks toothwort and blue-eyed mary in the duff. There are shooting stars in the hundreds by the Dharma tree, and a carpet of glacier lily in the gully above the arch Yellow and purple desert parsley turn basalt crags and gnarled solitary oak into refined oriental gardens. Hound’s-tooth attracts bees and saxifrage fills the lower meadows, while lupine is everywhere about to bloom, and deep green bitterroot leaves are waiting. A few balsamroot brighten the cliffs.

After saying hello to some hikers near the arch, I didn’t speak again until almost back at the creek crossing several hours later, when I told a circling bee that “I am not a flower.” 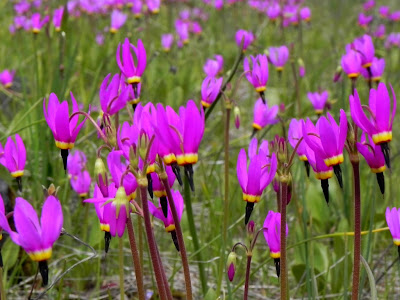 Things are drying out and the oaks are beginning to bud. Everything is stirring. Up on Tracey Hill, coyote scat – gray, filled with hair and fragments of bone – lines the trail between labyrinths of gopher tunnels and dirt upturned into patterns like gopher writing.

Another change: above the corral, the ponderosa limb with that unusual growth has died and fallen; no sign of the growth left among the limbs and twigs in the grass. The tree looks healthy. 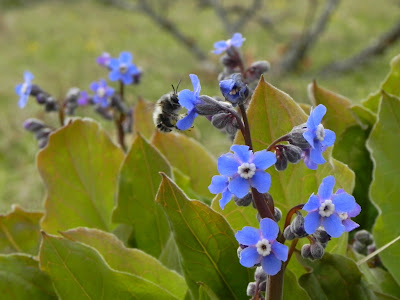 Almost to the end of this journal. Almost two years… Started at Crater Lake in 2010. Looking back makes me wish I’d written more. It also makes me realize how many miles I’ve traveled, how much I’ve seen, how much there is to come.

Mallards zip by overhead, a pair. Just a chuckle in greeting and they’re gone over the river. A good day for birds. 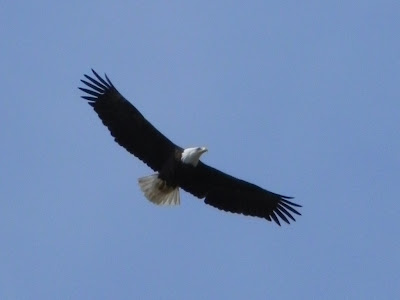 When I saw the harrier, it was because I felt I should turn around at that exact moment. It was different from stopping to catch my breath, or to look at the view. Irrational, but knowledge nonetheless. How much goes on behind me, when I’m not looking?

My thoughts have ranged up and down these trails with no order. But a natural order, a wild order. It’s a good day to sign off in this volume and move on to the next, with more looking behind and more looking ahead: next weekend, wherever it finds me. But first the drive home, a tick-check and shower, a beer and music while I look through the photos I’ve taken.

I’ll bet none of those photos will do today justice. None of them will last like that harrier on the wing.

Finis.
Posted by Jason E. Weeks at 10:49 AM
Email ThisBlogThis!Share to TwitterShare to FacebookShare to Pinterest