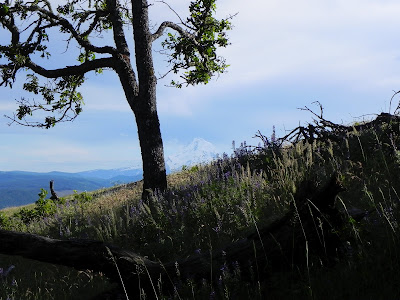 Catherine Creek in the early evening on the Summer Solstice, with my Nikon CoolPix P100.

Ah, summer solstice. I placed this photo into March because it has an odd, subdued quality that feels old-timey to me, and more suited for a month more usually noted for rain. This photo was taken at quarter to six, on a hike when three friends and I stayed out until dark on the longest day of the year. I took this from the inside edge of an oak grove near Catherine Creek at a thousand feet above the Columbia, with the sun still a few hours from setting. Mosquitoes were biting in the shade and my friends were all ahead of me, but the combination of lupine, grass, oak, and mountain was too good to pass up, and the absence of middle distance made framing easy. The light was perfect, too: a soft, warm glow with strong shadows and backlit flowers and grass.

One of my photography goals is to take a photo that exactly looks like what I saw. This is one of the few times where I was successful in capturing both the subject and the mood, and it’s also one of the few times that required nothing more than pointing an expensive gadget at the scenery and pressing a button. I’m not saying this is a great shot, but I’m happy with it. If I’d had more time, and more knowledge, I’d have taken a better photograph. Anyone could’ve taken this – the camera did most of the work – but still, it was one of those moments where everything lined up, where the light and the mood were matched, and where all I had to do was click the shutter.

It all fell into place – just like the day.

I was lucky with this one, but I set myself up to take advantage of it, in part because I was still learning about and playing with my camera (I’d only had it a few months) and I’d already set up the camera to shoot in that light. All I needed to do was adjust the exposure.

A snapshot doesn’t take much preparation or thought. There’s usually not much preamble, and there’s nothing wrong with that. Sometimes a snapshot is all you want or need. That’s what the auto setting is for.

When I hike, photography isn’t usually my main objective. But sometimes it is – a tremendous viewpoint, or a sunset from camp, or a scene in poor light all require a bit more from the photographer, and that’s where knowledge, skill, and effort come into play.

Effort is what gets you to the shot – the hike, in this case. Knowledge and skill are what allow you to take a good photograph. I don’t really have either. All that f/ stuff is mumbo-jumbo to me, but I do know how to make certain useful adjustments on my camera, and I know how to frame a photograph (when I bother to remember). The more complicated things get, though, the more distance I feel there is between me and the subject. Lots of things can go wrong in that space. But that space can be bridged.

Taking a really good nature or landscape photograph (and I’m not claiming this photo is one) requires a different way of observing and approaching to wilderness. It requires hiking for a different reason than I do – the interaction with the subject is different, but just as intense as with a hiker, backpacker, or hunter. It’s deeper than the casual hike with a few snapshots. It goes beyond the surface to touch on subtle things and profound things, things with emotional and psychological and spiritual meaning. The photograph isn’t just gifted to you. You have to be prepared for it, and be ready for it. And then you have to pay attention for a long time.

As I said, photography isn’t my main reason for hiking. But it does bring with it a bit of that different approach, and it adds variety and nuance to my experience. And sometimes, I take a photograph I really like.
Posted by Jason E. Weeks at 1:43 PM
Email ThisBlogThis!Share to TwitterShare to FacebookShare to Pinterest
Labels: Calendar 2011, Hiking, One Shot Wilderness, Photography