For my first "hike" of the year, my brother and I sought out icy waterfalls along the old Columbia River Highway in the Gorge. Every year, there's a period of cold, dry weather that allows the many waterfalls, streams, and seeps in the gorge to freeze, with patterns of ice decorating the rock and building up in splash-pools. I've written about this before, and wanted to write about this trip, but it took a while to figure out what to write about. The entire time was subdued, from the music in the truck to the last-minute mellow decision-making to the white noise of waterfalls and falling snow. Nothing stood out as a subject; I had to look for the little beauties in the day. And I found them, to a degree: an empty snail shell, a brightly colored ginger leaf covered in frost, a fern frond frozen in ice. Also, time in the quiet, the spaces between the trees.

We started at Latourell Falls. Something about that stark amphitheater, with its black rock columns and incandescent yellow-green lichen and tall thin column of water, makes me feel spiritually and aesthetically at ease. It was one of the first solo hikes I ever took, up above the falls to another fall and back. But because it’s such a short hike, I’ve rarely been back, until I rediscovered Latourell in winter. Now it feels comfortably beautiful, like meeting an ex lover years later and becoming friends again, only without the heartache or loss or what-ifs or attraction (although she’s still gorgeous). Maybe that only happens in books, but it could happen – and if it did, it would be a good metaphor for Latourell Falls.

It’s definitely my favorite waterfall in the gorge. 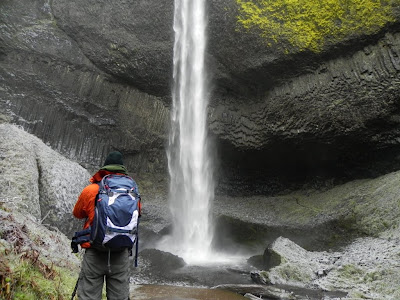 Before we arrived at Latourell I mentally drew a connection to my last hike, in November with my friend Mike. That day, on our hike to Tamanawas Falls on Election Day, we hiked around a corner along the creek and saw a coyote. It stood in profile on a green log, and for a second or two we all froze – Mike behind me let out a brief “whoa” – then the coyote leapt down towards the creek, jumped across the stream onto a mossy boulder, and jumped again to the opposite bank before vanishing in the trees.

The entire encounter only lasted about five seconds, and was the highlight of the hike. I see deer quite frequently, elk occasionally, but this was only my third coyote, and each time it’s been a memorable and moving experience.

What made me remember the Tamanwas hike on the drive to the Gorge was the neat symmetry between the end-of-season hike to a gorgeous waterfall with the start-of-season hike to another gorgeous waterfall. This was fairly unplanned; Eric and I intended to visit Latourell, but we hadn’t made up our mind to start there, or somewhere else in the Gorge. And because this symmetry, I found myself a few nights later reading Ella Clark’s Indian Legends of the Pacific Northwest.

Clark selected over one hundred native tales from oral and written records (including her own interviews with native storytellers) and in 1953 rewrote them for a general audience. She looked for stories that were authentic and interesting, and she freely admitted that her approach wasn’t “sociological or anthropological.” She was, however, a strong storyteller, and the book covers a lot of territory. I opened it for two reasons: first, to find a definition for the word Tamanawas, and second, to look for a myth I barely remembered that involved Latourell Falls.

Clark states that the word Tamanawas comes from the Chinook jargon, a trade language shared and spoken by tribes all along the Columbia River and eventually throughout the northwest. As a shared language, Chinook jargon was quite adaptive and many English and French words found their way into the jargon, which was spoken well into the 20th century. Some of these words – potlatch, for example – are still in use in the Pacific Northwest today, and many are familiar as place names (such as tyee, skookum, and cultus).

Tamanwas is difficult to define because it is more of a concept than it is a noun or adjective. Clark provides several shorthand definitions, including “supernatural,” “one endowed with supernatural power,” and “anything beyond human understanding.” Lewis “Tam” McArthur, in his essential Oregon Geographic Names, specifies that Tamanawas means “friendly or guardian spirit” (he also notes that Tamanawas Falls was named by the USFS). I’ve seen Tamanawas elsewhere defined in much more complex and nebulous terms as having to do with spirits, which are themselves as shifting and unpredictable as language and meaning – or coyote, for that matter, who makes an appearance in the Latourell Falls myth in Indian Legends of the Pacific Northwest.

In Clark’s telling, three Beaver sisters had built a dam across the Columbia that prevented salmon from swimming upstream. Because of this, the people living above the dam were starving, so Coyote went to break the dam. After breaking the dam, he kidnapped the youngest of the three Beaver sisters, made his getaway by running across the backs of the salmon swimming upstream through the break in the dam, and made the youngest Beaver Sister his wife. She bore him two sons, but Coyote was afraid that she’d run away, so he locked her and their sons in a cave. Eventually they escaped, and ran towards the river. Coyote caught his wife, scooped away out part of a mountain, and pinned her to the rock – she became Latourelle Falls. Then he caught his sons, who he changed into standing stones – the Pillars of Hercules that now stand by the side of the river.

And at this point, the symmetry between the hikes was complete and utterly fitting, as though designed. Tamanawas Falls, a place of spirits where I saw Coyote on my last hike of 2012. Latourelle Falls, unexpectedly the first stop of 2013 and associated with Coyote in myth. Two hikes, two beautiful waterfalls, two connections with Coyote and the electric sense of the Other.

Eric and I spent the rest of the day visiting other waterfalls, photographing ice formations, and wandering trails in gently falling snow. It was good to get out, good for the body and mind, and good for contemplating little beauties and hidden connections. Tamanawas indeed.

Posted by Jason E. Weeks at 10:51 AM
Email ThisBlogThis!Share to TwitterShare to FacebookShare to Pinterest